Meanwhile, away from the stock market mania…

Income from wages and salaries that consumers earned in December ticked up to a new record, as high earners and executives were making lots of money working from home though 10 million other people, mostly lower income, had lost their jobs; and income from unemployment insurance for those less lucky ones jumped. But spending on goods fell again as Americans cut back after the binge, and spending on services remained at dismal levels.

Income from wages and salaries, including from self-employment, rose by 0.5% in December from November, to a new record of $9.67 trillion (annual rate), according to the Bureau of Economic Analysis. This level “in aggregate” of all earners combined reflects that many people, particularly high earners, have done exceedingly well during this pandemic even as 10 million others – many of them lower-paid workers – lost their work and remain out of work: 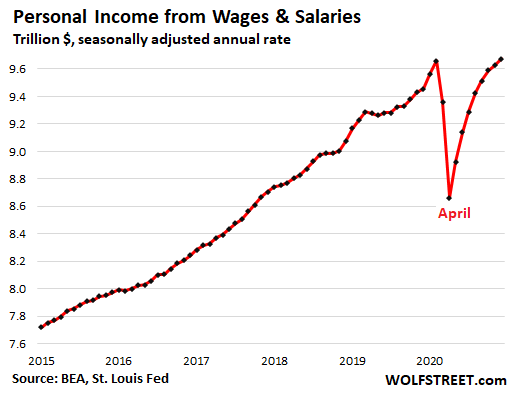 The chart below shows the results from the BLS survey of households (red) and establishments (green), in millions of people with jobs. The blue line indicates the progression of jobs needed to cover population growth: 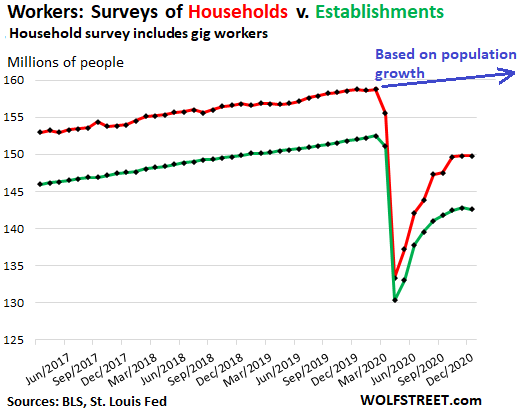 So lots of people have lost their work. But many people working from home have done exceedingly well, and executives have done superbly well. Executives getting raises and bonuses worth millions of dollars lifts an entire income bucket full of low-paid workers. In addition, quite a few industries have boomed due to the shifts during the Pandemic – including real estate and ecommerce and everything around ecommerce, from warehousing to transportation.

Income from unemployment insurance (UI) jumped 14% in December to $321 billion (annual rate), from the crisis low in November. During the peak in June, it had exploded to $1.40 trillion, powered by the new federal unemployment benefit programs.

The new $600 stimulus payments started pouring into bank accounts on December 29. Some of these payments may have been captured in today’s data. The BEA adds stimulus payments to welfare and other payments, which before the Pandemic amounted to roughly $500 billion (annual rate). In December, the combined stimulus and welfare payments rose 5.6% to $654 billion from November.

UI, stimulus, and welfare combined jumped by 8.3% from November to $975 billion (annual rate) in December but remain much lower than the huge spike in the spring: 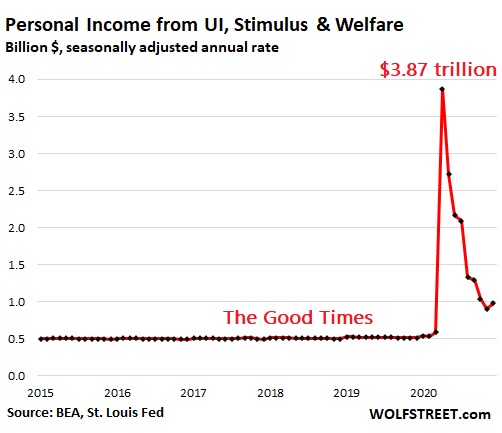 This produces the Pandemic Money Overshoot, with stimulus and unemployment payments (red) generating much more income than was lost in wages and salaries (green), which is in part what triggered the Weirdest Economy Ever: 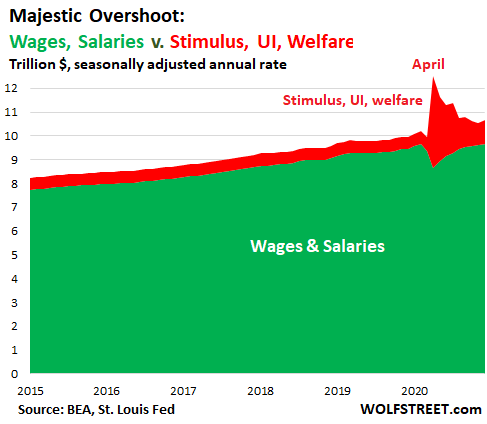 Government transfer payments to persons under Social Security, Medicare, Medicaid, and the Veterans Administration rose by 5.7% from February to $2.78 trillion (annual rate). Though Medicare, Medicaid, and many VA benefits are paid to healthcare providers, they’re considered “personal income” because patients are the beneficiaries of the services.

Personal income from all sources in December ticked up 0.6% from November, which had been the lowest since March, to a seasonally adjusted annual rate of $19.57 trillion, according to data from the Bureau of Economic Analysis today. It was down 7.2% from the stimulus-and-extra-unemployment spike in April. Compared to the Good Times a year ago, total personal income was up 4.1%. The actual income for all of 2020 was $19.73 trillion, for an average of $1.65 trillion per month: 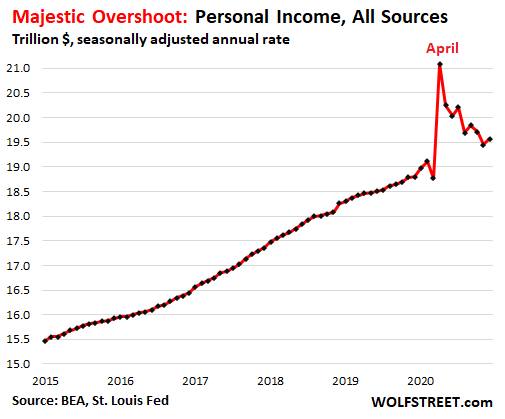 And Americans cut back.

Total consumer spending in December edged down 0.2% from November to $14.49 trillion (annual rate), the second month in a row of declines. Compared to the Good Times a year ago, spending was down 2.1%. The decline was due to bigger drops in spending on goods, particularly durable goods. 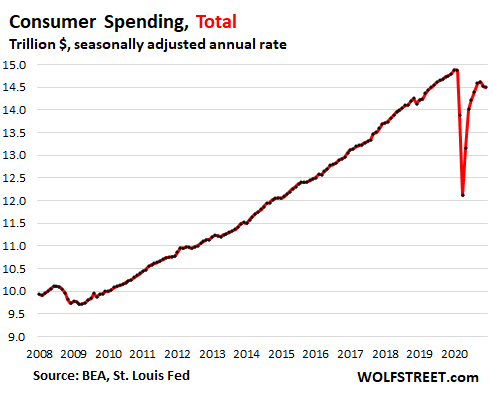 Spending on durable goods fell 1.0% from November and 3.6% from October, to $1.73 trillion (annual rate), the lowest since July. But this was still up 13.0% from a year ago as consumers had spent a portion of the Pandemic money on laptops, smartphones, appliances, new vehicles, or rowing machines – I just learned that the models by the most established brand are still on backorder. Many of these products or their components are imported, leading to a record trade deficit. 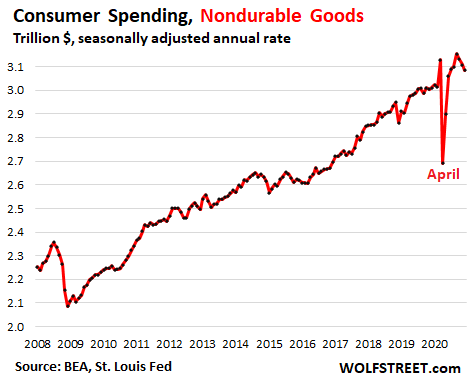 Spending on services was essentially flat in December with November, and at $9.6 trillion (annual rate) was down 5.4% from a year ago, and was down 6.1% from the Good Times February.

For the year 2020, spending on services dropped 5.4% to $9.49 trillion. Services matter. And they’re mostly produced in the US, rather than imported. They accounted for 65% of total consumer spending in December and include rents, healthcare, insurance, plane tickets, education, hotel bookings, movies, wireless subscriptions, etc. 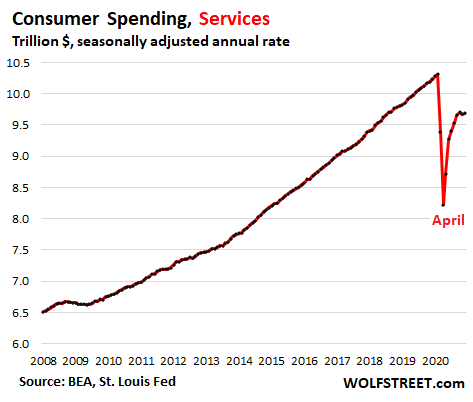 It looks like the Pandemic-driven purchases of goods, particularly durable goods – from equipping a home office to installing a hot tub on the deck – are backing off. And spending on services is still dismally low, given the many restrictions that impact services.

For some Americans, 2020 was great in financial terms. They made more money than ever, their investments and home values were inflated by the Fed’s $3 trillion QE, and they’re exuberant, and they bought goods they wouldn’t ever have bought otherwise, and they spent money on goods that they would have spent on services such as vacations at far-flung locations. But for many other Americans, 2020 was a horrible year, where everything fell apart.

GDP fell by 3.5% in the year 2020, the worst annual decline since 1946. Trade deficit in Q4 hit new all-time worst. Read… The Year of the Plague in Charts: Weirdest Economy Ever

319 comments for “Americans Cut Back as Income from Wages & Salaries Hit Record as 10 Million People Still out of Work: Weirdest Economy Ever”