And five SPVs expired, including the one that bought corporate bonds and bond ETFs.

The Fed has now put on ice five of its SPVs (Special Purpose Vehicles) which had been designed back in March to bail out the bond market. It unwound its repo positions last June. Its foreign central bank liquidity swaps are now down to near-nothing except with the Swiss National Bank, which seems to have a need for dollars. The Fed has been adding to its pile of Treasury securities at the rate spelled out in its FOMC statements, thereby monetizing part of the US government debt. And it has been adding to its pile of Mortgage Backed Securities (MBS).

The result is that total assets on its weekly balance sheet through Wednesday, at $7.4 trillion, are roughly flat with the level in mid-December and are up by $200 billion from early June, with an average growth rate over the six-plus months of $30 billion a month. 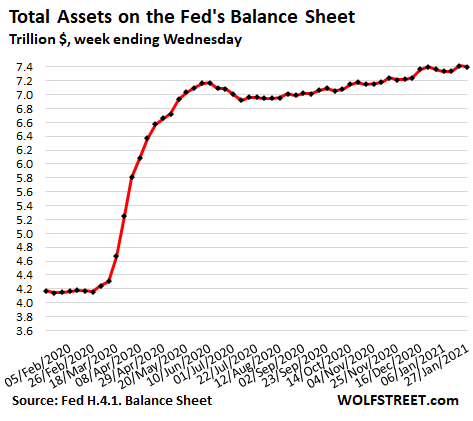 But the long-term chart shows just how hog-wild the Fed had gone, furiously trying to bail out and enrich the asset holders, which are concentrated at the very top, thereby creating in the shortest amount of time the largest wealth disparity the US has ever seen. From crisis to crisis, from bailout to bailout, and even when there is no crisis: 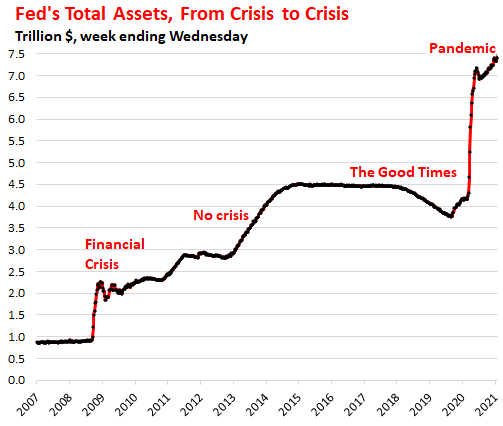 The Fed is still offering to buy repos but there have been essentially no takers after the Fed raised its offering interest rate above the market rate. Repurchase agreements are in-and-out transactions where the Fed buys Treasury securities or MBS from a counterparty with an agreement to reverse the transaction on a specific maturity date. The most common repos are “overnight repos” that mature the next day, when the Fed gets its money back, and the counter party gets its securities back: 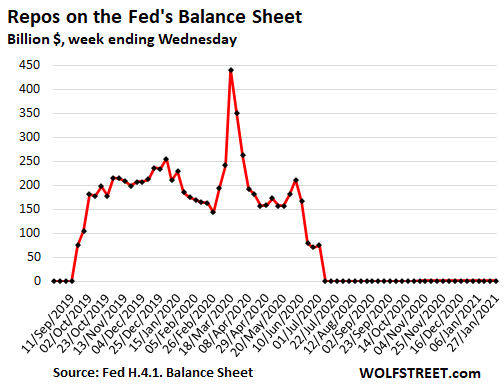 Central-bank liquidity-swaps nearly gone, except with the SNB.

The Swiss National Bank is the only central bank with which the Fed increased it swaps starting in October. By the end of December, they reached $10 billion. Currently, they’re at $6 billion, accounting for 63% of the total swaps, now down to just $9.6 billion, from $449 billion at the peak: 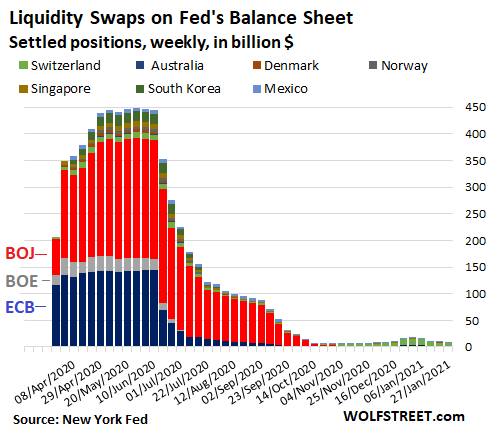 Most SPVs on ice, five expired on Dec 31.

These Special Purpose Vehicles (SPVs) are a way for the Fed to buy assets that it is not allowed to buy otherwise. They’re separate legal entities (LLCs) that the Fed created with the help and equity funding from the Treasury Department. The Fed lends to SPVs, and shows the sum of these loans and the equity funding from the Treasury on its balance sheet.

Five of the SPVs expired on December 31 – the PMCCF, CCF (the corporate bond and bond ETF buying program), MLF, MSLP, and TALF – as a result of then Treasury Secretary Mnuchin’s request on November 20 to end the programs and return the unused equity funds to the US Treasury, and Fed Chair Powell’s announcement that the Fed would do so.

This effectively shut down the corporate bond buying program. But the Fed had stopped buying corporate bond ETFs in July and by last fall was only buying a smattering of bonds anyway. The Fed still holds most of the bonds and ETFs it bought in 2020 but won’t add to them. The drop-off in the chart shows the return of the unused equity funding to the Treasury, with the total balance now down to $137 billion: 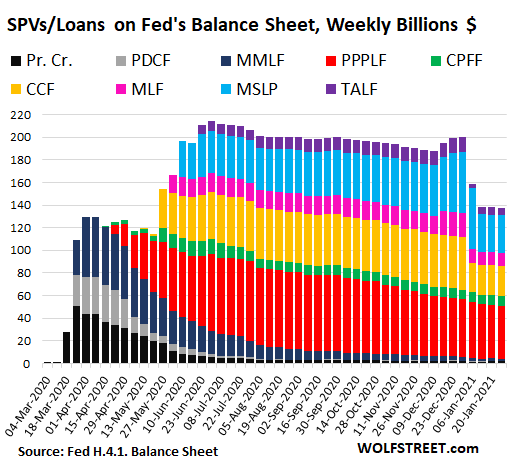 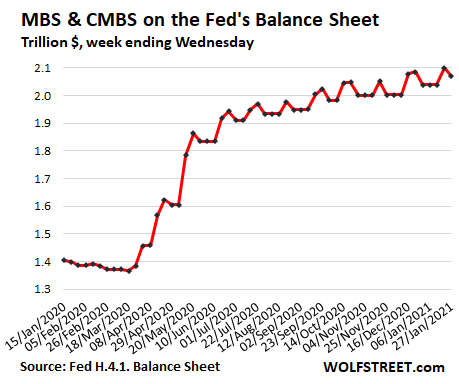 Since July, following the huge binge in March and April, the Fed has been adding on average $83 billion a month in Treasury securities, and its holdings have grown to $4.77 trillion through Wednesday. Of the $4.2 trillion in debt that the US government has added to its mountain of debt since early March, the Fed has monetized 54% or $2.3 trillion of it: 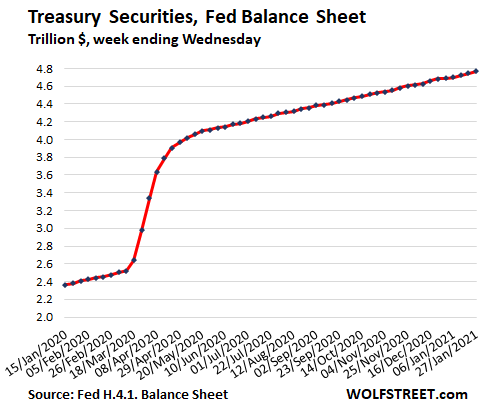 183 comments for “Update on Fed’s QE: The Crybabies on Wall Street, which Clamored for More, Are Disappointed”