What a show! Smallish traders, by ganging together on Reddit, succeeded fabulously in what famed big short-sellers have done for years in the opposite direction. And it’s pump & dump for both.

When I say that “the zoo has gone nuts,” I mean, “literally,” as in scientifically proven and peer-reviewed. But what an incredible show it is. Why exactly the zoo has gone nuts is still up for debate, but the Fed with its $3 trillion of printed money in three months has a prominent position in this discussion.

The shares of GameStop [GME], however, one of the most shorted stocks in the universe, performed a miracle: First, they wiped out the early short sellers in an astounding short squeeze engineered by traders ganging up on those short sellers on the social media; and then, the shares whipped around and wiped out those very traders that had gotten in late and had gotten caught in a classic pump-and-dump by those traders that had gotten in early.

And hedge funds are on both sides of the trade, and they too are reading — or machine reading — the trading mania in the social media and trade with it or against it, thereby accelerating the moves.

In the process, they all changed forever what famed short-sellers will have to face when they try to knock down a specific stock – usually one with a small float that’s easy to knock down – with their pronouncements and reports that are then eagerly multiplied by the financial media which create more downward momentum, off which short sellers expect to profit.

Back in July 2020, GME was trading at around $4 a share. This morning at around 10:45 AM, after several days of blistering ride, shares briefly hit $159, giving the company a market capitalization (share price times shares outstanding) of something like $11 billion. Alas, from that moment on, shares collapsed by 54%, interrupted by several trading halts, to $73.25 at the moment. This is what today looked like through about 3:16 p.m. (price data via YCharts). Note the trading halts: 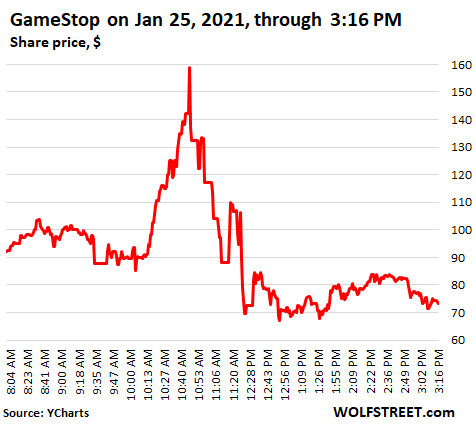 And this is what the five-year chart looks like, cut off at the peak today at around 10:45 AM, of $159, to mark a historic moment in time (price data via YCharts): 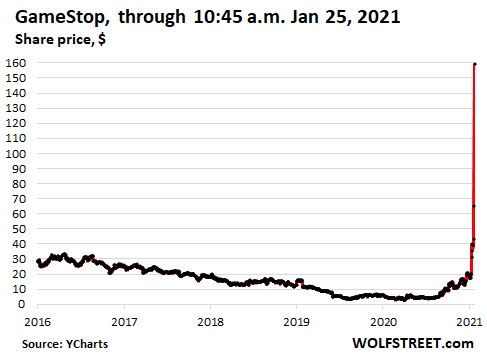 Revenues in the first three quarters of 2020 were down about 30% from a year ago – despite the boom in video games for the industry. Based on the performance of Q1-Q3, we can estimate that total sales for fiscal 2020, which goes through the end of January 2021, are on track to be around $4.6 billion, down 52% from 2016.

In January 2017, it had 7,535 stores. By October 2020, this was down to about 5,000 stores. Despite the efforts to close stores, shed employees, and cut expenses, the company is on track to generate a net loss for the third year in a row. 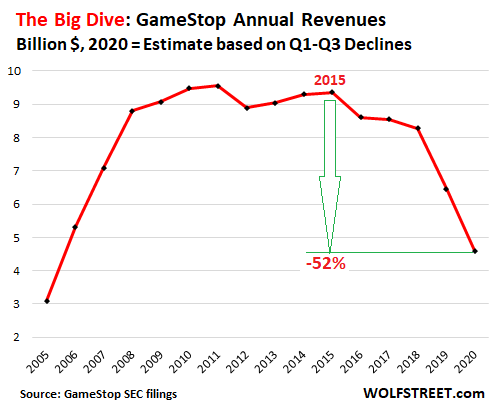 When shares surge despite plunging revenues and a doomed brick-and-mortar business model, the stock becomes an all too obvious fodder for short sellers, including Andrew Left of short-selling firm Citron Research. GameStop has become one of the most shorted stocks out there. To close out their positions, short sellers have to buy those shares.

And then folks on the social media, particularly on Reddit, started encouraging each other to buy the shares, drive up the share price, and generate a short squeeze that would send the shares skyrocketing while panicked short sellers would have to chase those shares higher to buy them back in order to cover their positions.

And this is what happened beautifully, amplified by hedge funds trading with this crowd. It’s not the first time this happened. Tesla shares, for example, have gone through this for years. But there is at least a fantastical story for Tesla: it’s not a niche automaker with a global market share of 0.7% but some kind of information company or whatever run by a CEO who walks on water. GameStop has no story other than being a brick-and-mortar retailer caught up in the brick-and-mortar meltdown that has been going on for years.

What is hilarious about this show is how these smallish traders that were ganging together on Reddit have succeeded in doing the same thing that a few big short-sellers have done successfully for years in the opposite direction.

Short sellers, after they take their short position in a target company, come out with devastating reports – some true, some not – about that company and announce their short position. The financial media then multiplies this gleefully across the globe, and the selling of the shares sets in, by other short sellers that want to tag along and by longs dumping their holdings. And shares plunge.

Some of those cases have been called “short and distort,” sometimes laced with dubious allegations of “fraud” that then never materialized.

In other cases, short sellers turned out to be the only sheriff on Wall Street, exposing the shenanigans that should have been exposed years earlier by our cutesy watchpuppies.

244 comments for “After Skyrocketing in Majestic Short Squeeze, GameStop Shares Collapse 54% in Hours: The Zoo Has Gone Nuts”