Another sign the zoo has gone nuts. “If you don’t have your own SPAC, you’re nobody.”

The business of SPACs is setting stunning records. A SPAC (special-purpose acquisition company) is a “blank-check company” with no business activity that raises funds from investors via an IPO and will then attempt to use those funds to buy a startup company. For the startup company, getting acquired by a SPAC is an alternative to an IPO. There are fewer disclosures to make, compared to a standard IPO. For Wall Street, there are huge fees to be made. And insiders, including those that start the SPACs, make tons of money. So all the building blocks are in place.

In 2020, an all-time record of $83 billion were raised by SPACs, six times as much as in 2019 ($13.6 billion), according to SPAC Insider’s data. This $83 billion was more than all of the funds that SPACs had raised in all prior years combined, according to Dealogic, and it blew by the $78 billion raised by standard IPOs in 2020, such as Airbnb’s IPO. Everyone and their dog was starting SPACs, from former Speaker of the House Paul Ryan to former NBA star Shaquille O’Neal, going after the hottest stories at the minute.

And in 2021, the SPAC mania accelerated further. “If you don’t have your own SPAC, you’re nobody,” Peter Atwater, founder of Financial Insyghts, told the Wall Street Journal. In the first three weeks of 2021, there have already been 67 SPACs, raising a total of $19 billion, more than in the entire year of 2019: 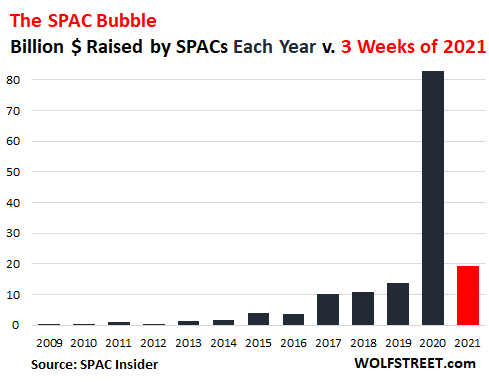 A special mix of market exuberance, blind confidence that this exuberance will last forever, and a total disdain for valuations are required to create this kind of situation.

To see just how far this mania in SPACs has exploded this year, we can look at the dollars raised per week on average. Turns out, in 2021, $6.4 billion have been raised per week, compared to $1.6 billion per week in 2020. This is where we are so far: 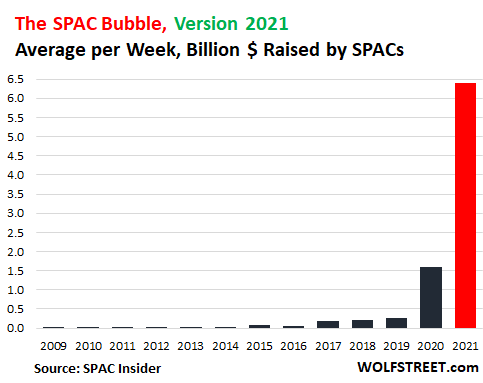 There are currently 287 SPACs, sitting on roughly $90 billion in cash, that are now trying to chase down startups in the hottest sectors of the moment, from anything-EVs to telehealth.

Stocks after they have gone public have skyrocketed since the March lows. The Renaissance IPO ETF [IPO], which tracks the Renaissance IPO Index, which includes the largest 80% of IPOs over the past two years, has soared by nearly 240% since March 18, totally blowing by and leaving in the dust the S&P 500 Index, which has soared 72% since the March low. This spike in the IPO index comes after it had spent the prior five years roughly on the same trajectory as the S&P 500 Index (data via YCharts): 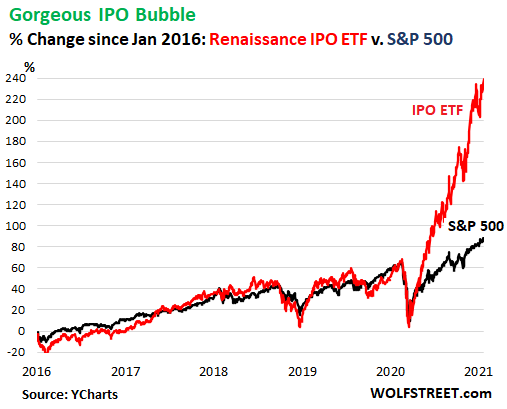 Fees from SPACs and IPOs are a goldmine for Wall Street Banks.

Banks have now reported their fourth quarter results, including the fees they earned from SPACs and IPOs. In 2020, the top six in equity underwriting fees – Goldman Sachs, Morgan Stanley, JPMorgan, Bank of America, Citigroup, and Jefferies – earned $14.1 billion in fees from SPACs and IPOs, according to the Wall Street Journal, up 89% from 2019: 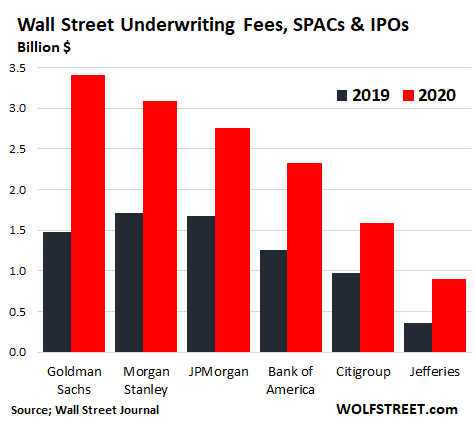 So everyone is getting rich off this mania in SPACs and IPOs and is having a grand old time. And after everyone has gotten rich off the mania, and extracted fees and unloaded shares and had all the fun, there is then another thing: In prior manias of this type, the aftermath has been very unkind to investors that had made it all possible by buying these shares with that mix of exuberance, blind confidence that this exuberance will last forever, and a total disdain for valuations. Ah yes, this time it’s different, everyone is saying again – another sign that the zoo has gone nuts.