There is still the theme that some of it is just temporary.

Big parts of the services sector – such as restaurants, entertainment, lodging, and travel – have been hit hard during this crisis. Other parts of the services industries – such as real estate, services related to ecommerce, transportation services, video games, streaming services, etc. – have boomed. And other segments in services have muddled through. Services account for nearly 70% of the economy. Despite the decline in overall demand for services, inflation pressures are heating up – both in terms of prices paid by service firms, and the prices they charge their customers, according to two measures for these price pressures in January.

Across the US service sector, “cost burdens soared once again, with the rate of input price inflation the fastest since the survey began in 2009, according to the IHS Markit U.S. Services PMI this morning. “And the rate of increase has now accelerated for three successive months,” it said.

“Firms largely passed on higher costs to clients through a marked rise in charges,” it said, meaning that the resistance to higher prices appears to have faded, and companies get away with raising prices without losing customers.

“Service providers recorded a steep increase in selling prices during January,” it said amid “strong client demand and a spike in input prices.”

“The rate of charge inflation was the second-quickest on record [its records going back to 2009], only slower than the peak seen in November 2020,” it said.

“Inflation therefore looks likely to be pushed higher in the near-term,” it said.

And yet, business for the services sector is not red hot.

Hiring has been slow: “Despite a faster rise in new business, a number of firms reported sufficient capacity to process incoming new work in January. As a result, companies increased workforce numbers only marginally, and at the slowest pace since July 2020.”

“The increase in outstanding business was the softest in the current seven-month sequence of expansion,” it said.

And there is still the theme that some of this inflation is just temporary, a result of the distortions during the Pandemic.

“Some of these price pressures reflect short-term supply constraints, which should ease in coming months as the recovery builds and more capacity comes online,” it said.

Also this morning, the Institute of Supply Management released its Services ISM Report On Business. It also reported surging input prices, though the pace of increase in January has slowed somewhat from the November surge, which had been the fastest in years.

The ISM’s index for prices at 64.2 was down 0.2 percentage points from December (seasonally adjusted), indicating that prices increased but at a slightly slower rate than in December.

A value above 50 indicates expansion. A value below 50 indicates contraction. The higher the value is above 50, the faster the expansion (data via YCharts): 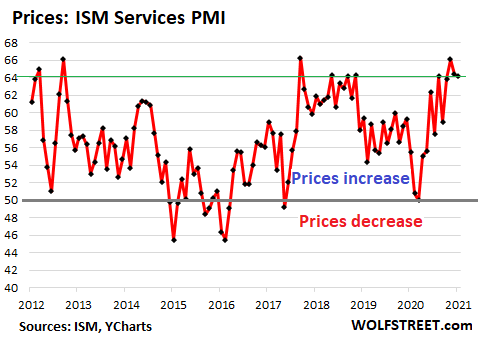 Of the 18 service industries in the ISM index, 16 reported price increases in January, compared to December, and two industries reported no change. The 16 industries that reported an increase in prices paid were in that order:

A step or two further down the road, at the consumer level: The Consumer Price Index picks up price changes well after companies are reporting them.

The CPI for services (red line in the chart below) has increased mostly between 2% and 3% year-over-year for the last decade and has dropped during the Pandemic, as demand for many services (hotels, flights, etc.) has collapsed.

Prices of nondurable goods (green line), which include food and energy, have gyrated wildly over the years, in response to volatile commodity prices.

And the CPI for durable goods (black line), whose year-over-year increases are almost always lower than services, and have been negative thanks in part due to rampant “hedonic quality adjustments,” has begun to spike amid a historic surge in demand: 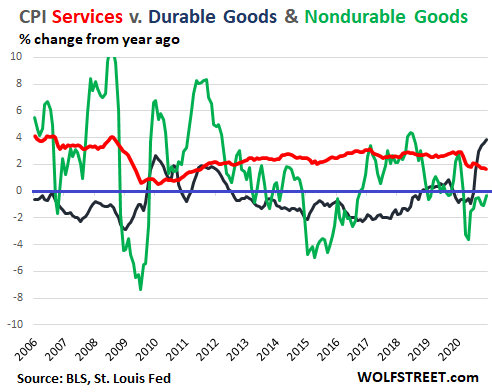 During the pandemic, the collapse of some services, including travel, has caused those prices to drop, but people’s budgets aren’t going to those services at the moment. The budgets have been redirected to purchases of goods – particularly durable goods whose prices have jumped.

The manufacturing PMIs two days ago revealed the sharpest price increases in years, input prices and selling prices, as the goods producing sector has experienced a sudden surge in demand amid shortages of components and commodities – including semiconductors – due to the sudden shifts in the economy.

What the services PMIs are telling us is that there are price pressures now building up even in services though the services sector overall is far from having recovered, and in many aspects of services, demand remains weak.

91 comments for “Inflation Pressures Heat Up Even in Services”