Actual rent collection data from over 11 million apartments and 80,000 single-family rental houses, compared to a year ago.

An estimate by the Mortgage Bankers Association yesterday, based on an internet survey of a few thousand renters, found that in December, 7.9% of them had missed or delayed a rent payment, or had made a reduced payment. From those surveys, it concluded that 2.62 million households across the US were behind in some form, and that landlords were owed “as much as $7.2 billion” in missed rent payments.

But there is data from landlords that shed light on how much worse it has gotten during the Pandemic, compared to the Good Times. 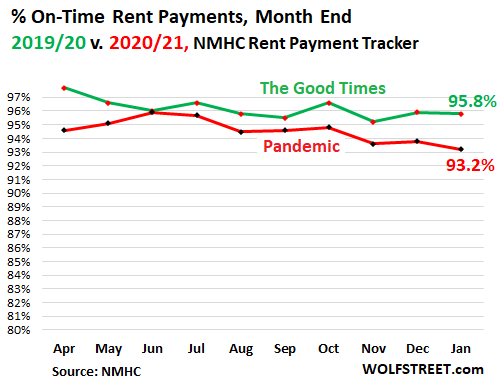 The year-over-year deterioration of 2.6 percentage points for January, amid the 11.1 million-plus renters, means that about 289,000 more renters have fallen behind compared to a year ago.

These apartments, represented by the NMHC, account for about 25% of the total 44 million renter households in the US, and for about 42% of all rental apartments.

The NMHC obtains this rent collection data from five property management software providers (Entrata, MRI Software, RealPage, ResMan, and Yardi), used by thousands of larger property managers (rather than mom-and-pop operations). These are market-rate apartments in multifamily buildings. They do not include subsidized affordable units, single-family houses for rent or condos for rent, privatized military housing units, or student housing.

Invitation Homes [INVH], with about 80,000 houses for rent, reported for Q3 (it hasn’t reported Q4 results yet) that revenue collections deteriorated by about 2 percentage points, from a “historical average” of 99% of monthly rent billings to 97%.

But Invitation Homes also reported rising rents in its markets, to where its net income, despite the deterioration in rent collections and bad debt, ticked down by only 3% year-over-year to $33 million.

Both, the NMHC data on apartment buildings and the Invitation Homes data on single-family rental houses, show a deterioration in rent collections in the range between 2% and 3% compared to the normal rent collection problems during the Good Times.

But neither covers subsidized and affordable apartments, and other low-end units, where many of the people live that have been hit hardest by layoffs in the services industries, including restaurants, retail, and personal care. More of these tenants might experience greater difficulties in making rental payments.

Note in the chart above that rent collections picked up in May, and in June caught up with June a year earlier, and remained relatively close to prior year for the rest of the summer, as the stimulus checks and extra unemployment benefits (which expired in July) were being used to pay rent.

A new stimulus package is being put together in Congress. Once that money flows into tenants’ bank accounts around the US, landlords will get a portion of it, as some of the renters that are now behind will use these fund to catch up with their rents, which is what many of them did last summer.

221 comments for “When the Eviction Bans End, How Many MORE Renters Face Eviction than in Good Times? How Much Worse is it Now?”