Then there’s the “single-asset” commercial mortgage-backed security (CMBS) backed only by the mortgage of this tower.

This is now happening in apartment towers in big densely populated cities around the US: Suddenly mind-boggling vacancy rates as a large number of tenants have left in recent months. And this is happening even at the best of them. And holders of the commercial mortgage-backed securities (CMBS) are waking up.

The iconic “New York by Gehry” 76-story tower on 8 Spruce Street in the Financial District of Manhattan, designed by architect Frank Gehry and built in 2011, with 899 apartments, plus an elementary school for 600 kids occupying the first five floors, had an occupancy rate of 98% in 2019. By September 2020, the occupancy rate had plunged to 74% – roughly 234 units of the 899 units were vacant! 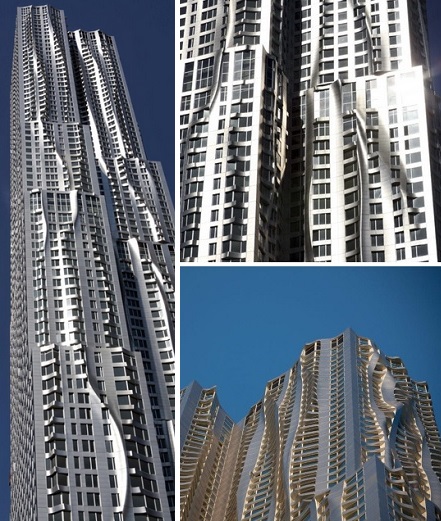 The photos of the tower with the wrinkled-appearing stainless-steel exterior are from New York by Gehry’s website, which itself lists only about two dozen apartments for rent, ranging from a studio at $2,160 a month to a three-bedroom on the 71st floor for $11,229 a month. No way that it would list all 234 units. That type of catastrophic info is essentially a secret.

The plunge in the occupancy rate caused the mortgage, which was securitized in 2014 into a single-asset commercial mortgage backed security (CMBS), to be put on the servicer watchlist in November, citing the plunging occupancy rate as one of the reasons, according to a note this morning by Trepp, which tracks CMBS.

When the $550-million mortgage was securitized in 2014, the building was “valued” at $1.1 billion. But when properties get in trouble – as mall and hotel properties have amply shown – those “valuations” at the time of securitization quickly turn into a hoax, and new appraisals cut valuations far below the original valuations and often below the loan amounts.

The 32-year $550-million loan matures in 2046 and is interest-only until the “anticipated repayment date” in 2024. It is the only mortgage in the CMBS, which was issued by the New York City Housing Development Corporation (NYCHDC 2014-8SPR) – meaning that this CMBS offers no diversification for investors; they’re exposed to the fate of one mortgage, collateralized by one iconic apartment tower with plunging occupancy.

The $550-million CMBS includes $346 million of taxable bonds (classes A, B, and C) and $204 million of tax-exempt bonds (classes D, E, and F), according to Fitch. As part of the deal to be able to issue tax-free mortgage bonds, all units are subject to the New York City Rent Stabilization Law.

On August 13, when Fitch reaffirmed its “AAAsf” rating – the highest on Fitch’s scale – of class A of the CMBS, the only tranche it rates, it ironically cited the occupancy rate as of March 31, which had dropped by then (from 98% in 2019) to 95.4%, meaning at the end of March roughly 41 apartments were vacant.

But in the six months through September, the occupancy rate plunged to 74%. With roughly 234 vacant apartments by September, in six months, the tower had lost a net of 193 tenants, or 21% of its tenants. That’s how fast this went.

Fitch also pointed at the additional risks associated with single-asset CMBS which are “more susceptible to single-event risk related to the market or sponsor.” This “single-event risk” is playing out now, namely the sudden plunge in occupancy. So maybe Fitch should give its AAAsf rating another look.

According to Trepp, the mortgage remains current and no Pandemic relief has been requested. When a mortgage is moved to the servicer watchlist, it is a sign that the servicer has concerns about the mortgage, such as the plunge in occupancy rates, and therefore the associated plunge in cash flow from the property, potentially affecting the landlord’s ability or willingness to make mortgage payments.

The landlord is Brookfield Properties. If push comes to shove, they know what to do. Commercial mortgages are non-recourse; lenders only get the collateral: At least 11 malls owned by Brookfield Properties are delinquent or are seeking debt relief on at least $2 billion in CMBS debt. The lenders ultimately carry the risk and may end up with the property.

Whatever happens to this mortgage and the single-asset CMBS backed by it, this example shows just how fast those apartment towers have been emptying out during the Pandemic, going from 95.4% occupancy at the end of March, when people were already bailing out of Manhattan, to 74% in September, suddenly leaving roughly 234 units vacant.

And these people that left apartment towers, along with the people that left similar condo towers where they’d rented or owned (or still own) a condo, have to go somewhere – and many of them ended up in single-family houses in the suburbs or further afield, thereby creating the mind-boggling land rush that started over the summer.

People are massively striking out on their own. But new businesses with planned wages have been getting scarcer since 2007. Read… This Spike of New Businesses is a Doozie, on Several Levels

130 comments for “Vacancy Rate at Iconic Manhattan Tower with 899 Apartments Hits 26%: This Shows How Fast & Massive the Exodus Has Been”