Mall meltdown gets messier. But someone’s making money. Here’s how they shorted malls.

An internal hedge fund of private-equity firm Apollo Global Management made over $100 million shorting the commercial mortgage-backed securities index CMBX 6 and other commercial property securities, according to the New York Times. Jason Mudrick, of hedge fund, Mudrick Capital, estimated that he had also made around $100 million in doing so.

The biggie was Carl Icahn. He disclosed on August 10 that his proprietary investment fund had made $1.3 billion in the first half of 2020, by purchasing credit default insurance using the CMBX 6 index, according to Bloomberg.

Icahn took out the bet in 2019, based on the ongoing Brick-and-Mortar Meltdown. But as the Pandemic hit, and retailer defaults went into overdrive, he hit paydirt big time. Though Icahn did not disclose the size of his bet, he’d told Bloomberg in April, “We have billions and billions on the short side of this.”

The CMBX 6 index is part of a group of 13 CMBX indices, all tracking commercial mortgage-backed securities (CMBS). The CMBX 6 tracks CMBS that were issued in 2012, of which 39.9% are backed by mall loans, according to Trepp, the highest exposure to retail property loans of any of the CMBX indices. And so it has become a popular vehicle for shorting malls.

An unexpected benefit for mall shorts is that over 10% of the CMBX 6 index are hotel CMBS, and hotel CMBS got brutalized even more than retail CMBS.

The CMBX 6 is sliced into tranches by credit rating of the mortgages, including BBB-, one notch above junk.

Pyramid Management Group, the owner of 1.3-million-square-foot super-regional Crossgates Mall in Albany, NY, is over 90 days delinquent on a loan of $261 million backed by the mall. According to Trepp, the loan is spread across three CMBS deals, all of which are in the CMBX 6 index, making them one of the largest components in the CMBX 6.

Last week, Crossgates Mall sued six of its surviving retailers – four of them owned by Gap Inc. (Banana Republic, Old Navy, The Gap, and Athleta) and two of them owned by Genesco (shoe retailers Journeys and Journeys Kidz) – for a combined total of $825,000 in past-due lease payments through August.

The value of Crossgates Mall – the collateral for the loan – was slashed by 40%, from $470 million, established in 2012 when the CMBS were issued, to $281 million now. Pyramid was granted six months payment deferral on the loan, according to recent special servicer comments cited by Trepp.

That’s how messy the mall meltdown is getting.

As of July, 16% of the retail property loans packaged into commercial mortgage-backed securities (CMBS) were delinquent. This was down from 18% in June, partly “due to forbearances and other relief assistance,” according to Trepp, which is when loans are marked “current” and are no longer counted as “delinquent,” though borrowers have stopped making payments: 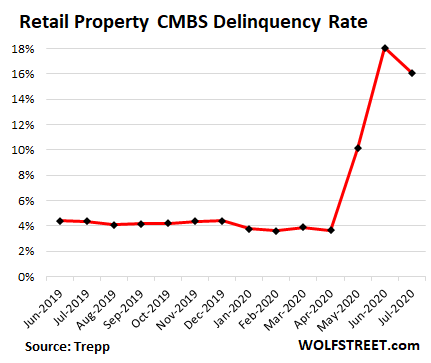 Below are the metros with the highest balances of delinquent retail CMBS loans, according to data from Trepp, in order of the dollar-balance of delinquent loans, with Houston claiming the top spot, with $2 billion in delinquent CMBS loans. Among these metros, the delinquency rate tops out at 28.4% in the Dallas-Fort Worth metro, followed by 20.8% in the Las Vegas metro:

This is now happening all the time, and even the biggest landlords are walking away from mall properties.

Simon Property Group [SPG], the largest mall landlord in America, which owns the Springfield Plaza – an aging 426,761-square-foot shopping center in Springfield, MA – wants to walk away from the $28.3 million mortgage and turn the mall over to lenders, according to special servicer notes reported by Trepp. The mortgage is in a CMBS that is part of the CMBX 7 index.

The mall was valued at $39 million in 2013 when the CMBS were issued. Now the value has dropped so far that Simon Property Group wants to walk away from a $28.3 million mortgage to get rid of the property.

Simon Property Group has walked away from a number of malls already, including last year as part of the regular Brick-and-Mortar Meltdown, when it turned the 1-million square foot Independence Center in a suburb of Kansas City, MO, over to lenders: The $200-million CMBS generated a loss of $149.7 million for CMBS investors (75% loss) when the mall was sold in a foreclosure sale, which, according to Trepp at the time was “the largest loss ever incurred by a retail CMBS loan.”

At least 11 malls owned by Brookfield Property Partners are delinquent or are seeking debt relief on at least $2 billion in CMBS debt, according to Bloomberg.

Starwood Capital Group is delinquent on 17 of its 30 retail properties with nearly $2 billion of CMBS, according to Bloomberg. An appraisal slashed the value of a group of four of those malls by 66% in one fell swoop, wiping out Starwood’s equity, which makes the properties a prime candidate for jingle mail.

158 comments for “Jingle Mail for Malls: Even Biggest Landlords Walk from Malls as Stores Go Bankrupt, Refuse to Pay Rent, Mall Values Slashed Brutally. But those Shorting Mall CMBS Made a Killing”