Ecommerce retail sales jumped 44% in the second quarter 2020, compared to a year earlier,  to $201 billion, not seasonally adjusted, according to the Commerce Department today. On a seasonally adjusted basis, ecommerce sales hit $211 billion. In dollar terms, the jump of $62 billion compared to Q2 last year was the largest ever in the data going back to 2001. 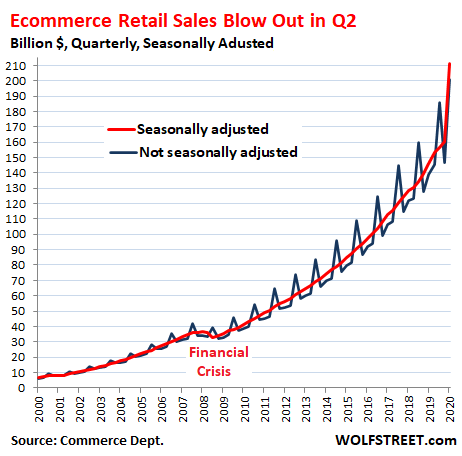 Walmart this morning added to the flood of data about the boom when it reported that ecommerce sales at Walmart US had jumped by 97% in Q2 compared to the same quarter last year. Walmart rolls its ecommerce sales into “comparable sales,” which jumped by 9.3%. Of that increase, about 6 percentage points were due to ecommerce sales.

And consumers had switched tactics: The number of transactions in comparable sales fell by 14%, but the average ticket (the dollar amount of the purchase) jumped by 27%, as people bought less often, but spent more when they did buy. 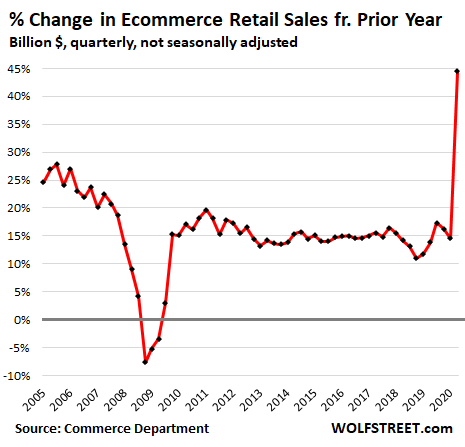 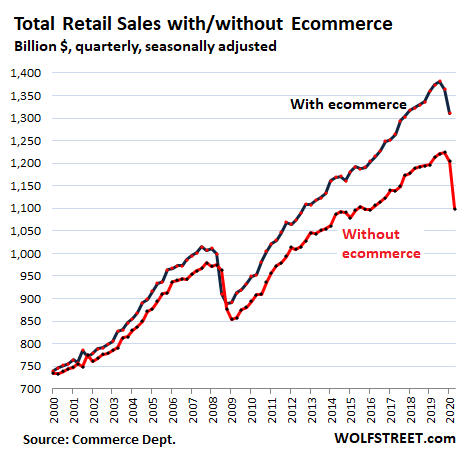 Sales are counted as ecommerce if the transaction takes place online, no matter how the merchandise gets into the house, whether through delivery or some form of self-pick-up at the store, or at a locker, or at locations such as Walgreens, UPS Stores, or the cleaners in the neighborhood that partner with a shipping company.

Best Buy was among the long list of retailers that reported blow-out ecommerce sales, which skyrocketed by 255% year-over-year in Q2 through July 18; and after it had reopened its stores, from the period between June 15 through July 18, when customers could shop at its brick-and-mortar stores, its ecommerce sales were still up 185% year-over-year.

Albertsons Companies, which owns Albertsons, Safeway, and a number of other supermarket chains, reported that in Q2 through June 20, online sales soared by 276% “as more customers shifted to online home delivery and Drive Up & Go.”

This interest by American consumers to buy groceries online is new. Americans have long been mega-resistant to buying groceries online. Safeway made a big deal out of its online store back during the dotcom bubble. This has been tried. Amazon made a huge effort to elbow into the online grocery business and ended up buying Whole Foods Market, not because it gave up on online grocery sales, but because it needed a different angle. Google in conjunction with Costco tried. And many others tried.

Some progress was made, but it was a slog. By Q4, 2019, online sales of food and beverages had risen to $3.3 billion, according to the new “experimental” data by the Census Bureau. And in Q1 2020, it ticked up to $3.5 billion. But that’s still only around 3% of total food and beverage sales. 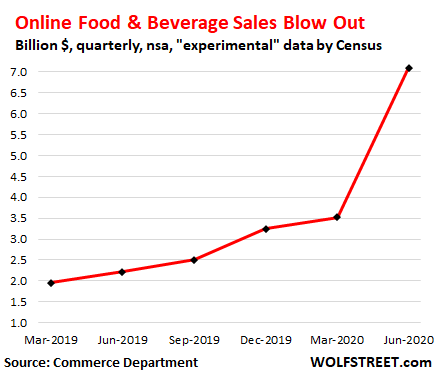 Online sales of building materials, garden equipment and supplies – the kind of things sold by Home Depot, hardware stores, and others – have skyrocketed. This was one of those things, like groceries, that Americans had been very resistant to buying online. Then came the Pandemic, and in Q2 sales doubled year-over-year to $8.2 billion, according to the “experimental” data by the Census Bureau: 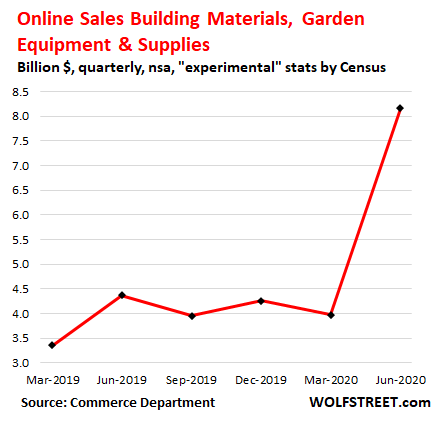 Online sales of furniture and home furnishings – Wayfair has specialized in this – jumped 62% in Q2 year-over-year: 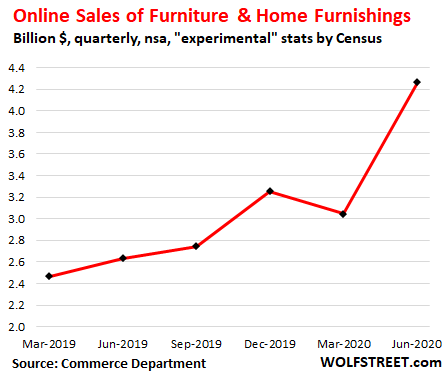 Retail spending was supported by stimulus money and extra unemployment benefits, and by money not spent on debt payments because many loans – mortgages, credit cards, student loans, and auto loans – had entered into deferral programs; and eviction bans allowed renters to skip rent payments and spend this money on something else. Read... Fired up by Stimulus Money & Debt Deferrals, Americans Went Shopping. But Where? How Life Changed During the Pandemic