Retail sales by category of retailer show how Americans have adjusted to the Pandemic and to a very peculiar financial situation. Spending was supported by stimulus money that included the extra $600 a week in federal unemployment benefits. A study by the Becker Friedman Institute for Economics at the University of Chicago found that two-thirds of the people who received  unemployment insurance made more from UI than from working, with about 20% of them doubling their pay.

This scenario of cash coming into the house is further supported by cash not flowing out the house to make debt or rent payments. Millions of people have entered into debt-payment deferral or forbearance programs and skipped making payments on their mortgages, credit cards, auto loans, and student loans. Others, protected temporarily by eviction bans, skipped making rent payments. This money not-spent on debt and rent was then spent elsewhere.

Retail sales show how this panned out – and there are large differences by category, reflecting big shifts in how and on what Americans spent their money. According to Census Bureau data this morning, total retail sales in July ticked up by 1.2% from June, to $536 billion (seasonally adjusted) after some big bounces in May and June, from the collapse in March and April. Compared to July last year, total retail sales were up 2.7%: 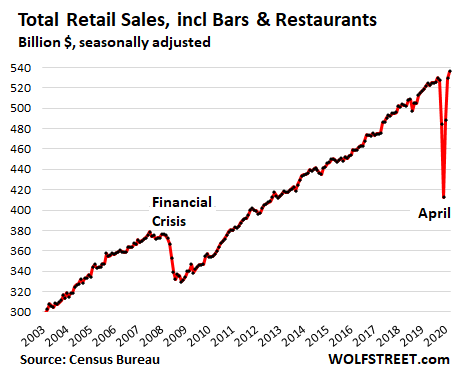 Sales at “Non-Store Retailers” – mostly ecommerce sales – spiked during the lockdowns and then remained about level over the past two months. In July, they were up 25% compared to July last year. At $84 billion, they now account for 17.4% of retail sales (without restaurants and bars).

This category overlaps with much of ecommerce but also includes other non-store retailers such as mail-order operations, door-to-door sales, and sales at stalls and vending machines, which have gotten crushed. Proper ecommerce sales for Q2 will be released in a few days. 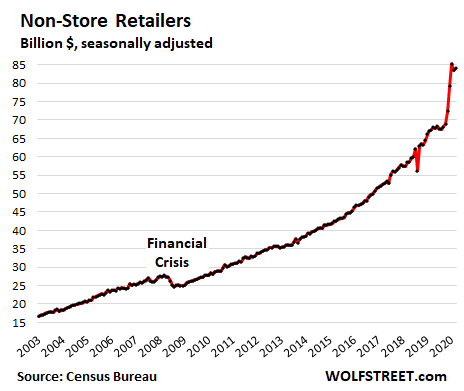 Sales at Food and Beverage Stores unwound part of the 18% spike in March during the beginning of the lockdowns when everyone rushed to the grocery store to load up – triggering the national “empty shelves era” that many people will never forget. But in April, sales fell back and have remained stable since then, but still 11% above the Old Normal last year. The recent months reflect a dramatic shift from eating out and eating at work and school, to eating at home: 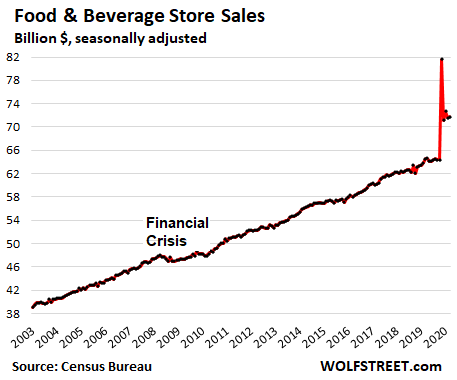 Sales at sporting goods, hobby, book and music stores went wild. They’d already been dragging for the past three-plus years, then came the Pandemic, and the bottom fell out in March and April. But then people figured out that it would be nice to have a bicycle to ride for exercise or transportation, and bike shops anecdotally reported booming sales and customers reported depleted choices and long wait times.

Others, stuck at home, decided to pick up their long-lost passion for playing an instrument in between Zoom calls with their boss. Camping suddenly became a hot vacation option, and sales of camping gear took off. Stories like these were everywhere.

And it shows up in the numbers. In June, sales at these stores hit an all-time high. In July, sales ticked down some but were still up nearly 18% from a year ago. But in the overall retail-scheme of things, the dollar amounts are small: less than $8 billion: 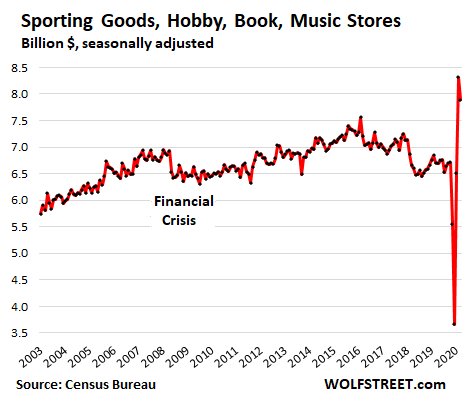 Sales at building materials, garden supply and equipment stores (including neighborhood hardware stores and big-box stores like Home Depot) had spiked 13% in May from April, ticked up further in June, but fell off some in July.

There have been innumerable stories from friends, our commenters, and in the media about homeowners sprucing up their homes, patios, and backyards, now that they’re going to hang out there and relish their staycations, with long wait-times reported for things like Jacuzzis. This is where part of the money went that people didn’t spend with airlines and hotels. Compared to July last year, sales were up nearly 15%: 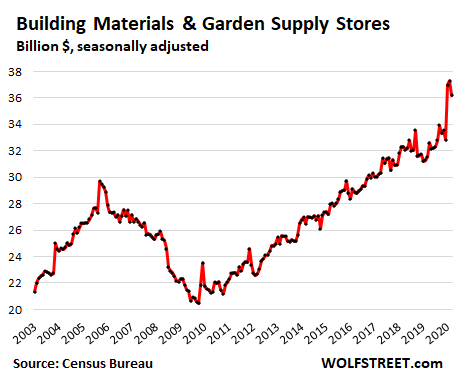 Sales at general merchandise stores without department stores had spiked by 14% in March but since then given up nearly all of that spike. In July, sales ticked down further, but at $50.7 billion were still up 4.4% from a year ago. Walmart and Costco are in this category: 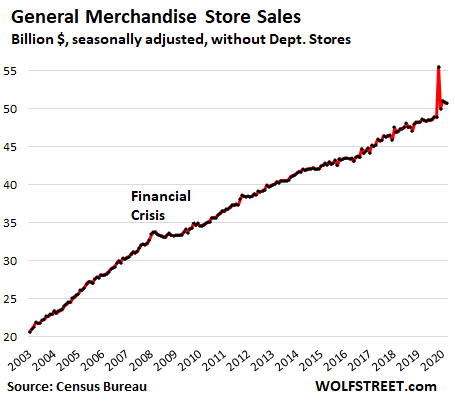 Sales at new & used auto dealers and parts stores bounced off sharply and in July were up by 6% from July last year. At $109 billion, this is the largest retail category, accounting for nearly one-quarter of retail sales (without restaurants and bars).

One reason for this discrepancy could be – and I mean could be because I’m just grasping at straws here – that the mix has changed, skewing upscale, as those folks with high incomes and working from home and benefiting from the blistering run-up in their stock portfolios splurged on more expensive vehicles, thus pumping up dollars sales, while unit sales still fell. We have seen some evidence of that in strong sales of high-end pickups and SUVs even in April: 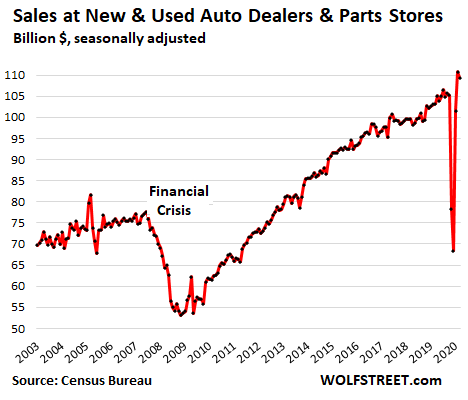 Sales at furniture and home furnishing stores had totally collapsed in March and April but bounced back in May and June, and in July was essentially unchanged from June, at $9.8 billion. This left sales down 0.7% from July last year. So we can call this a complete recovery.

But from the store-owner’s point of view, you see three months of totally crushed sales, and then sales get kind of back to normal, but you’re still out those lost sales during those three months, and unless you run way ahead on a year-over-year basis for the rest of the year, your sales for the year will be down by the amount lost during those three months. What they need is a strong overshoot to end up the year where they were last year. And that’s not happening: 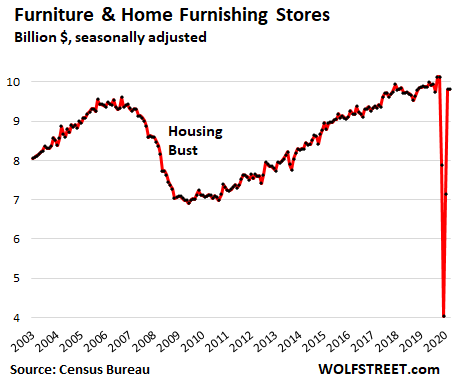 Sales at department stores – not counting the online sales of department stores – had been declining relentlessly for the past 20 years, and the Pandemic accelerated that process, and pushed a growing list of department stores into bankruptcy, and some into liquidation. Announcement of store closings, even after they were reopened, have been everywhere. This is a way of shopping that has been abandoned by Americans.

From the peak in 2001 through February 2020, sales declined from $20 billion a month to $11 billion a month, despite 20 years of inflation and population growth. Then came the lockdowns. There has been some recovery, but sales in July, at just $9.9 billion, were still down 13% year-over-year.

Back in 2003, sales at department stores accounted for about 7% of retail sales (without restaurants and bars). In July, they accounted for 2%! Landlords who still think that this will somehow turn around over the next few years are engaging in wishful thinking: 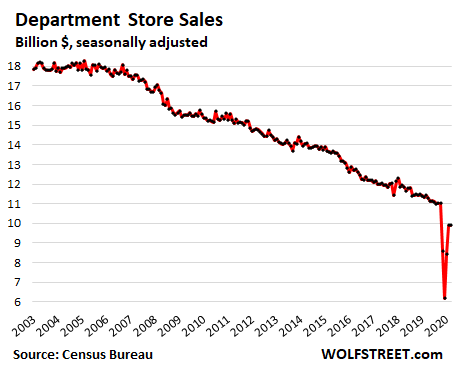 Sales at Restaurants & Bars bounced off sharply from the catastrophic low of April, as many restaurants have reopened, even if it’s only with outdoor seating. Sales in July, at $52.5 billion, are down 19% year-over-year: 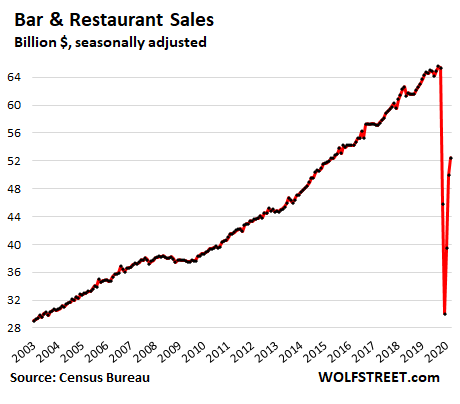 Sales at clothing and accessory stores had already stagnated for years. When the Pandemic hit, sales collapsed by 86% to just $3 billion in April, then bounced off. But in July, at $17.7 billion, sales remain 21% below a year ago, and right back where they’d first been in July 2006. People buy lots of clothes and accessories, but they discovered how to buy them online: 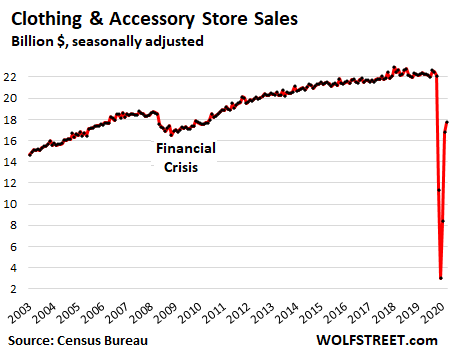 Sales at gas stations, which includes the junk food, beer, motor oil, and other stuff people buy at gas stations, bounced off the April low, driven in part by the bounce in gasoline prices. But at $35.6 billion, sales were still 16% below July last year: 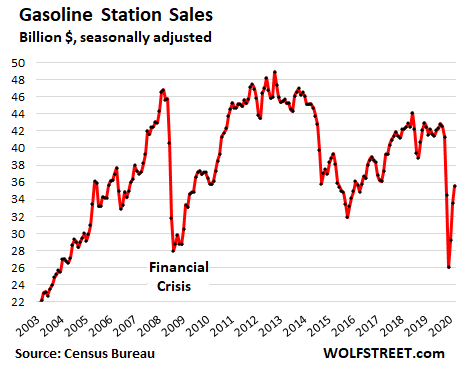 196 comments for “Fired up by Stimulus Money & Debt Deferrals, Americans Went Shopping. But Where? How Life Changed During the Pandemic”