Total assets on the Fed’s balance sheet for the week ended August 12, released this afternoon, ticked up by $12 billion, to $6.96 trillion after two weeks in a row of declines, and are down by $212 billion since peak-QE on June 10. 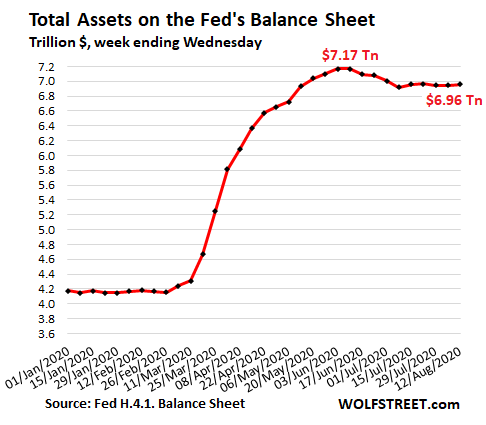 SPVs fell by $1 billion, 6th week in a row of declines.

The Fed conducts many of its QE operations via Special Purpose Vehicles (SPVs). These are LLCs that the Fed created and that it lends to, and that then use these funds, along with the equity capital provided by the Treasury Department, to buy assets and lend. This is the current alphabet soup of SPVs on the Fed’s balance sheet:

The SPVs’ combined balance ticked down by $1 billion from the prior week, to $200 billion, the lowest since June 17. The largest SPV currently is the PPP loan facility (red), with which the Fed buys PPP loans from banks. Note that the early SPVs are being phased out, and replaced by newer ones: 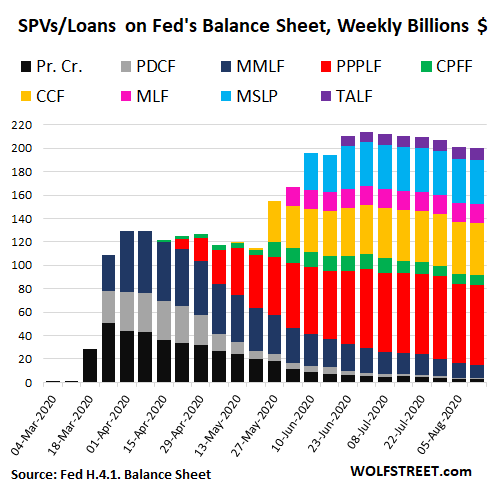 The SPV “CCF” (yellow) is where the Fed holds its ballyhooed corporate bonds and bond-ETFs that it purchased. The current balance of the CCF is $44 billion. The Fed disclosed a few days ago what exactly is in it as of the end of July, including names of companies and ETFs and amounts.

Repurchase Agreements (Repos) at zero, sixth week in a row. 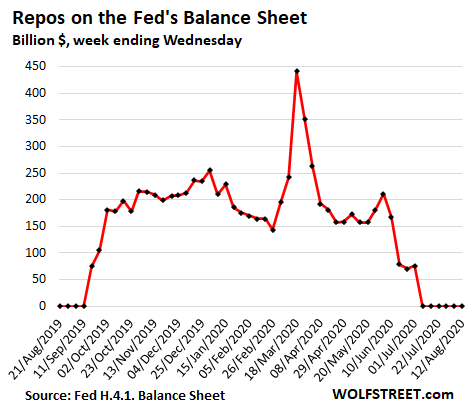 The Fed’s “dollar liquidity swap lines,” designed to provide dollars to certain other central banks, are being phased out and have now dropped below $100 billion ($99.78 billion). The Bank of Japan is the big exception, accounting for $80 billion, or 80% of the total. Swaps with the ECB are down to $9 billion, with Mexico down to $5 billion, with Switzerland down to $3 billion, and with Singapore down to $2 billion. Swaps with the rest of the central banks have matured and are gone: 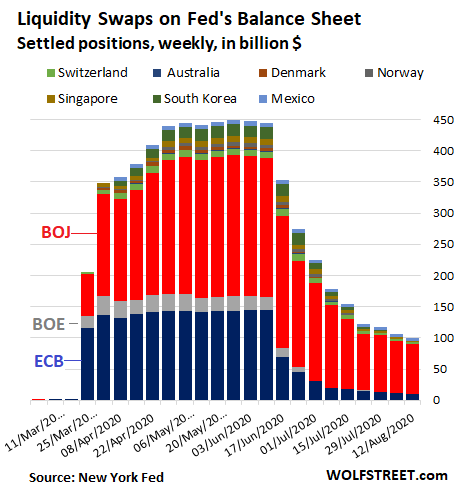 The balance of mortgage-backed securities remained unchanged at $1.93 trillion. These balances are erratic due to the pass-through principal payments, which are triggered when mortgages are paid off, such as during the current refinance boom; and due to the long settlement times of 1-3 months for these trades, and the Fed only books the trades after they settle: 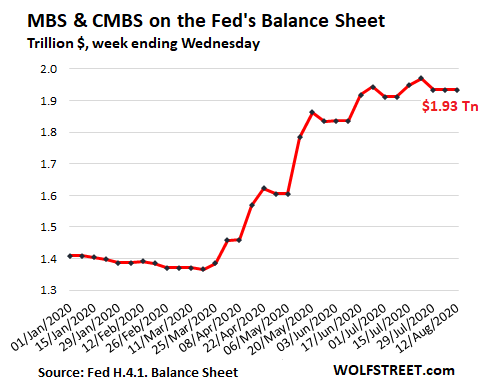 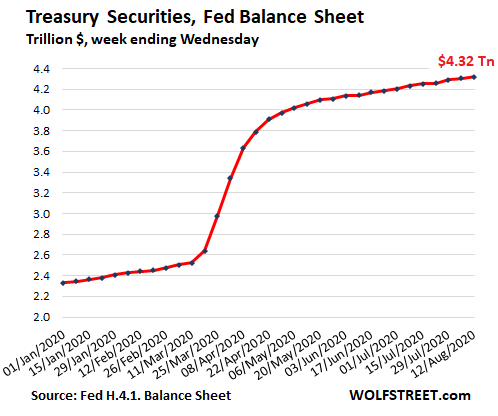 Here are the details of the Fed’s purchases and holdings of corporate bonds and bond ETF, including names of ETFs and amounts. Read…  Corporate Bond & Junk Bond Markets Driven into Foaming-at-the-Mouth Exuberance by Fed Jawboning about Huge Purchases. But it Actually Bought Just Tiny Amounts

86 comments for “Week 9 Since Peak-QE: Update on the Fed’s Assets”