But a surge in new renters pronto is unlikely.

Canadian real estate markets are about to see an explosion in rental inventory if Toronto is a sign. Toronto Regional Real Estate Board (TRREB) data prepared by real estate agent Daniel Foch shows an explosion of new listings for rental units in July. The number of new listings has reached a multi-year high, with a lot of reasons to believe there’s going to be more units hitting the market soon.

Toronto Saw New Units For Rent Rise Over 82% In July.

The City is seeing rental inventory rise very rapidly, something that hasn’t happened in a very long time. There were 8,346 new listings for rentals in July, up 82.1% (!) from the same month last year. The number of new listings for rentals hasn’t been this high since at least 2016, when condo apartment prices began their rapid ascent. Even though the data only goes back to 2016, this trend likely goes back at least a few more years. 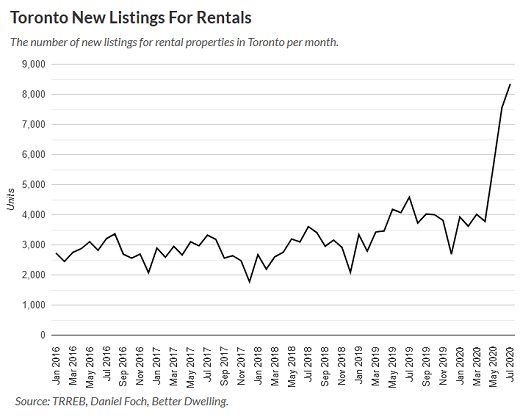 The number of renters signing leases has been rising too, just not nearly as fast as new rental listings. There were 4,415 leases signed in July, up 11.5% from the same month last year. This is also the highest number since 2015, but fails to keep up with the increase in new rental listings. The annual number of leases signed usually peaks in July. 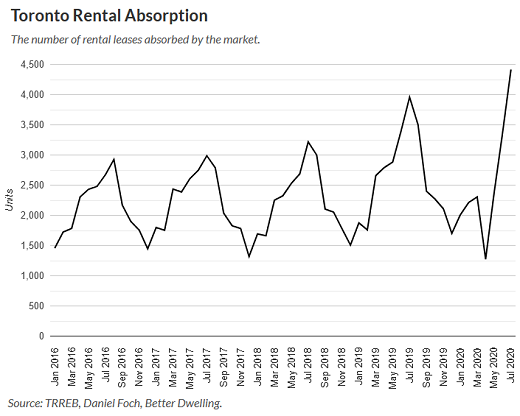 Toronto Just Saw The Worst July For Rental Absorption In Half A Decade.

Fewer or more listings and leases aren’t important as a data point by itself, so you should always look at the ratio. The new lease to leased ratio is just 52.9% in July, which is an improvement compared to the past 3 months. However, the down trend that began in August of last year is still intact. This is the first July going back to at least 2016, where the ratio isn’t higher than 80%. 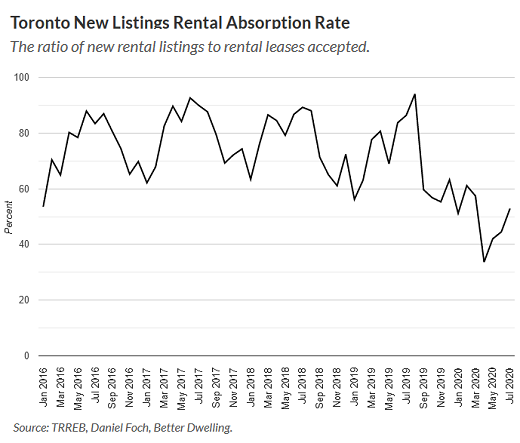 There’s a lot of reasons to see a supply-side expansion, a.k.a. more rental listings hitting the market. Students that have been paying rent and living overseas are unlikely to renew their digs into the school year. Airbnb demand is expected to soften, with the CEO acknowledging demand will never be the same. Then there’s unpaid rent, about 6,000 units officially, that are expected to see evictions soon. Ontario’s new Bill 184 will expedite these evictions, so it won’t be before we see those units also hit the market.

A Surge In New Renters Soon Is Unlikely.

There’s not a lot of reasons to expect demand-side expansion, a.k.a. an explosion of renters to hit the market. Immigration is largely on hold, with fewer international students arriving and staying. The credit impact to thousands of people for non-payment will also limit the amount of competition for units. Landlords probably aren’t going to be keen to rent to people that couldn’t pay their rent just a few months ago. By Stephen Punwasi, Better Dwelling