During the week, 1.32 million newly-out-of-work people filed for state or federal unemployment insurance. A huge number of job losses. But more people returned to work.

The number of people who continued to claim unemployment insurance under all state and federal unemployment programs, after having risen in the prior week, fell by 3.07 million to 28.26 million (not seasonally adjusted), the first reading below 30 million since June, as both, continued claims under state programs and continued claims under the federal programs provided by the CARES Act declined, according to data released by the Department of Labor this morning. This was the lowest – least catastrophic – reading since June 13: 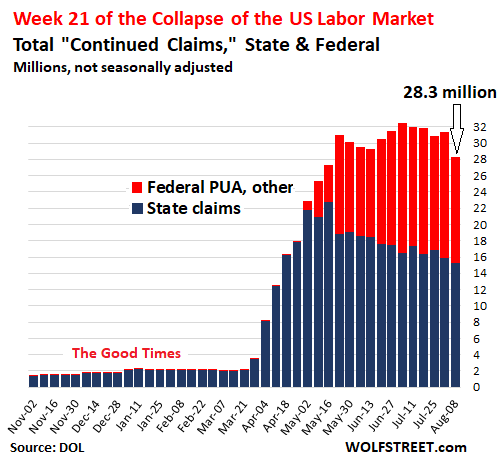 A still enormous number of people – 15.2 million – continued claiming unemployment insurance under regular state programs, “not seasonally adjusted,” but this was down by about 625,000 from the prior week and continued the fairly consistent downtrend that had started in May.

This is where the big move took place. The number of people who continued claiming unemployment insurance under all federal and other programs – after having jumped by 1.5 million in the prior week – fell by 2.44 million to 13.05 million, the lowest since June 20. The decline was driven by a massive plunge in continued claims under the Pandemic Unemployment Assistance (PUA) program that covers gig workers.

PEUC: But the number of people claiming continued benefits under the federal Pandemic Emergency Unemployment Compensation (PEUC) rose by 67,000 to 1.22 million.

STC / Workshare: ticked up to 451,485 continued claims. These state programs “allow an individual who is employed for a portion of the week to collect UC. Under STC, an employer elects to avoid layoffs by reducing the number of regularly scheduled hours of work for all, or a group of, individuals during disruptions to a firm’s regular business activity….” STC “provides individuals a pro-rata share of weekly benefits based on the reduction in weekly hours of work.” 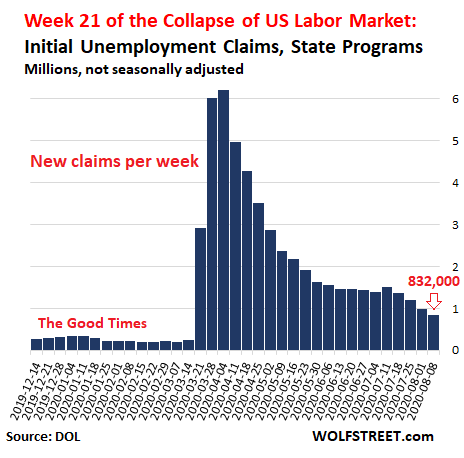 Initial claims under the federal PUA program for contract workers fell to 488,622 (not seasonally adjusted), from 655,999 in the prior week.

What it boils down to.

People can only claim unemployment insurance under a state program or under a federal program, but not under both. The claims are processed by the same state unemployment office, and this makes double-dipping less likely.

But data chaos persists. Reports are everywhere of under-reporting and over-reporting, of fraudulent claims and of claims that have been hung up for weeks or even months and still haven’t been processed for one reason or another. There are reports of still understaffed unemployment offices that cannot handle the inflow, especially with the limitations of working in an office environment during the Pandemic, with many workers having been switched to working from home, which entailed a whole set of new problems, including technical issues.