Vroom, whose shares plunged nearly 20% afterhours today, belongs to a new breed of used-vehicle dealers that sell cars online. On the first day of trading after its IPO two months ago, amid a crazy surging stock market, its shares “popped” 117%. From the IPO price of $22, shares then soared to a closing high today of $69.01, before the afterhours plunge to $55.56 a share.

Buying a used car online and having it delivered is still not common in the US. About 0.9% of total used vehicle sales occur online, according to Vroom’s Prospectus filed before its IPO. So change is afoot. But good lordy. This is how much Vroom has been losing, selling used cars:

You see where this is going: the more it sells, the more it loses, and this in the used-car business.

In its report today, Vroom said – and this is interesting:

“In response to the drop in demand and uncertainty around vehicle pricing early in the pandemic, we chose to de-risk the business by significantly reducing our inventory during the first half of the quarter.”

OK, Vroom is into ecommerce and wasn’t impacted by the lockdown in March and April, but people stopped buying used cars, and Vroom, along with the entire industry, stopped replenishing their inventories and stopped going to the auctions and stopped buying more used cars. And they sold what they had to trim down their inventory, and they made deals to get rid of these cars.

But then the stimulus checks hailed down on consumers and made great down-payments for auto loans, and suddenly people were buying used cars again. And so Vroom went on:

“As demand increased and pricing became more stable through the second half of the quarter, we pivoted to start rebuilding inventory and continue to do so.”

Vroom went out there buying used cars so that it would have something it could sell. And this happened nationwide. But it was too late:

“These lower inventory levels prevented us from fulfilling all of the demand that materialized in the second half of the quarter.”

Before the Pandemic, between 109,000 and 116,000 used vehicles, up to eight years old, were sold every week at auctions around the country, according to J.D. Power. But sudden, in mid-March, volume collapsed, and by the week through April 5 was down 84%, to just 18,000 units, as the market had frozen up, with dealers not buying and sellers not sending their vehicles to the auction, and auctions shutting down because of safety concerns.

Then auctions transitioned to electronic venues and figured out social distancing. Dealers showed up again, and sellers showed up again, and volume soared to pre-Pandemic levels. This chart of weekly auction volume from J.D. Power shows this chaos, the 84% plunge, the bounce-back, and the tapering off again as dealers largely finished replenishing their inventories: 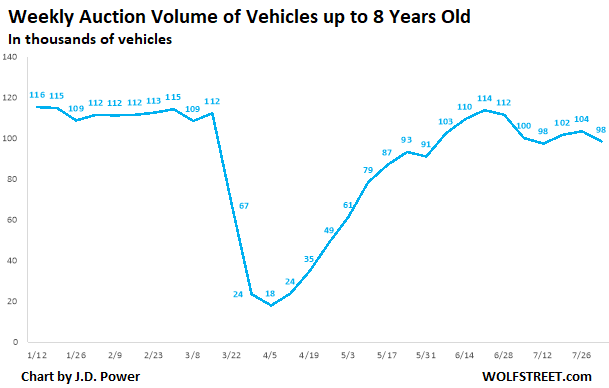 Surging wholesale prices mean higher costs for dealers, which squeezes their profit margins when they retail the units. But that impacts all dealers, not just Vroom.

There was a demand shock, as people stopped buying cars. Dealers shed inventories to deal with the demand shock and stopped buying at auction. Sellers stopped selling at auction. And auctions shut down. This created a supply shock on retail lots. And suddenly dealers realized that demand was coming back, and that they’d run out of cars, and they all ran back to the auction at the same time, and prices – their costs – soared. This is what used-car dealers were up against.

But Vroom, being a tech company or something and not a used-car dealer, got totally mauled by cutting prices. In Q2, Vroom, on its ecommerce platform:

But there is more…

Back in 2015, Vroom acquired a used-car dealer with a brick-and-mortar presence in the Houston area, Texas Direct Auto (TDA). In Q2, TDA:

In addition, Vroom’s wholesale gross profit per unit swung from $83 per unit in Q2 last year to a loss of $167 per unit in Q2 this year, which makes for a 301% decline.

So for all units combined – ecommerce, TDA, and wholesales – total gross profit per unit dropped 40% to $686.

And here’s how the pros did.

CarMax, the largest used-vehicle dealer in the US, has been through a few crises, and also got hit by everything that hit Vroom.

For its quarter ended May 31, the three months in the thick of the crisis, CarMax reported a 39% plunge in total revenues, being a brick-and-mortar operation with many of its stores impacted by lockdowns and a refusal by people to show up in person. But it still eked out a profit because it knows how to sell used cars and how to make money selling them even during a crisis – though it made less money per unit than during the Good Times:

Those are the kinds of gross profits you’re supposed to make in the used car business during a crisis. Vroom, on its ecommerce platform, fell totally flat, with its total gross profit per unit of $686, compared to $2,623 at CarMax.

You see the problem?

Vroom, even during the Good Times, made only one-third of the gross profit per unit that CarMax made!

It boils down to this: These people at Vroom don’t know how to make money selling used cars. They’re just trying to buy the business.

This falls right back into the whole mania of money-losing companies that sell mundane consumer products or services – such as used cars or taxi and delivery services or lodging services – but are somehow considered tech companies that walk on water and can continue to lose money. And investors, those in the unicorn startup arena and those in the stock market, have been in love with them for years and have continued to shovel huge piles of money at them, despite their never-ending losses, in the hopes of somehow pumping up their valuations.