Why is everyone suddenly trying to sell their home?

“Active listings” in San Francisco skyrocketed by 137% year-over-year to 1,995 homes for sale in the week ended August 16, based on weekly data compiled by real-estate brokerage Redfin, from Multiple Listing Service (MLS) and Redfin’s own data. This is the biggest highest most stunning amount of inventory for sale since the very peak of Housing Bust 1 (chart via Redfin): 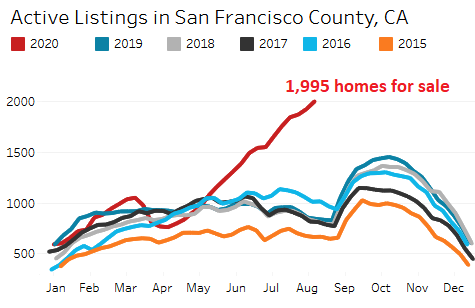 Note the normal seasonal surge in active listings after Labor Day through late October. But halfway into August, normally a slow time of the year when supply declines, supply instead exploded. This was “pent-up supply” that is now suddenly coming on the market.

Redfin’s data set doesn’t go back to Housing Bust 1. But according to MLS data, the number of homes for sale in August now exceeds the peaks in August 2009 and August 2010 by about 10%, according to local real-estate site SocketSite.

New listings jumped 124% from a year ago to 260 in the week ended August 16, according to Redfin data (chart via Redfin): 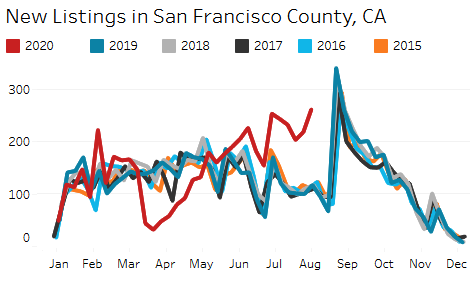 Weeks’ supply of homes for sale has more than doubled, from 9.3 weeks last year at this time to 21.2 weeks as of August 16, at the current rate of sales. The spike of supply through early May was a result of sales having collapsed in March and April (chart via Redfin): 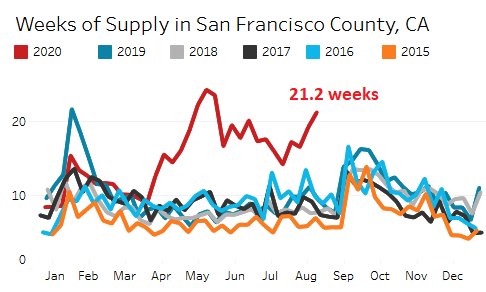 Pending sales rise but not nearly enough. In July and August this year, weekly pending sales have ranged from slightly down year-over-year to up significantly. In the week ended August 16, pending sales, at 115, were up 53% year-over-year. The four-week moving average was up 26%. In July and August, pending sales normally decline. But this year, they’re not declining; they’re coming out of a historic collapse that had maxed out at -77% in April. So there’s some pent-up demand, but not nearly enough to keep up with exploding pent-up supply (chart via Redfin):

What would Case-Shiller say?

The S&P CoreLogic Case-Shiller Home Price Index, released this morning, provides a different view and other intriguing insights into the San Francisco market, but lags months behind.

The first difference is the geographic area. The Redfin data above was for the County (and City) of San Francisco. The Case-Shiller Index covers the five-county San Francisco Bay Area (counties of San Francisco, San Mateo, Alameda, Contra Costa, and Marin).

The second difference is the methodology. The Case-Shiller Index uses the “repeat sales method.” It compares the sales price of a house that sold in the current month to the price of the same house whenever it had sold previously. To make it into the index, a house has to have been sold at least a second time.

I like sales-pairs as a method because it makes the index immune to changes in the mix of houses that sold. Changes in the mix can heavily skew median price indices. The Case-Shiller Index essentially tracks price changes for each house in the index over time and then builds an index out of the sales-pair data.

The main disadvantage of the Case-Shiller Index is that it lags massively behind. The price data is collected from public records, whenever it is entered into those records. Then the Case-Shiller Index operates on a “three-month rolling average” basis. The release today, titled “June,” was the three-month moving average for deals whose data became available in the county deed recorders in April, May, and June.

Prices for single-family houses declined for the second month in a row in June, down 0.7% over the two months, though normally the index rises during those two months. On a seasonally adjusted basis, the index declined for three months in a row, for a total decline over the three-month period of 1.3%. This whittled down the year-over-year gain to 1.4%: 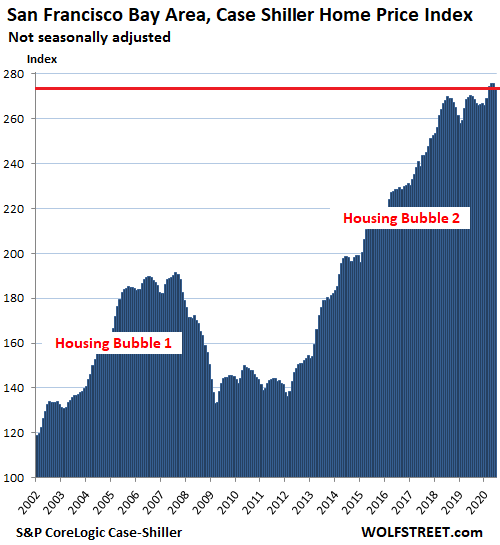 Sales pairs of single-family houses plunged 40.2% year-over-year in June to just 3,242 houses. The percent-changes in “sales pairs” are an indication of changes in sales volume. In the index, June and July reflect the spring selling season and are normally the peak months of the year, as you can see in the chart below, but not this year: 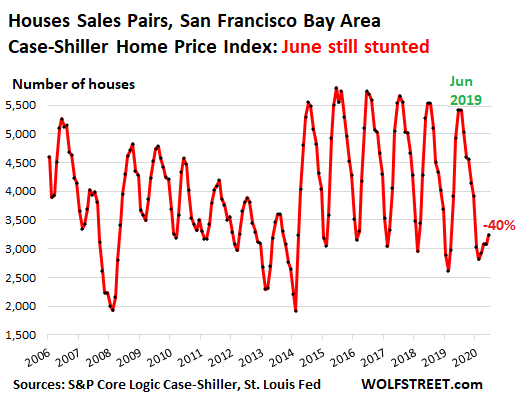 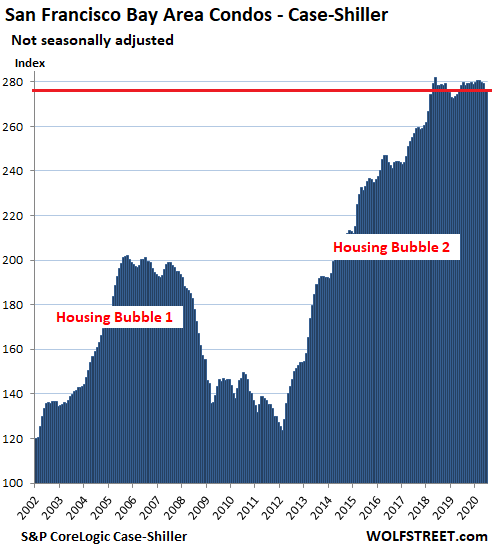 Sales pairs of condos plunged 50.5% year-over-year in June to just 707 condos, during what is normally peak selling season: 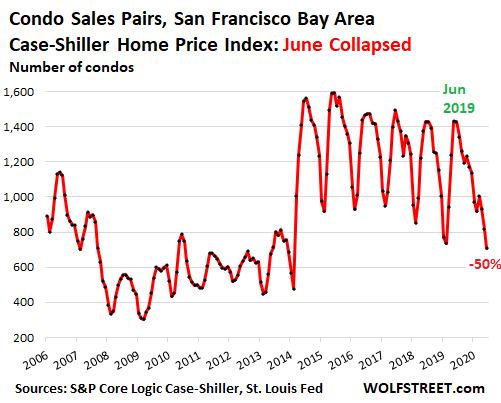 So what we’re seeing in San Francisco in August…

Is a record onslaught of homes for sale, particularly of condos, that has come out of the woodwork in June, July, and August, per Redfin’s data. Before the Pandemic, there was an inventory “shortage,” as the industry likes to call it, and now there’s a glut, all of a sudden.

The Case-Shiller index is now showing pricing weakness in April, May, and June. This is particularly pronounced with condos, extends back two years, and is now taking on momentum.

Trying to figure out why people are wanting to suddenly sell their homes in San Francisco is going to be an interesting guessing game, and there are likely lots of reasons. Some of those reasons come to mind right off the bat:

I’m standing in the middle of the street to take this photo. Why? Because I can. Read… Haunting Photos of San Francisco’s Desolate Financial District During Morning “Rush Hour”: Visual Effects of Work-from-Home