You guessed it: For over half of it, taxpayers are on the hook. Time to take a look.

The mortgage for “2 Cooper Square,” a 15-story luxury apartment tower with 143 units in the NoHo neighborhood of Manhattan, is now over 30 days delinquent, according to the Commercial Observer. In 2010, when the building opened, three-bedroom apartments sported asking rents “as high as $20,000 per month,” gushed the Wall Street Journal at the time. In 2012, the developer, Atlantic Development Group, sold the long-term leasehold in the building to Wafra Capital Partners in Kuwait for $134 million. In 2019, Wafra unloaded the leasehold  to David Werner Real Estate and Emerald Equity for about $85 million – a loss of nearly $50 million, or about 37%.

At the time of the deal, David Werner and Emerald obtained a mortgage from Goldman Sachs of $65 million. The mortgage was securitized by Goldman Sachs in September 2019, along with mortgages on other commercial properties, into the commercial mortgage backed security GSMS 2019-GC42,  where it represents 6.1% of the collateral.

And 15 months later, the mortgage is 30 days delinquent.

Occupancy plunged from 96% last year when it was securitized to 82% in the third quarter of 2020, according to a note by Trepp, which tracks and analyzes CMBS. Trepp notes that the loan has not yet been moved to the servicer’s watch list or the special servicer.

The other day, we discussed two luxury apartment towers whose occupancy rates had plunged into the 70% range during the Pandemic – the “New York by Gehry” in Manhattan whose mortgage had been moved to the servicer watch list, and the NEMA in San Francisco. But the mortgages on those properties were still marked as “current.” 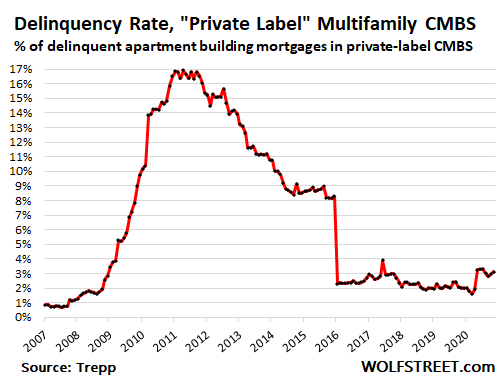 That straight line south occurred in January 2016 when a delinquent $3-billion CMBS loan tied to Blackstone’s $5.3-billion purchase of Stuyvesant Town-Peter Cooper Village in Manhattan – a property with 110 apartment buildings on 80 acres with 11,250 apartments – was paid off.

So for now, landlords of apartment towers in the centers of large cities, afflicted by the renters’ exodus and plunging rents, and landlords anywhere afflicted by renters not making rent payments, protected by eviction bans, are still trying to make mortgage payments on their rental properties, hoping that the surge in vacancies and non-payment of rents are short-term phenomena and that people will come back and fill those apartments and that tenants will catch up with the rent.

But how much apartment building debt is there, and who holds it?

These “private label” CMBS and other private label securitizations only hold a small portion of the total commercial mortgages backed by apartment buildings.

The total amount of multifamily mortgages outstanding in Q3 was $1.65 trillion, up by $31 billion from Q2, according to the Q3 report this week by the Mortgage Bankers Association, based on data from the Fed’s Financial Accounts of the United States, the FDIC’s Quarterly Banking Profile, and Wells Fargo Securities.

The US government: $798 billion, or 48.4% of the $1.65 trillion in apartment building debt, is backed by the federal government through Government Sponsored Enterprises (GSEs), such as Fannie Mae and Freddie Mac, and government agencies such as Ginnie Mae, which securitized many of these loans into CMBS, and sold them to investors. The government is on the hook for losses. And the Fed has acquired $9.3 billion of these “Agency” CMBS.

Banks and thrifts: $478 billion or 29% of the multifamily debt is held by banks and thrifts. The Fed has pointed out in the past that some regional and smaller banks are heavily concentrated on commercial mortgages, and that for these specific banks, a downturn in commercial real estate would pose a significant risk.

State and local governments hold $108 billion or 6.5% of this debt in pension funds and the like. This ultimately also sits on the backs of taxpayers.

Private label CMBS, collateralized debt obligations (CDOs), and other asset-backed securities only hold $52 billion, or 3.1% of this $1.65 trillion in apartment building debt.

The chart shows holdings by sector, red for Q3 and blue for Q2 (data from the MBA): 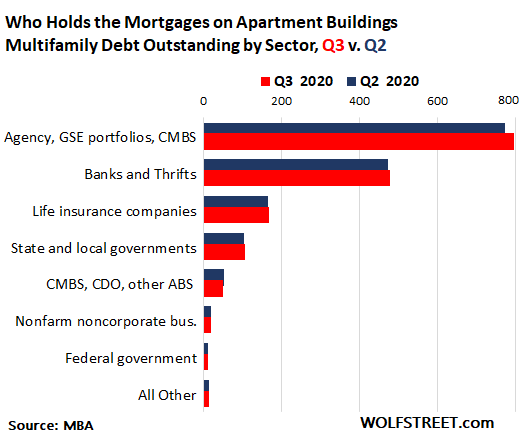 The US government started barreling into multifamily debt during the Financial Crisis. Until then, government-backed multifamily debt was about on par with the holdings of banks and thrifts. Since then, the government’s share (blue line in the chart below) has shot up to nearly 50%.

Banks and thrifts have remained active, and their total holdings grew over the years (red line), but their share declined, as the government’s share surged. 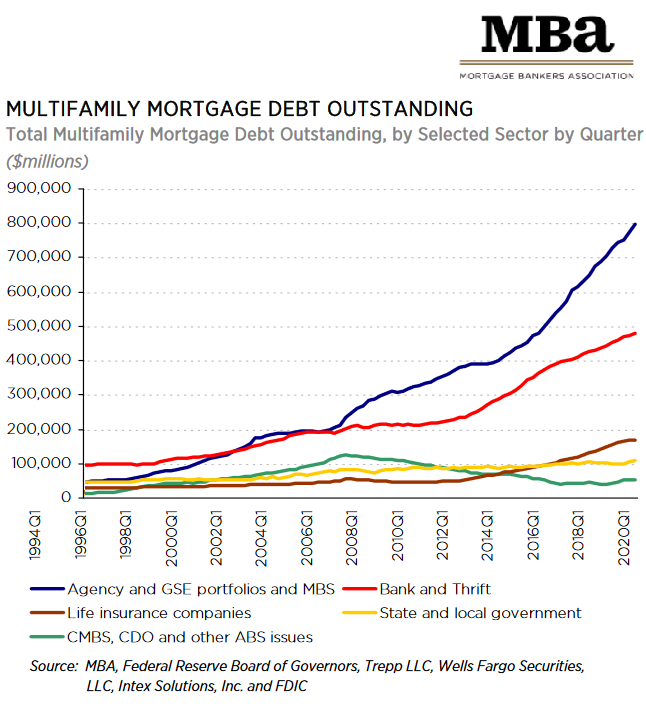 The federal government is guaranteeing nearly half of the multifamily debt outstanding. With state and local government holdings included, taxpayers are ultimately on the hook for $906 billion, or 55%, of it. So if this debt begins to topple in a serious way, it’s the GSEs and agencies that take a big part of the licking, even on CMBS that they sold to investors.

The good thing is that, in terms of commercial real estate, the GSEs and agencies are limited to multifamily commercial debt and they don’t work with mall loans and hotel loans, whose losses are now accruing to investors and institutions around the world.

186 comments for “Who Holds the $1.65 Trillion of Apartment Building Debt amid Eviction Bans and Plunging Occupancy Rates at High Rises?”