The big four banks are out. And other companies are out. But Big Tech is in, as big as ever, and Warren Buffett’s Berkshire Hathaway, after pooh-poohing share buybacks for years, is now the second largest share buyback queen.

In the third quarter 2020, companies in the S&P 500 Index bought back $101.8 billion of their own shares, according to S&P Dow Jones Indices this morning. While this still sounds like a lot of share buybacks, it’s down 42% from Q3 last year, and down 54% from peak share-buyback mania in Q4 2018 following the corporate tax cuts: 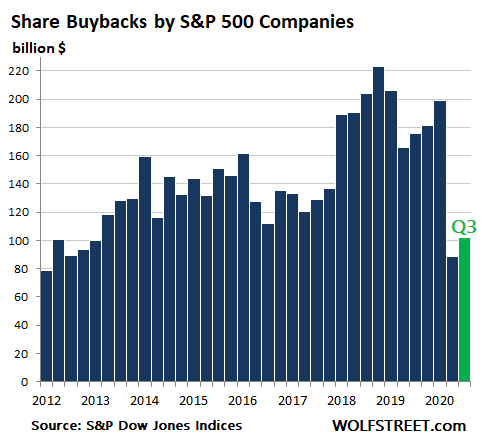 Since the beginning of 2012, the S&P 500 companies have bought back nearly $5 trillion of their own shares.

How much is $5 trillion? It’s nearly one-quarter of US 12-month GDP in current dollars. It’s about equal to the amount by which the US government debt has exploded over the past 12 months.

These $5 trillion could have been invested in expansion projects in the US, and in labor, and in training, or God forbid, in reducing the debt that Corporate America has loaded up on in a historic manner. 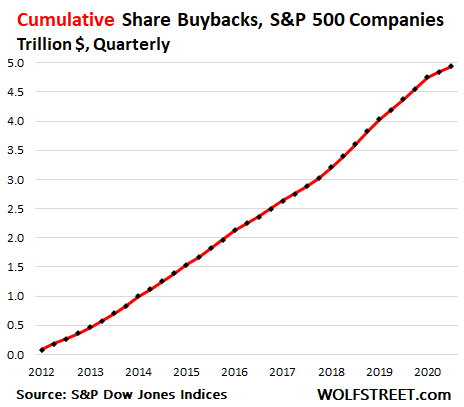 Many companies have borrowed heavily to fund these share buybacks. Nonfinancial corporate debt (bonds and loans outstanding, owed by companies other than lenders) has soared by $4.5 trillion since Q1 2012: 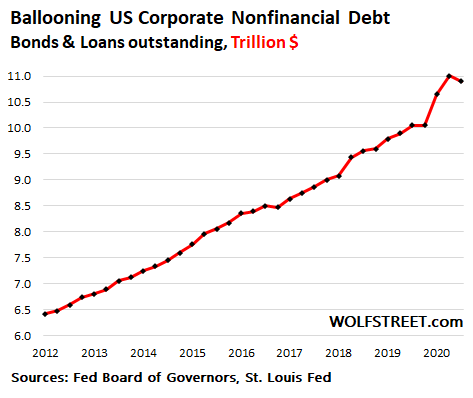 Corporate debt levels have been showing up in the Fed’s Financial Stability Reports. The corporate “debt overhang,” as the Fed calls it, frazzled Fed researchers in 2019 and it is now again cropping up in Fed research papers, including by the New York Fed a few days ago.

“We find that the economic costs of corporate debt booms rise when inefficient debt restructuring and liquidation impede the resolution of corporate financial distress and make it more likely that corporate zombies creep along,” summarize the researchers at the New York Fed. It was another research paper duly ignored by Fed Chair Powell.

Last year, the four big banks – Bank of America, Wells Fargo, JPMorgan Chase, and Citigroup – occupied the #2, #3, #4, and #7 spots on the Top 20 list of our share buyback queens. Now they’re gone from the list, having been told by regulators to stop share buybacks to preserve capital to absorb the coming losses from the Crisis.

Yes, Apple has one of the most solid balance sheets of Corporate America, but it’s $25 billion less solid than it was a year ago. Over the 12-month period when Apple bought back $76 billion of its own shares, its cash and short-term investments dropped by $10 billion (to $90 billion); its short and long-term debt rose by $14 billion (to $122 billion); and its shareholder “equity” – the difference between its assets and its liabilities – plunged by $25 billion (to $65 billion). That’s what share buybacks do; they hollow out the balance sheet, even the strongest balance sheet.

The scheme is top-heavy.

The top 10 share-buyback queens bought back $65.6 billion of their own shares in Q3, accounting for 64% of total share buybacks, up from 39% a year ago.

The top 20 share-buyback queens bought $78.7 billion of their own shares, accounting for 77% of total S&P 500 share buybacks. According to S&P Dow Jones Indices, historically on average, the top 20 account for 46% of total share buybacks. Everything nowadays concentrates at the top.

Number 2 on the list, Berkshire Hathaway, entered into this game in 2019 after pooh-poohing it for years. In Q3 it bought back $9.0 billion of its own shares, up from $5.0 billion for Q2; for the 12-month period, it plowed $17.8 billion into buying its own shares:

It’s all about Financial Engineering. When a company buys back its own shares, it pays cash for the shares. But the shares usually get canceled and are gone. As far as the company is concerned, the cash is gone too; someone else has it now. And “stockholder equity” – the difference between assets and liabilities, reflecting the company’s equity capital – drops by that amount.

That’s not a huge problem for a cash-flow rich company, such as Apple. But it’s a potentially mortal problem for many companies when they encounter rough water.

Share buybacks lower the share count, and so earnings are divided by fewer shares, to produce higher earnings per share (EPS) and a lower P/E ratio, and thereby hopefully a higher share price, without actually having to sell more or earn more.

There is an opposite to share buybacks: Issuing new shares to raise cash. This strengthens a company’s capital position, but dilutes shareholders and earnings per share. Young companies do this routinely after their IPO, but for a big mature company, it’s generally anathema – except for Tesla, whose CEO walks on water.

For example: The airlines, after buying back their shares at very high prices (the big four airlines bought back $44 billion of their shares between 2012 and early 2020) to drive prices up, entered this crisis in a precarious position. And to raise cash and survive, they not only issued tens of billions of dollars in new debt, but they also sold new shares, but at far lower prices. Buy high, sell low.

They were lucky they could sell new shares – thanks to the blistering rally the Fed created in the market. Normal markets are very unforgiving when teetering companies whose share price has been cut to a few bucks try to sell more shares to survive.

But cryptos and DiFi created a big mess as hidden leverage is blowing up, and mess spreads to stocks.