Top 4 airlines burned $45 billion on share buybacks since 2012. If airlines run out of money, Chapter 11 bankruptcy works. Airlines proved it.

Airlines in the US will get another $17 billion taxpayer-funded bailout if the $748 billion “bipartisan” stimulus proposal that the four most senior Congressional leaders are discussing this afternoon makes it into law.

There is a commitment now to pass something. Many items that either party wanted but that the other refused to yield on have been trimmed out of this proposal, including the $1,200 stimulus checks. But their airline bailout is in it.

Democrats and Republicans may not agree on much of anything these days, but they both love to bail out airline shareholders and bondholders. And that’s what this is – dressed up as payroll protection and airline support program.

The Democratic-backed $2.2 trillion stimulus package that the House passed at the end of September but that was not taken up by the Senate included $25 billion to bail out airline shareholders and bondholders. The airline industry has been lobbying with all its might to get this money. So now, it looks like they will have to make do with $17 billion.

This new bailout comes on top of the original stimulus bill, which was passed in March and which came with $25 billion in so-called payroll support for the airlines, an additional $25 billion in loans for passenger airlines, and over $10 billion in grants and loans for cargo airlines and aviation contractors. The payroll protection provisions expired on September 30, under the assumption that by then the airlines would be operating more or less back at normal.

But they’re not. Delta Air Lines, American Airlines, and United Airlines have warned in recent days about once-again declining bookings following the Thanksgiving surge of Covid infections. Airlines have reported spikes in cancellations. Leisure travel had picked up, but the very lucrative business travel and international travel remain in a zombie state. The V-shaped airline recovery that Wall Street had promised in late spring and early summer has gotten crushed

The number of passengers going through TSA checkpoints to enter the secured areas at US airports through December 14 has dropped sharply since late November. The chart shows the number of TSA checkpoint screenings in 2020 (red) and 2019 (green) per day (thin lines) and the seven-day moving averages (bold lines): 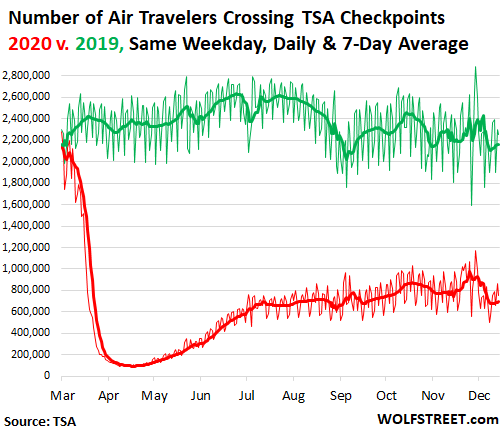 The daily checkpoint screenings are now down 68% (seven-day moving average) from where they’d been on the same day in the same week a year ago, the worst levels since early September: 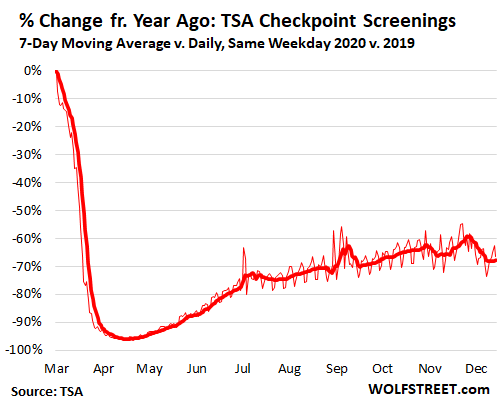 The airline lobbying group, Airlines for America, said on Monday when the bipartisan proposal was presented that it “enthusiastically” supported the $17 billion handout for the airlines. And airline stocks rallied. The WOLF STREET index of the top seven airlines in the US rose 2.4% today and is up 23% since mid-November: 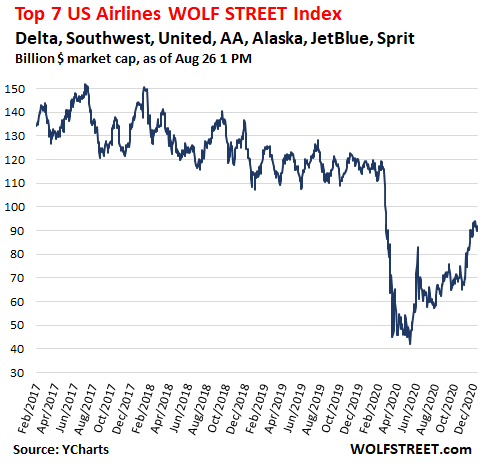 Airline shareholders feel the money. And taxpayers feel the pain. This rally comes as revenues at the largest airlines have collapsed by 60% to 70%, and as debt has piled up in previously unthinkable amounts, and as airlines continue to report huge losses and – despite massive capacity cuts and layoffs – dizzying “daily cash burn” figures.

Taxpayer money props up those shares and is a basic transfer of wealth from the American public to airline shareholders and to airline bondholders.

This is the same industry where the top four airlines — Delta, United, American, and Southwest — willfully blew, wasted, burned, and annihilated $45 billion on share buybacks since 2012 to enrich their shareholders, including their own executives: 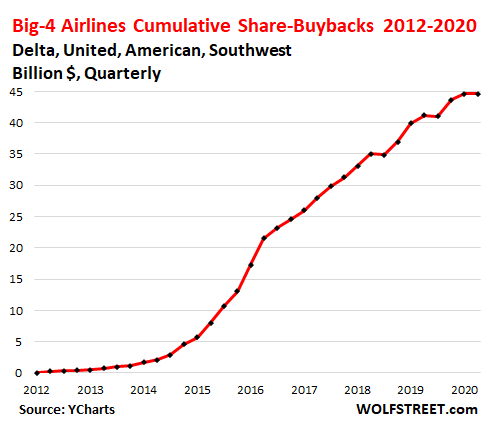 I was on an international Delta flight when Delta filed for bankruptcy, and never noticed the difference. The plane didn’t crash, and the connecting flight was there, and everything continued as normal and my frequent flier miles remained intact. Airlines know how to do that.

The cost of restructuring the debt falls on shareholders and creditors – not taxpayers. If an airline filed for bankruptcy today, the ownership would be transferred from shareholders to certain creditors. Shareholders would be wiped out, or nearly wiped out. Unsecured creditors would get a big haircut. The airline would continue to operate through the proceedings and would emerge under new ownership, with less debt, and with a scale of operations that would be appropriate for the new environment, and it would allow the airline to thrive going forward.

But no. There is universal consensus in Congress that Shareholders and bondholders have to be bailed out. And since that sounds unpalatable, the bailout gets dressed up in payroll-protection and airline-support lingo. And so, there’s another $17 billion for a shareholder and bondholder welfare program.