Stimulus Fatigue sets in. Second month of declining retail sales in a row. But online sales eked out a new record, if barely.

Retail sales in November fell 1.1% from October, the second month in a row of declines, and they even fell with restaurants and bars removed from the total. Sales at nonstore retailers, the placeholder for ecommerce, eked out a new record. This is the second month now of what I called a month ago Stimulus Fatigue.

But wait… the Pandemic-induced switch from services – such as airline tickets, concert tickets, hotel bookings, and haircuts – to goods – such as food & beer at home, bicycles, and consumer electronics – is still on. In November, retail sales of $547 billion (seasonally adjusted) were still up 4.1% from November last year, according to the Census Bureau this morning. And for the 11-month period, they were essentially flat ($5.70 trillion), despite the collapse in March and April: 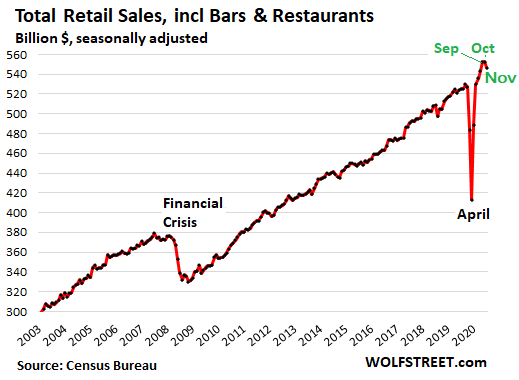 The metric of “retail sales” measures the sale of “goods” at various establishments and online. It doesn’t measure the sale of “services,” such as airline tickets, insurance, or healthcare services. During the Pandemic, consumers splurged on durable goods and food at home like never before, as free money flooded over them from the government, and as they cut back on other spending, such as plane tickets, payments on mortgages and student loans in forbearance, and on rent, protected by the eviction bans. A refinancing boom, triggered by record low mortgage interest rates, allowed consumers to extract cash from their homes and lower their mortgage payments.

Part of this money from the government, and money not spent, and money extracted from the home was spent on goods, and part of it was used to pay down credit cards, whose balances have plunged 10.3% from a year ago.

Sales at new & used auto dealers and parts stores, the largest category of retail sales, accounting for over 20% of total retail sales, fell 1.7% in November from October, to $113 billion (seasonally adjusted). But they were still up 5.9% from November last year and were flat for the 11-month period.

These sales are measured in dollars, and those dollar-sales were boosted by exploding prices of used vehicles (+11% year-over-year), and by a higher proportion of expensive vehicles in the mix among new vehicles, as the wealthy got wealthier during the crisis (“what crisis?”) and bought more expensive vehicles. But the number of new and used vehicles sold remains in a deep hole for the year – and November unit sales made that hole deeper: 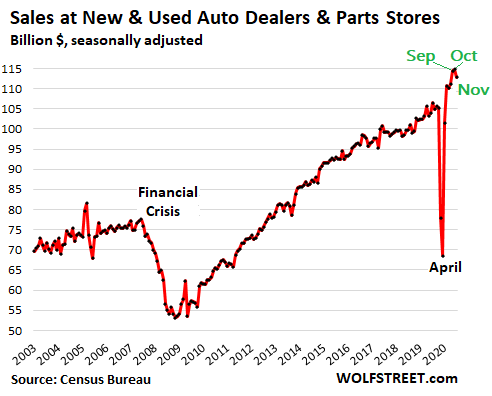 Sales at ecommerce sites and other “non-store retailers” (mail-order operations, stalls, vending machines, etc.) in November ticked up 0.2% from October, to a record $87 billion, topping off a 29.2% spike since November last year. This is the second-largest category in retail sales, after auto and parts sales: 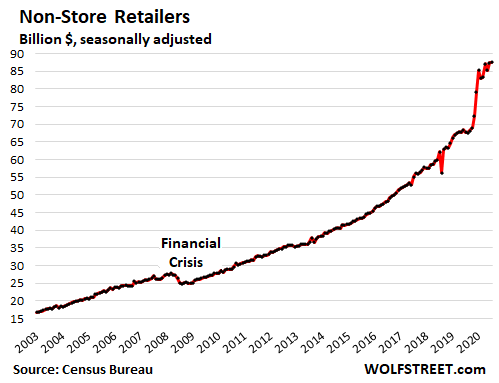 Sales at Food and Beverage Stores, the third largest category, rose 1.6% in November from October to $71 billion (seasonally adjusted) and are up 11.4% from a year ago, given how much consumption has switched to the home from restaurants, cafés, cafeterias, office coffee makers, office vending machines, and office tissue closets: 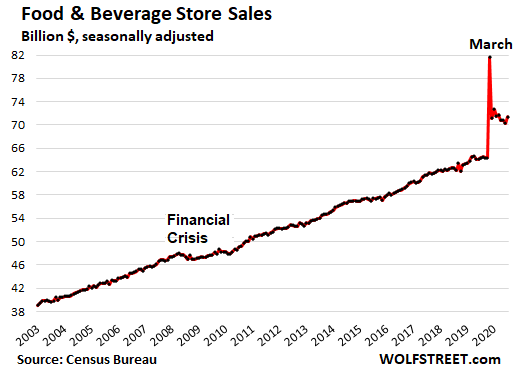 Sales at Restaurants & Bars fell 4.0% in November from October, to $53 billion (seasonally adjusted), and were down 19% from a year ago.

In late November, the spike in Covid infections began to hit restaurants with new restrictions and with once-again leery consumers choosing to eat at home rather than going out. By the end of November, the number of seated diners had plunged by 56% from a year earlier. Many of the new restrictions went into effect at the very end of November and in December, and are not yet reflected here: 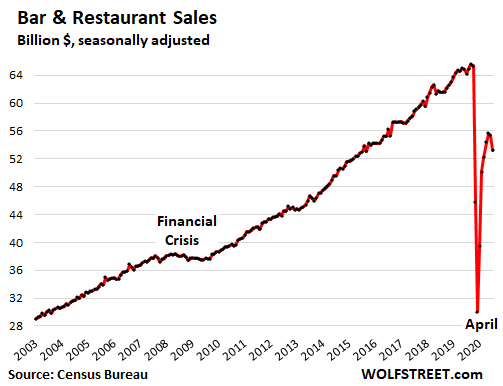 Sales at general merchandise stores (minus department stores) ticked up 0.3% in November from October, to $53 billion, and are up 8.4% from a year ago. The brick-and-mortar stores of Walmart, Costco, and Target are in this category, but their booming ecommerce sales are not; they’re included in ecommerce sales: 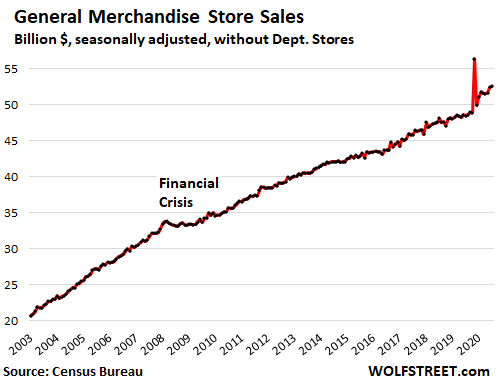 Sales at department stores dropped 7.7% in November from October, to just $9.0 billion, and have plunged 19% year-over-year. For the 11-month period, they’re down 18%. The brick-and-mortar sales of Macy’s, Kohl’s, Nordstrom, J.C. Penney, etc. are in this category, but their ecommerce sales are not; they’re included in ecommerce.

The once iconic retail institution of department stores – in their heyday, many of them were locally owned – has been obviated by events including the internet. For Americans, department stores have outlived their usefulness. For mall landlords, they’ve turned into a nightmare. The #1 and # 2 mall landlords – Simon Property Group and Brookfield Property – have ganged up to buy J.C. Penney out of bankruptcy, apparently to control the decline of their malls.

Since the peak in December 2000, department store sales have collapsed by 55%, despite two decades of inflation and population growth, and the Pandemic has merely accelerated the process: 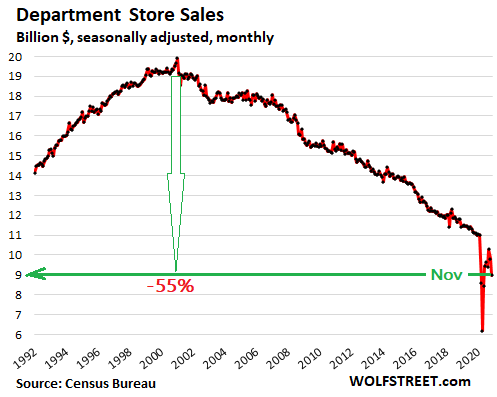 Sales at clothing and accessory stores fell 6.8% in November from October, to $18 billion, and were down 16% year-over-year. For the first 11 months of this year, sales were down 27% from the same period last year.

Sales have been wandering off to the internet years before the Pandemic. Americans were buying lots of clothes but figured out how to do so on the internet, with its choices of styles, sizes, colors, materials, and prices. And by 2018, growth at brick-and-mortar clothing and accessory stores had completely stalled.

Then came the Pandemic, and even people who didn’t want to buy clothes online, ended up buying them online, figuring out that it works just fine. And as people were working from home, they didn’t need to buy work clothes. Sales in November dropped to where they’d first been in 2007: 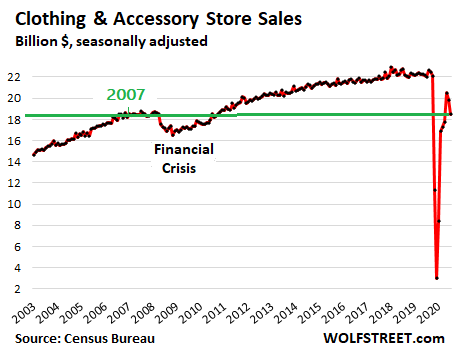 Sales at building materials, garden supply and equipment stores rose 1.1% in November from October, to a new record of $38 billion, and were up 19% year-over-year. Americans – contemplating staycations, backyard entertainment, work-from-home, and many other changes – have been sprucing up their homes, decks, and yards, and these stores have been booming: 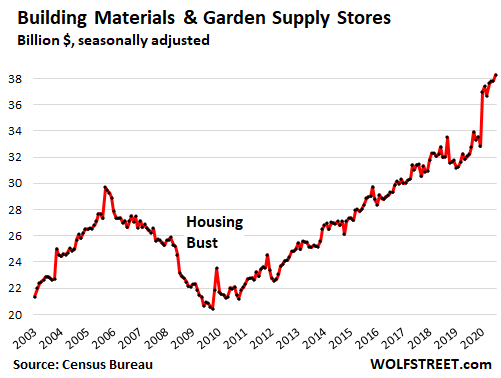 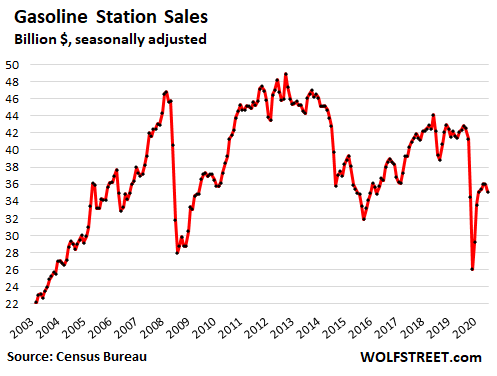 Sales at sporting goods, hobby, book and music stores ticked down 0.6% in November from October, to $7.8 billion, but are up 20% year-over-year. The booming ecommerce businesses that sell these goods, including Amazon, are not included here. This is just what’s left over in terms of sales at brick-and-mortar stores. 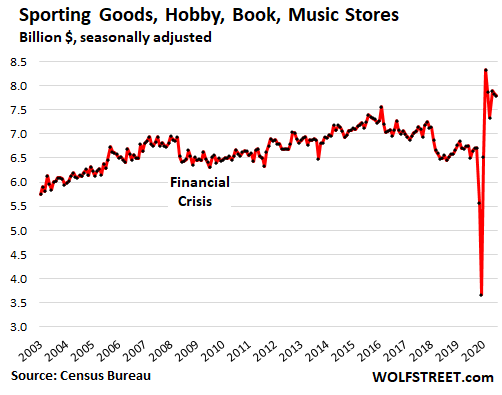 Sales at furniture and home furnishing stores fell 1.1% in November from October, to $10 billion, but were still up 3.6% year-over-year. Year-to-date, sales are down 6.6%. Ecommerce has for years been seriously eating into this category of brick-and-mortar stores. Wayfair, which sells nearly all of its furniture and furnishings online, has become the 8th largest ecommerce retailer, behind Best Buy and Target, according to eMarketer: 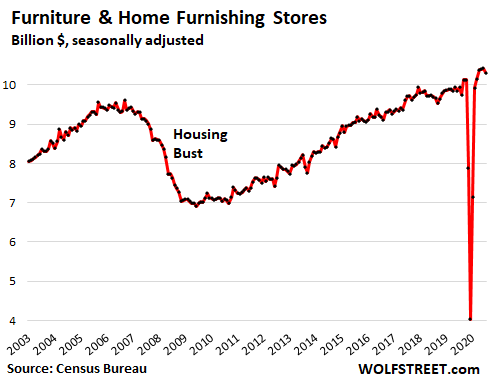