Despite the rampant indoorification of outdoor dining.

The second wave of the Pandemic is gripping the restaurant business that had already been battered by the first wave. Given the exploding infection rates across the US, restaurants had to dial back their services, and in a number of cities even outdoor dining is now off-limits. And in many cities where it’s not off-limits, the winter weather makes it very difficult, despite the conceptually dubious indoorification of outdoor dining, with sidewalk buildings fashioned of plastic sheets, plexiglass, wood, and steel.

The number of “seated diners,” a daily measure OpenTable provides to track walk-ins and diners with reservations, has been dropping since the end of October, compared to the same weekday in the same week last year. At the end of October, the seven-day moving average of the number of seated diners across the US was down 40% from a year earlier. For the seven days through November 28, the number of seated diners was down by 56%, the lowest since early August. The reading of “-100%” in April, meaning essentially no seated diners due to the lockdowns, is once again playing out in some cities, and we’ll get to them in a moment: 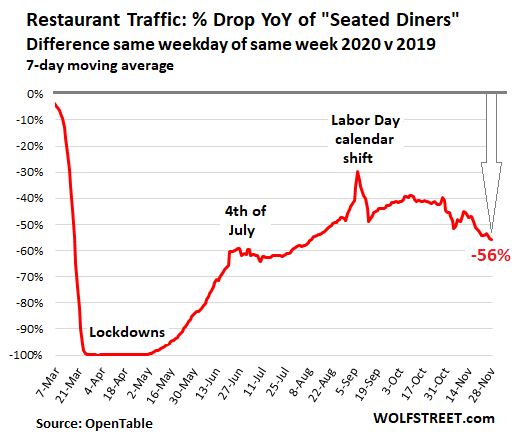 The data on seated diners is based on a sample of 20,000 restaurants that shared the information with OpenTable, and includes walk-ins and diners with reservations.

Half of the six cities in the West and Hawaii for which OpenTable provides data have closed all sit-down dining in recent days, including outdoor dining, and the number of seated diners has collapsed by nearly 100% from a year ago to near-zero in Portland (yellow) and Seattle (red) starting November 18, and in Los Angeles, starting effectively November 26.

Since the “pause” in Los Angeles has been effective for only three days in this data, it is not yet fully reflected in the 7-day moving average, which is down 80% (green).

In San Diego (black line), the 7-day moving average of the number of seated diners has dropped from a reading of -27% at the end of October to -48% now. But Honolulu (purple) has shown a steady uptrend since its second lockdown in early September and is now at -71%.

In San Francisco, outdoor dining remains open, but indoor dining has been re-closed. Properly dressed folks can still tolerate a leisurely dinner on the sidewalk, as long as it’s not raining (but rainy season is inching further into the calendar). For those not wanting to sit in the cold wind or rain, the indoorification of outdoor dining at some restaurants provides relief. The number of seated diners (gray) is down 83% from a year ago: 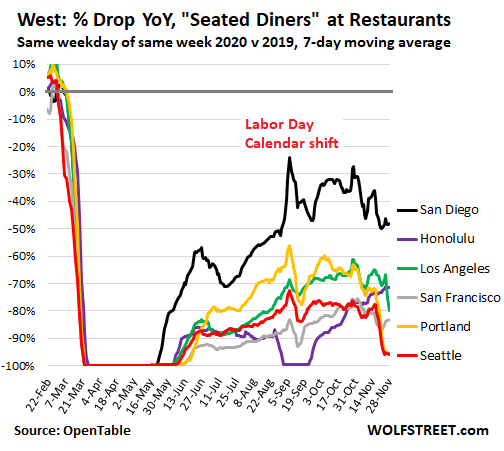 Cities in the Southwest and in the Rockies.

In Denver, indoor dining was shut down on November 18. Outdoor dining is allowed. But OK, for example, this evening the temperature is forecast to drop to 25° F. Major indoorification would be required to make a leisurely dinner outside possible without the food freezing to the plates. The number of seated diners (red) is down 75% from a year ago.

At the high end, Las Vegas is under Nevada’s new limitations that allow restaurants to be open at a capacity of 25%, indoors and outdoors, with no more than four people per table. The number of seated diners in Las Vegas is down 32% (black) from a year ago.

Dallas, Phoenix, and Austin are clustered together, with seated diners down between 45% and 48% from a year ago. Houston is down 38%, the second highest, just below Las Vegas: 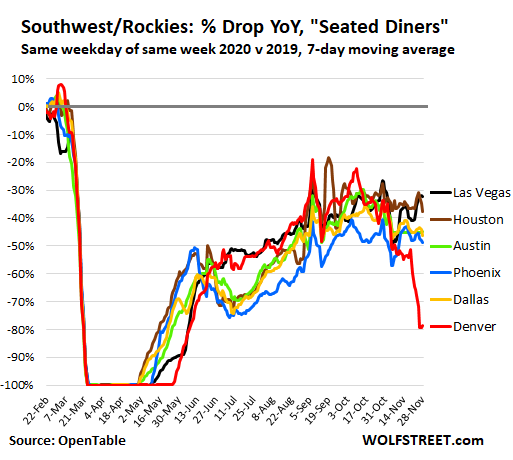 Cities in the South.

Louisville switched to outdoor dining only on November 20. Neither restaurants nor diners – and certainly not the weather, 38° F and rain in the forecast for tonight – were prepared for the switch. The number of seated diners collapsed by 88% from a year ago and from readings of around -50% a few weeks ago (red). Tampa is at the high end, with seated diners down just 19% from a year ago, followed by Miami (-27%):

Renewed restrictions on indoor dining have been rippling across the cities on the East Coast. Hardest hit was Philadelphia where indoor dining ceased on November 20. Outdoor dining can continue. This caused the numbers of seated diners to plunge by 90% from a year ago (the highest reading had been at around -50% in early October). In Boston, the top of the batch, the number of seated diners was down 66% from a year ago: 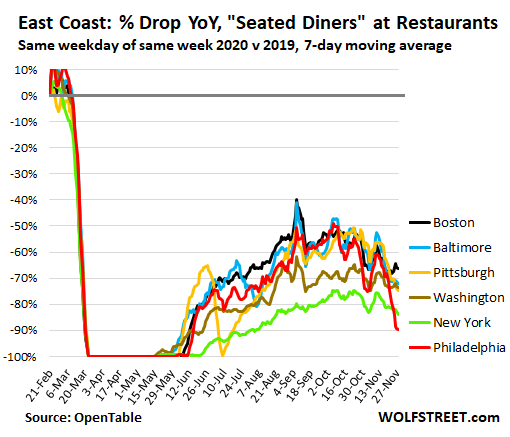 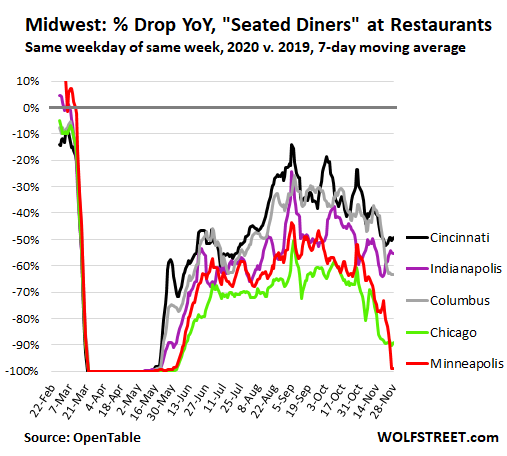 In late-September and October, the restaurant recovery got stuck at fairly low levels, with many restaurants already gone. Since then, the explosion of the infections across much of the US has unwound part of that recovery, back to where it had been in early August.

But in some cities, the “recovery” has been unwound to where it is revisiting the April-lockdown phase, with the restaurant business essentially shut down. Given the deterioration in recent days, and the ongoing surge of Covid, and the feared acceleration of infections following the holidays, many more restaurants will not make it through this phase.

People are massively striking out on their own. But new businesses with planned wages have been getting scarcer since 2007. Read… This Spike of New Businesses is a Doozie, on Several Levels

143 comments for “The State of American Restaurants, by City: The Catastrophe of the Second Wave”