We may well see more of these types of charts cropping up for other markets that too went haywire this year, and that too will begin to grapple with the underlying dynamics.

The used vehicle market – retail and wholesale – has gone through some history-making gyrations this year, and those gyrations are now being unwound. In the Good Times, about 40 million used vehicles were sold wholesale and retail per year. This year will be quite a bit below that. In November, sales lost more ground. But prices had gone haywire, and they’re now in the process of “normalizing.”

During July, August, and September, powered by skyrocketing used-vehicle wholesale prices in prior months, used-vehicle retail prices spiked by 15.1%, according to Consumer Price Index data, including a 6.7% spike in September from August, the biggest month-to-month jump since 1969. But in October, retail prices for used vehicles turned around. And in November, according to the CPI for Used Vehicles released today by the Bureau of Labor Statistics, prices fell 1.3%, which brought the year-over-year price increase down to a still red-hot 11%: 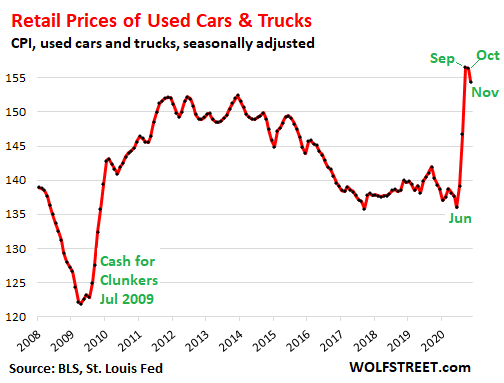 Given the spike over the summer, the index remains nearly 11% higher than a year ago, the biggest year-over-year price increase since the price surges following the “Cash for Clunkers” program in 2009, which was designed to boost new vehicle sales, and along the way wiped out a generation of perfectly functional used cars well-suited for low-budget buyers. But hey, let them walk. And everyone else paid more.

Retail prices react to many dynamics, including wholesale prices, which determine the costs for dealers that go to auctions around the country to buy vehicles and restock their inventory. Millions of vehicles are sold at auction every year. This is a very liquid market. The pricing data from auction sales is widely distributed in near-real time to the industry, and some of it is accessible for free to anyone doing internet research before car shopping. It forms the basis for pricing on dealer lots, from trade-ins to the prices negotiated in each deal.

And the wholesale auction market went haywire this year during the early phases of the Pandemic. But it’s now calming down under still weak demand and massive supply from rental car companies trying to defleet, including Hertz – its vehicles started showing up in August after it got permission from the bankruptcy court at the end of July to sell them. And used vehicle inventories, both retail and wholesale, are beginning to pile up.

The prices of used cars and trucks sold at wholesale auctions across the US during the latest reporting week through November 29 dropped 1.6% from the prior week, the 15th week in a row of week-to-week price declines, after the historic 36% spike from April through mid-August, according to data reported by J.D. Power. Wholesale prices are now down nearly 11% from mid-August but are still 3.8% higher than they’d been at the beginning of March: 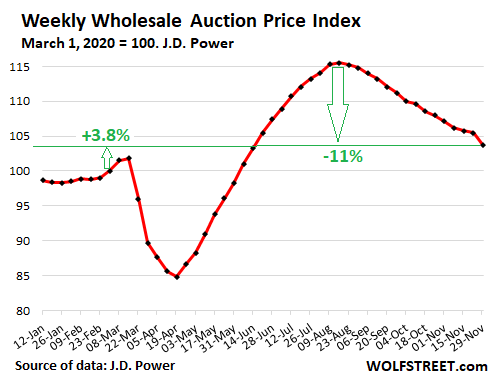 The volume of vehicles up to eight years old being sold at auction has been declining since the Pandemic-peak in June. The four weeks before Thanksgiving, volume had been around 80,000 vehicles, according to J.D. Power data. Then in the week ended November 29, which included Thanksgiving, volume plunged, but that was largely due to the holiday. The 80,000-level before the holiday week is more indicative of the current wholesale demand, down roughly 19% from what is typical at this time of the year: 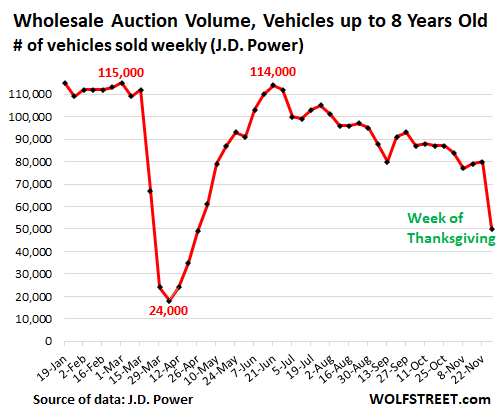 And there is plenty of supply, retail and wholesale, at the end of November, according to estimates of Cox Automotive:

The way a market should work.

What we’re looking at is a market where demand has been down sharply so far this year and where an event – the Pandemic – caused disruptions of all kinds, including the bankruptcy of two large rental car operators, Hertz and Advantage, whose vehicles are part of the supply picture of the market. And all metrics went haywire.

But now the process of normalization is taking place, guided by below-average demand and lots of supply. And the market is doing its thing and discovering prices, as a market is supposed to, with pricing dynamics slowly resolving market issues.

The wholesale pricing and volume charts are particularly interesting since they’re weekly, and therefore more immediate, not adjusted for seasonality or other factors. They show what this market has been through and how it is now normalizing from the wholesale levels on up. And we may well see more of these types of charts cropping up for other markets that too went haywire this year, and that too will begin to grapple with the underlying dynamics.

79 comments for “The State of American Used Cars & Trucks: A Market Gone Haywire and Now in Process of “Normalizing””