Bounce back to what? The Pandemic Scrambled Long-Term Trends in both directions.

Total miles driven in September on all roads and streets in the US fell by 8.6%, or by 23.4 billion vehicle miles, compared to a year earlier, to 248.3 billion miles, according to the Federal Highway Administration on Friday. While that year-over-year decline is huge by historic standards, it’s the smallest year-over-year decline since the Pandemic started. 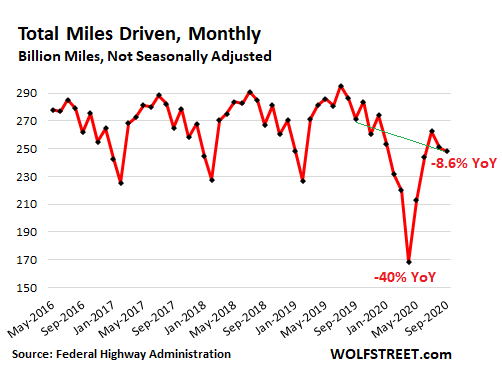 Total vehicle miles driven for the first nine months of 2020 fell by 14.5% from the same period last year – or by 355 billion miles – to 2.09 trillion miles of travel. This is a historic decline that knocked the nine-month total back to where it had been in 2001. 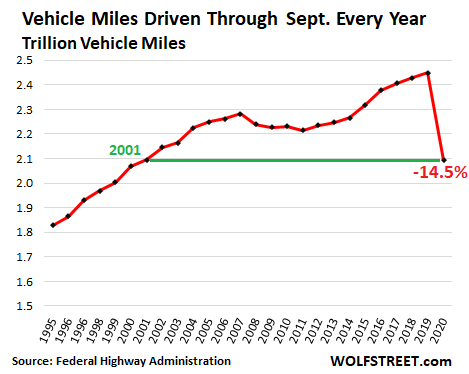 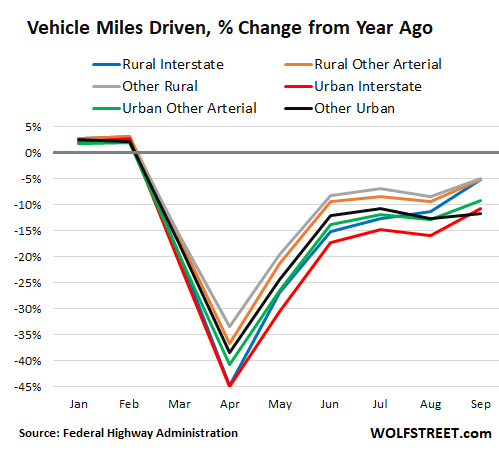 Total miles driven per year hit a record in 2019. But the number of people of driving age (approximated by Census Bureau’s civilian population over the age of 16) grew faster than miles driven, after 2003.

In 2003, based on Census Bureau estimates, there were 221.2 million people aged 16 or older in the US (who were not in penal and mental facilities, homes for the aged, etc. and who were not on active duty in the Armed Forces). In 2019, there were 259.2 million. An increase of 17%. But over the same period, miles driven increased by only 10%. 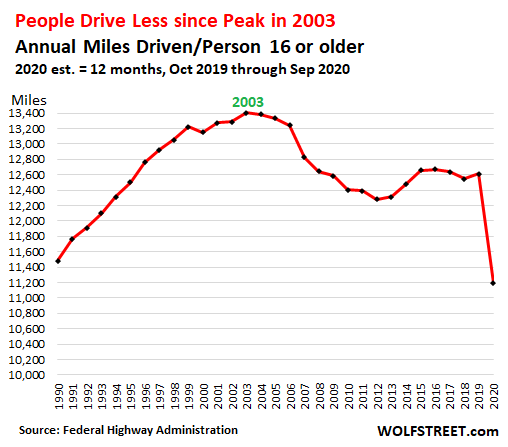 Why the long-term decline per potential driver?

The question arises: Do rideshare companies, such as Lyft and Uber, have anything to do with the lower miles driven per potential driver before the Pandemic? The idea would be that people got rid of their car or never owned a car, and rely on rideshare services to get around.

In theory, the answer would be No, because the miles driven by rideshare vehicles are also captured by this data and are part of this total.

In practice, the equation may be more complex because people without a vehicle may also rely more on riding with friends, using mass transit, walking, riding a bike, etc., in addition to using rideshare services. And this would reduce the miles driven.

Before the Pandemic, there was a trend that people – often younger people and empty-nesters – flocked to city centers, following the construction boom of apartment and condo towers. They would live closer to the action and would have to commute less or could walk to work, etc. And working from home has been a trend for years, and that too impacted how much people drive. Mass transit is also a factor, particularly in cities where commutes by car had become hellish.

But the Pandemic scrambled the trends.

We have already seen a significant outflow of high-rise apartment dwellers from city centers to the suburbs or further afield. And these people would drive more. We have also seen that usage for mass transit has plunged and remains low, and many people who used to take mass transit are now driving (the hellish commutes have gotten a lot better in some places).

On the other side of the ledger, working from home has become mandatory with many companies for their office employees, and this reduces miles driven.

Whether the trend to move to the suburbs or further afield will be sustained remains to be seen.  Working from home has been a trend for years. The Pandemic made it the rule for office workers. Many companies have made work-from-home permanent or a permanent option for many of their employees. Others have not. After the Pandemic, some of this will be reshuffled. But it appears likely that the trend of fewer miles driven per potential driver, after bouncing off the Pandemic low, will continue to trend lower. And this is another element in why the auto industry is so horribly mature.

Volkswagen has gotten the memo, after its dreams of diesel domination collapsed into Diesel Gate: The future is going to be EVs. These technologies are spreading to commercial trucks too, including at Volkswagen’s Traton, one of the largest truck makers in the world, acquirer of Navistar. Read… Volkswagen to Throw $86 Billion at EVs over 5 Years. GM, Ford, Others Plow Mega-Bucks into Shift to EVs. Tesla Instigated It