Little guy wriggling more or less adroitly between boots of giants amid the internet advertising crisis for publishers. But WOLF STREET traffic jumped 30% this year. Thank you!!

This has been a crazy year for the publishing business, where I’m just the little guy with my WOLF STREET media mogul empire, wriggling more or less adroitly between the boots of giants. The New York Times, the Wall Street Journal, and many other publications have reported record site traffic, and strong increase in subscription revenues, but a sharp decline in ad revenues. Google and Facebook have figured out how to get the lion’s share.

The giant of giants, Google has put itself at the center of the infrastructure of internet advertising with its various services and ad exchanges. And it has become a huge publisher of sorts via search and its various news services, without creating content. In the second quarter, it experienced a year-over-year revenue decline. And it appears, it’s squeezing publishers even more than before to boost its own results, from what I can see in my dealings with it. You get the drift. In the third quarter, Google reported gangbuster results.

Facebook, the other giant of giants in internet advertising, has also placed itself in the center of the ad business, but in a different manner, and it too reported an increase in revenues in the third quarter.

However, the publishers in the classic sense have gotten squeezed. The New York Times reported that in the third quarter, as subscription revenues rose 13%, ad revenues plunged 30%.

News Corp, which owns the Wall Street Journal and many other big publications, TV channels, and other outlets around the world, said that its subscription revenues ticked up 0.7% while ad revenues plunged 45%.

The internet has changed the power structure of advertising, with Google and Facebook getting most of the spoils. This shift has been going on for years and has upended the newspaper publishing industry – long before Covid-19.

But it’s the most exciting thing I’ve ever done, and I’m having a blast.

For little guys like me, the internet opens doors to readers directly. That’s huge. In theory, advertising allows us to make our publications free, and open to all, and it doesn’t matter whether homeless and reading my site at the library or whether partner at Goldman Sachs and reading my site in a corner office.

I’m in a thrilling business, and I’m thrilled to be in it, and I work ungodly hours, doing what I love doing, and my humble site has been growing every year. But 2020 was special.

Traffic in the 10 months so far jumped by 30% year-over-year to 1.3 million pageviews per month on average (over 13 million pageviews in total). I spend zero money on advertising the site. Growth is all organic. So this 30% increase in traffic is great. Thank you, Dear Readers!

Yet, like other publishers, despite the 30% growth in traffic, ad revenues dropped 17%. At one point, it was down a lot more.

I use four ad services and ad agencies, one of which is Google. But Google also backfills when the other ad services don’t have enough ads to post. If you’re overseas, you’re likely seeing only Google ads. Google ads are everywhere, directly and indirectly. Despite their large presence, Google ads account for less than one-third of total ad revenues.

Donations from readers are crucial; WOLF STREET needs your support.

Donations show me that what I’m doing matters to you, and that you enjoy reading the site, and maybe get a chuckle out of it once every now and then. I love reading the notes that come with some of the donations. And I immensely appreciate each donation. Your donations are crucial in supporting WOLF STREET. The site depends on you.

Many of you have already generously donated throughout the year by clicking the little beer mug at the bottom of each article, and I thank you so much!

Some readers use ad blockers, and I totally get why, and I don’t blame anyone for using them. That’s why, unlike many other publications, my site doesn’t use “ad-blocker blockers.” But ad blockers deprive my site of ad revenues. If you would like to support the site, please donate. I appreciate it immensely.

The donate button takes you to WOLF STREET’s PayPal page where you can use your debit or credit card. You do NOT need a PayPal account. Tip: On that page, enter the amount you wish to donate before you click the “Donate with a Debit or Credit Card” button, or else it doesn’t work:

Or you also can mail a check to (very much appreciated):

Thank-you gesture: a WOLF STREET glass mug if you donate $100 or more.

I still have some of these hilarious “Nothing Goes to Heck in a Straight Line” 15-oz glass mugs at my media mogul empire headquarters. But the Wolf Street Store, which was managed by a company where commenter “Ripp” worked, has run out of those mugs, and they’re no longer for sale.

On the other side of the wrap-around design is a hilariously howling wolf, which would be me: 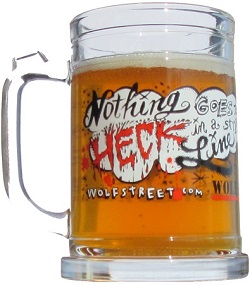 If you donate a very generous $100 or more and would like a mug, please then specifically email me because I already sent mugs to people who didn’t want them?

Email me your shipping address in the US (I cannot ship the  mugs outside the US) and your phone number (FedEx will not deliver without it) to: howlatwolfstreet@gmail.com

Thank you for coming to my humble site, for your many, many comments, and for your support. Wolf

85 comments for “My Humble Site Is the Most Exciting Thing I’ve Ever Done. A Reminder: Please Donate to WOLF STREET”