While US Farmers Struggle to Find Empty Containers for Exports.

The freight rates that container carriers charge for shipping containers from Shanghai to the US West Coast has exploded to a new record of $3,871 per 20-foot-equivalent unit (TEU) in the week ended November 13, and to $4,676 per TEU to the US East Coast, according to the Shanghai Containerized Freight Index (SCFI), which tracks the spot rates of shipping containers from Shanghai on 13 major shipping routes. The index includes ocean freight rates and seaborne surcharges.

The SCFI for all 13 routes jumped combined over 11% last week compared to the prior week, and by about 125% from a year ago (chart via Shanghai Shipping Exchange):

In dollar terms, US imports from China are not so hot.

China’s exports to the US have recovered from the plunge during the lockdowns in China and in the US, powered by a tsunami of orders over the summer from US retailers that were trying to keep up with record retail sales, as stimulus-fed consumers caused sales of durable goods to spike in a historic manner. Retailers are hoping that even more of it will occur going into the holiday shopping season, and they’re stocking up for it. 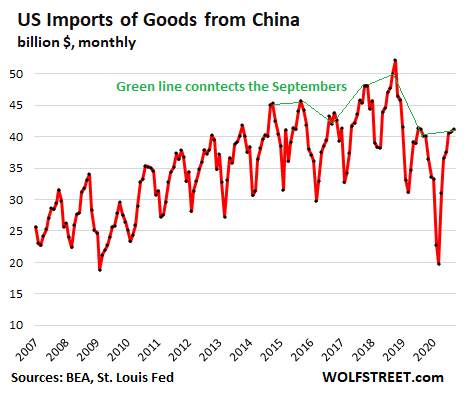 The Port of Los Angeles reported that in September, imports of “loaded” containers (as opposed to “empty” containers, and we’ll get to those in a moment) jumped 17% year-over-year, to 471,794 TEU, after having jumped 18% year-over-year in August, to 516,285 TEU. September and August represent the peak of shipping season. The combined total of those two months reached nearly 1 million TEU, the highest ever for a two-month period. Note the difference between the Financial Crisis and the stimulus-powered Pandemic: 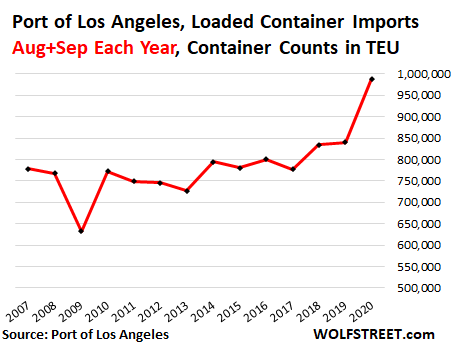 Consumers in the US have got to spend all this stimulus money somewhere, and they’re going to spend it on stuff made in Asia – that’s the bet here.

At all US ports in September, imports of containers jumped by 12.5% to 2.11 million TEU, the highest for any month in the data going back to 2002, eking past the 2.10 million TEU in August, which had been the record before September, according to the Global Port Tracker by the National Retail Federation.

Then there were the cancelled sailings of container ships.

“2020 may come to be referred to as the year of the cancelled sailing,” said a report by Drewry, which provides maritime research and advisory services. Over the seven months from April to October, 150 sailings on transpacific route were cancelled, up 117% from a year ago.

This large reduction in shipping capacity was the “magic sauce,” as Drewry called it, quoting one of its customers, in pushing container freight rates into the stratosphere, as shown by the SCFI. Carriers benefited massively from the surge in freight rates.

Leading to distortions in the container business.

Shippers are groaning under the surging freight rates. And they’re also facing a shortage of empty containers to ship their goods, including lower-value goods such as agricultural and food exports from the US, as shippers of high-value consumer goods in Asia are grabbing every empty container they can get.

“Demand is driven by U.S. consumers who are ordering goods like sports equipment, entertainment devices and furniture,” Nils Haupt, spokesman for German container line Hapag-Lloyd, told the Wall Street Journal. “Ships from China to the U.S. are full and there is high demand for empty boxes in China.”

The Port of Los Angeles exported over twice as many empty containers (276,546 TEU), under red-hot demand from shippers in Asia, than it exported loaded containers (130,396 TEU) – this would be containers loaded with good made in the USA.

The government of South Korea last Thursday called in executives of container carriers to warn them against violating contracts with Korean exporters after complaints that empty boxes had been sent to China due to the higher freight rates carriers get at Chinese ports, according to the WSJ.

The clamoring in Asia for empty containers causes container carriers to hustle the empties back to Asia, thereby putting the squeeze on US exporters of agricultural goods, foods, and the like, which have lower value per container than consumer electronics, furnishings, and the like, and shippers of those high-value consumer goods are willing to bid up freight rates, and carriers are trying to get the empties to them.

US Farmers Struggle to Find Empty Containers for Exports.

Peter Friedmann, executive director at the Agriculture Transportation Coalition, a trade group representing US farmers, told the Wall Street Journal, “Right now we are grappling with a true emergency – carriers refusing bookings for trans-Pacific agricultural exports and canceling those already booked,” he said. “We are getting locked out of foreign markets.”

But hey, no problem as long as US ecommerce retailers can stock their fulfillment centers with Asian-made goods in hopes that consumers, in the weirdest economy ever, will blow their stimulus money on them.

151 comments for “All Container Heck Breaks Loose amid Flood of Orders from US Retailers to Supply Stimulus-Stuffed Consumers, Cancelled Sailings by Carriers, and Record Spiking Freight Rates”