My 13 whiplash-charts by retailer category.

First signs of exhaustion after a blistering Pandemic-inspired weirdest-economy-ever spike to new records? In October, total retail sales – sales of merchandise in stores and online, but not including services such as doctor’s visits, insurance, airline tickets, hotel bookings, etc. – ticked up by just 0.3% from September, the smallest month-to-month increase since the trough in April, eking out a new record of $553 billion (seasonally adjusted), according to the Census Bureau.

Without the boom in online sales, retail sales at brick-and-mortar stores would have been down from September. Compared to October 2019, total retail sales were up 5.7%. The signs of exhaustion show in the details, as we’ll see in a moment. But there are also signs of power-spending particularly by those with money. Ecommerce sales surged to a new record, while department store sales made progress toward ultimate zombiehood: 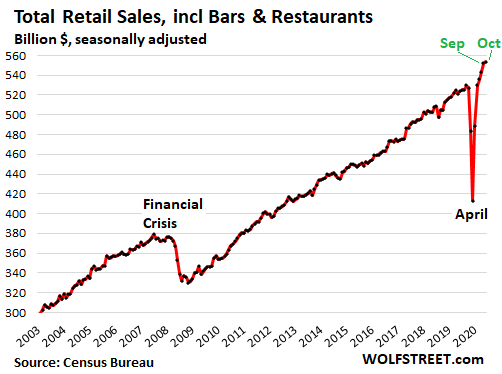 Sales at new & used auto dealers and parts stores ticked up 0.4% in October from September, to $115 billion (seasonally adjusted) and are up 9.5% from October last year.

In July, August, and September, used-vehicle prices spiked by 15%, even as unit sales remained below last year’s numbers. In other words, Americans bought fewer used vehicles but paid more for them. The higher end was white-hot, with pickup truck prices surging 25% in that three-month time frame. It was truly nuts. But in October, price fatigue seems to have set in, and retail prices ticked down a bit.

New vehicle sales, in terms of number of vehicles sold, have now returned to about where they’d been a year ago. But average transaction prices in October jumped 7.3% year-over-year to a new record of $36,755, according to JD Power estimates, as consumers with money or credit are buying more higher-end vehicles such as trucks and SUVs, and fewer cars.

Retail sales, as measured in dollars, at new and used-vehicle dealers and at part dealers, reflect higher prices and a shift to more expensive vehicles. This is the largest category of retail sales, accounting for about 21% of total retail sales, including bars and restaurants: 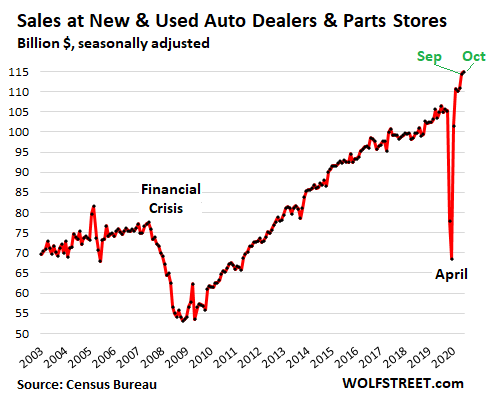 Sales at ecommerce sites and other “non-store retailers” (mail-order operations, stalls, vending machines, etc.) in October jumped 3.1% from September, to $88.2 billion, having spiked 29.1% year-over-year. Ecommerce has become the second-largest category in retail sales, behind auto and parts sales, accounting for 16% of total retail sales. October’s results blow away speculation that ecommerce sales would fall off after brick-and-mortar stores reopened: 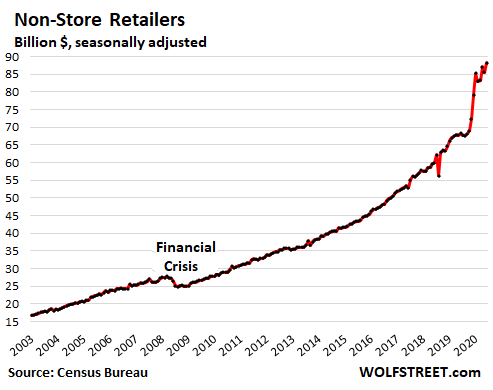 Sales at Food and Beverage Stores edged down 0.2% in October from September, to $70.7 billion, but were still up 10.3% from a year ago. There has been a massive shift in where Americans consume food and household supplies. Work from home has shifted lunches, breakfasts, coffee-before-work, and that liquidity injection after work to households, and thereby to the retail store, and away from restaurants, bars, and cafes and from companies that supply cafeterias and offices. But the panic-buyers’ portion of the spike in March has been unwound: 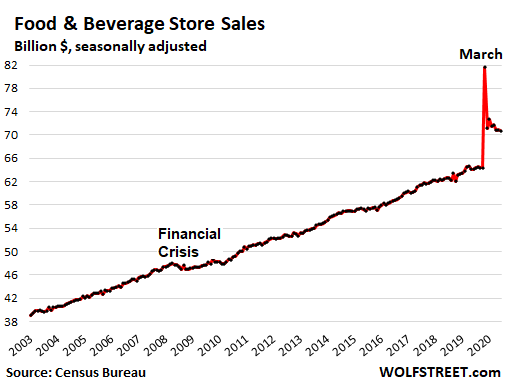 Sales at Restaurants & Bars edged down 0.1% in October from September, to $55.6 billion, down 14% from a year ago. This includes sales at eateries and watering holes of all kinds. Many of them never closed during the Pandemic, such as drive-throughs, but others remain shut down, and many of them permanently, unable to deal with capacity constraints, outdoor-only requirements, and the like. At restaurants that take reservations, foot traffic was still down 44%. Through 2018, this was the second largest category. It is now in seventh place. 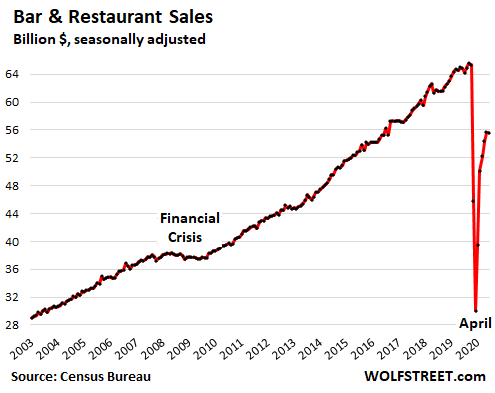 Sales at general merchandise stores (minus department stores) fell 1.1% in October from September, to $51.4 billion, and are up only 2.6% from a year ago, having just about completely unwound the 15% panic-buying spike in March. Walmart, Costco, and Target are in this category, as are many smaller stores. But Walmart’s, Costco’s, and Target’s booming ecommerce sales are not included here but are included in ecommerce sales: 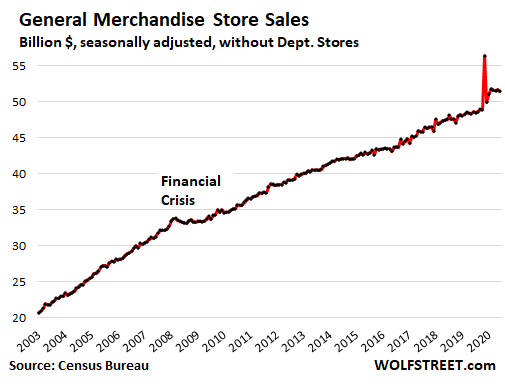 Sales at department stores fell 4.6% in October from September, to just $9.8 billion, and are down 11.9% year-over-year. This does not include ecommerce sales of department store brands, such as Macy’s – the tenth largest ecommerce site in the US, according to eMarketer – which are included in the ecommerce category.

Sales at department stores had been boosted briefly by liquidation sales from store closings and bankruptcies. But they appear to be winding down. Sales are now down 50% from their peak in 2001, having gotten crushed by ecommerce. Department stores have outlived their usefulness. Americans have moved on, abandoning department stores to zombiehood, and mall landlords that still haven’t figured this out will do so over the next few years: 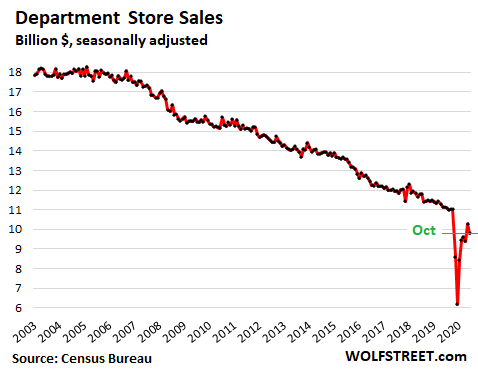 Sales at clothing and accessory stores fell 4.2% in October from September, to $19.4 billion, down 12.6% year-over-year. Even before the Pandemic, sales wandered off to the internet, with Americans figuring out how easy it is to buy clothes online – ah, yes, free returns, just like at the store, but unlike at the store, there is an unlimited selection of brands, styles, sizes, and colors online. Clothing store sales were stagnant for two years before the Pandemic, even as online clothing sales surged. The Pandemic sped up that process. Sales are now back where they’d first been in 2011 and just barely above where they’d been in 2007: 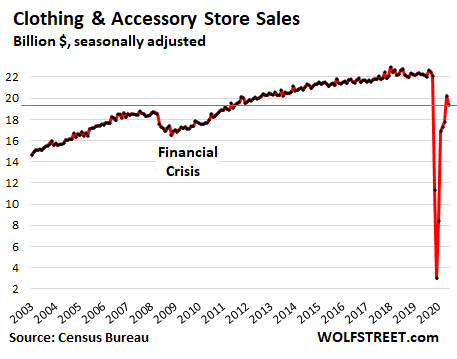 Sales at building materials, garden supply and equipment stores rose 0.9% in October from September, to a new record of $38.1 billion, up 19.5% year-over-year. Home Depot and other big-box stores are included, as are neighborhood hardware stores, garden supply stores, etc. The Pandemic performed miracles for them, with people improving and expanding their homes, decks, and back yards, and planting things, and growing herbs and vegetables and what not, now that they’d be spending a lot more time there, working and vacationing: 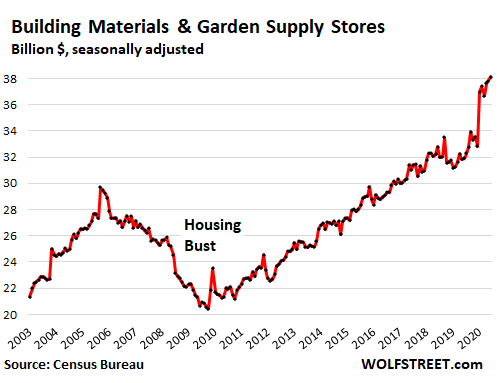 Sales at gas stations edged up 0.4% in October from September, but were still down 14% from a year ago. This includes snacks, drinks, motor oil, and other stuff people buy at gas stations, and where gas stations make much of their money. Sales are impacted by the highly volatile prices of gasoline. The average price of gasoline in October was down 21% year-over-year, according to EIA data: 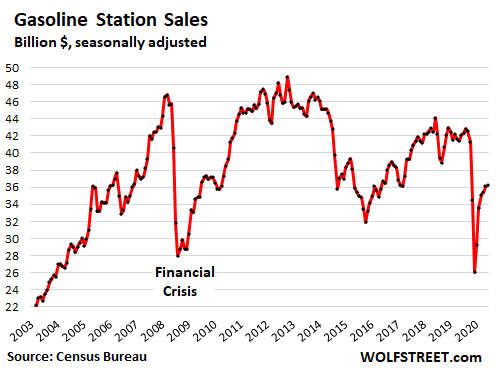 Sales at sporting goods, hobby, book and music stores fell 4.2% in October from September, to $7.6 billion, but are up 12.4% year-over-year. Gyms have been anointed – along with bars and restaurants – as mass-spreader venues. And folks work out at home. The business of Zoom exercise classes, Zoom coaching, and YouTube exercise videos is booming, bicycles are hot, and someone has got to sell the requisite equipment and doodads. This does not include what is sold online, only what is sold at brick-and-mortar stores: 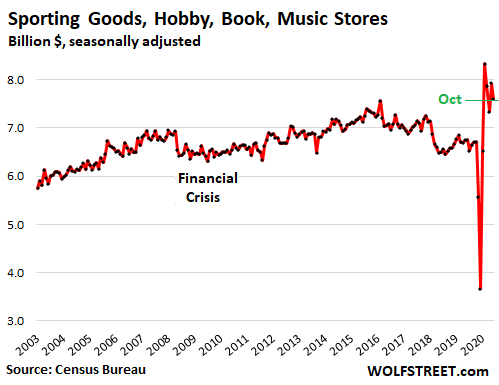 Sales at furniture and home furnishing stores edged down 0.4% in October from the record in September, to $10.4 billion, up 5.2% from a year ago. This merchandise has long been sold in large quantities online, by the online sites of brick-and-mortar operations, by manufacturers directly, by everyone and their dog, including by relative online-only newcomers such as Wayfair, whose sales in the third quarter skyrocketed 66% year-over-year to $3.8 billion. But brick-and-mortar sales in October were up only 8% from the range in 2007. Americans are buying a lot of this stuff, but not at brick-and-mortar stores: 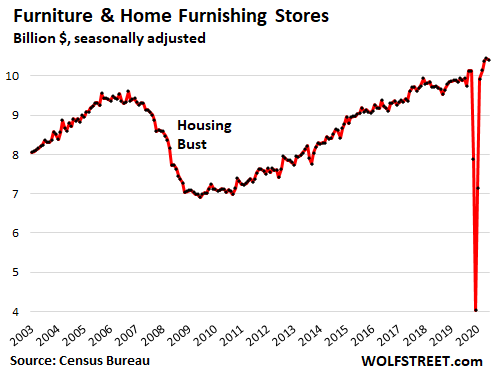 For mall landlords, even the best ones, after years of brick-and-mortar meltdown, there comes the Pandemic. Desperate measures are now required. Read... Why Simon Property Group & Brookfield Property, #1 & #2 Mall Landlords, Bought J.C. Penney and Other Collapsed Retailers out of Bankruptcy