Credit-score algos got fooled by forbearance. Weirdest economy ever where no one knows what’s going on anymore.

So what happens to debt when borrowers stop making payments on their mortgage, credit card debt, auto loan, or student loan, and the lender puts the delinquent loan into forbearance or into a deferral program, and notes the loan as “current,” despite past-due payments, because there is no payment due this month since the loan is now in forbearance? Well, the algo of credit bureaus, such as Equifax, sees that the borrower who was delinquent has “cured” the delinquency and has become “current,” and it then raises the borrower’s credit score. A brave new world, but here we are.

Delinquent loan balances have plunged across all loan types, as these delinquent loans have been moved into forbearance or deferral programs, according to data from the New York Fed’s household credit report for the third quarter.

No Payment, no Problem for Student Loans. 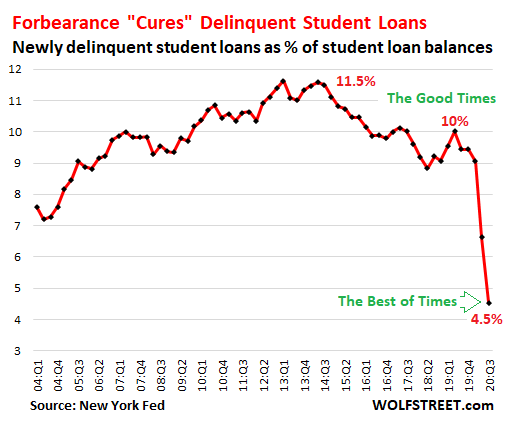 Student loan forbearance – the program also included 0% interest on outstanding balances and cessation of collection efforts – was originally scheduled to end on September 30 but has been extended through December 31. Now among student loan borrowers, the hope of student-loan forgiveness has turned into a feeling of near-certainty, and to heck with the idea of making payments even after the forbearance programs ends.

Auto loans are not backed by the government, and the deferral and forbearance programs have been implemented by private-sector lenders and loan servicers. Newly delinquent auto loan balances dropped to 5.8% of total auto loan balances, the lowest in the data going back to 2003. Note the delinquencies of auto loans during the prior crisis, when they exploded into the double digits. But this crisis now is the Best of Times: 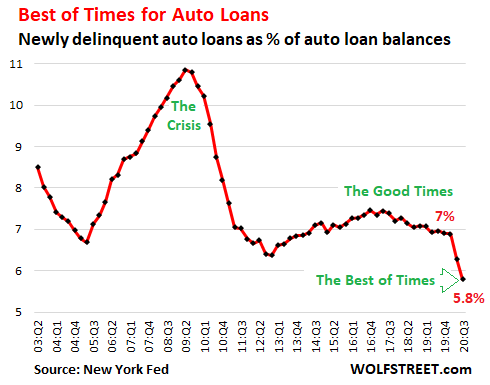 With auto loans there are two factors: Voluntary loan deferral programs by private-sector lenders and government cash sent to households.

In terms of lenders, for example, Ally Financial reported last summer that in its second quarter about 21% of its auto-loan customers were enrolled in its deferral programs where they would not have to make payments for 120 days. The programs ended on September 30. For its third quarter, Ally reported that 8% of the borrowers exiting its deferral programs were 30 days or more delinquent.

In terms of the government cash sent to households, this included the $1,200 per adult and $500 per child in stimulus checks, plus the extra unemployment benefits sent under federal programs, including the extra $600 a week through July, then the extra $300 a week starting in late August, plus the other special federal programs established under the CARES Act, including the Pandemic Unemployment Assistance (PUA) program that has been surrounded by fraud allegations. This government money helped many households keep their auto loans current. 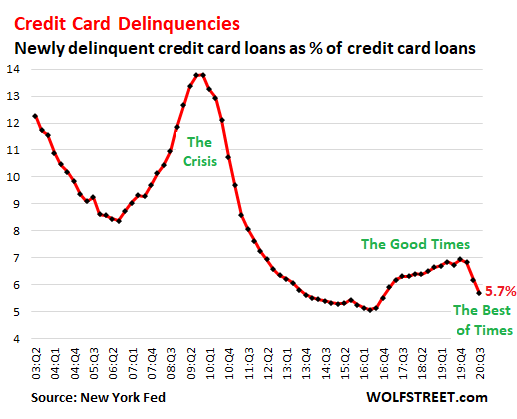 The government guarantees or insures the vast majority of residential mortgages issued in the US, and these mortgages became eligible for forbearance programs under government rules, which provide forbearance for six months, extendable for another six months, so in total for a year. These borrowers can live in their homes without making a payment for one year. When borrowers who have fallen behind on their mortgage enter forbearance, the lender can choose to mark the loan as “current.”  This “cures” the delinquency though no catch-up mortgage payments have been made. Newly delinquent mortgages therefore dropped to a record low of 2.5%, despite the crisis: 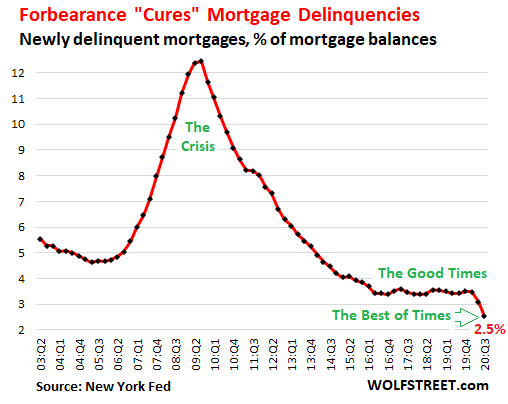 Who are the borrowers seeking forbearance?

The New York Fed looked into which borrowers relied on forbearance to deal with their mortgages and auto loans and found that borrowers that are now in forbearance had lower credit scores and higher outstanding balances in March before forbearance, than had non-forbearance borrowers:

The New York Fed found that for both types of loans, “troubled borrowers were far more likely to opt in to forbearances as evidenced by the higher delinquency rates of participants three months prior to the first forbearance month.”

But then, once the delinquent loans are in forbearance, lenders mark them as “current,” and the delinquency is “cured,” as seen in the charts above, which the New York Fed also noted.

The New York Fed found that, “On average, delinquent borrowers whose loans were converted to ‘current’ upon entry into forbearance saw an average 48-point increase in their credit scores (here, Equifax Risk Score 3.0).”

But for borrowers who were not delinquent when they entered forbearance, their credit score was unchanged.

Yup, the algos that Equifax and others use to arrive at their credit scores, and that lenders rely on when they extend new loans, got fooled, and these algos improved the credit scores of borrowers whose delinquent loans moved into forbearance while they did not change the credit scores of borrowers who were not delinquent. Just another distortion in the Weirdest Economy Ever, powered by government-sponsored loan deferments and government stimulus payments, where in the end no one really knows what’s going on anymore.

141 comments for “No Payment, No Problem: In Rosy World of Forbearance, Official Delinquencies Plunge, Credit Scores of Delinquent Borrowers Jump”