San Francisco rents plunged by stunning 27% in 18 months. But in 5 big cities, rents jumped by 20%+. But in some of the cheapest cities, rents dropped.

The rent drama in the US is displaying what is happening in the working world: massive shifts are under way, powered by work-from-home which has turned into work-from-anywhere, and other factors. Rents are responding to the ebbs and flows of the people.

San Francisco rents, the most expensive in the US, in a stunning downward spiral.

The median asking rent for one-bedroom apartments in San Francisco fell by another 3.6% in November from October, to $2,700, bringing the plunge since April to $800 or 23%, according to data from Zumper’s Rent Report. From the peak in June 2019, one-bedroom asking rents have now plunged by 27%, or by $1,020 per month: 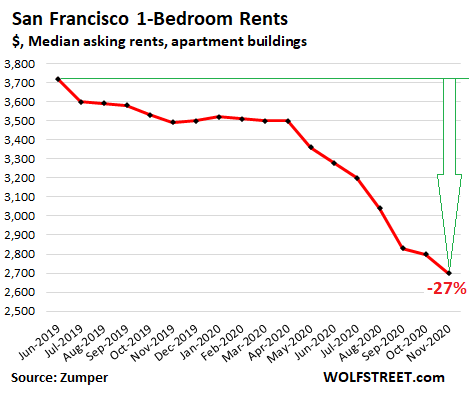 During the dotcom bust, there was a similar plunge in rents – but it took three years. Measured by a combination of different data sets by Patrick Carlisle, Chief Market Analyst at Compass in San Francisco (rents, unlike home prices, are not universally tracked), the average asking rent plunged by 25% from Q1 2001 through Q1 2004, which was the bottom. Now San Francisco has passed the point, but it has done so in just 17 months.

This median 2-BR asking rent has now dropped below where the 1-BR asking rent had been in June last year. In other words, people that signed a lease for a median 1-BR apartment in June 2019 could now sign a lease for a median 2-BR, and save money. The free upgrade! And lots of renters are now chasing after the free upgrades, amid a huge number of vacancies.

Zillow lists 3,735 rentals in the City at the moment. That’s more than double the 1,851 listings in May 2018 and more than triple the 1,149 listings in August 2016. There is lots of choice for renters seeking a “free upgrade” or a cost cut. And this choice – the sheer availability – is causing churn, with people moving from one place to another, just to get a better deal.

And the churn is huge: One indication is the number of change-of-address requests that the US Postal Service receives. From March 1 through November 1, the USPS received 124,131 change-of-address requests originating in San Francisco zip codes, according to USPS data obtained by Public Comment. About 34,000 (28%) of those requests were for new addresses within San Francisco – and a portion of them were people looking for that “free upgrade.”

But around 89,000 of the requests were for addresses outside San Francisco, some within the Bay Area, others far afield, indicating roughly how many people left the City.

Some people also moved into the City during this time, but with travel restrictions in place, particularly between San Francisco and other countries, and with working-from-home or working-from-anywhere being the rule in the City, the influx was likely slim. So, rents plunge.

Despite these dynamics and the plunge in rents, San Francisco remains the most ludicrously expensive rental market in the US, largely because rents in New York City, the second most expensive market, are dropping in near-parallel.

These median asking rents here do not include concessions, such as “two months free” or “three months free” that landlords use to entice potential tenants with lower effective rents – getting 15 months for the price of 12 months – while being able to show their lenders the higher nominal rents. 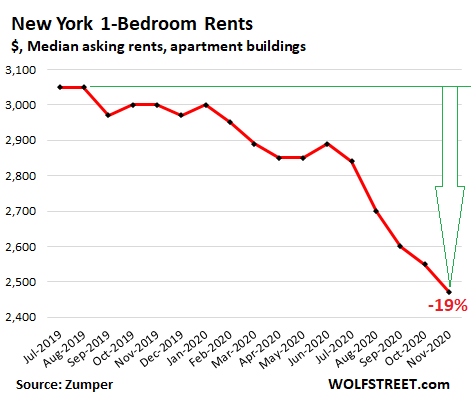 These rent declines are explained by the exodus from apartment towers, largely in Manhattan. And the numbers can be stunning. For example, the occupancy rate at the iconic “New York by Gehry” 76-story tower in Manhattan with 899 apartments plunged from 98% in 2019 to just 74% by September 2020, with roughly 234 units suddenly vacant, which shows how fast and massive the exodus has been!

“Median” asking rent is the middle, half of the rents are higher and half are lower. “Asking rent” is the advertised rent of apartments for rent, but does not include concessions.

Zumper collects this data from the Multiple Listings Service (MLS) and other listings, including its own listings, in the 100 largest markets of the US. The data tracks rentals in apartment buildings, including new construction, but doesn’t track single-family houses for rent and condos for rent.

The table below shows the most expensive major rental markets by median asking rents. The shaded area shows peak rent and the changes from peak rent. The black entries in the shaded area indicate rent records set in November. Note the 13 double-digit drops among 1-BR rents from their respective peaks, of the 17 entries: 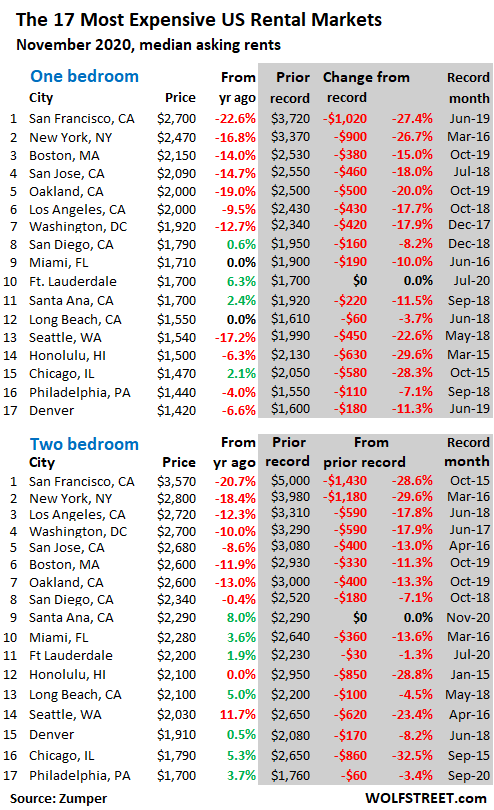 While rents are spiraling down in some cities, including some of the already cheapest rental markets in the middle of the country (for example, Akron, Wichita, or Tulsa), in other cities rents are exploding higher, largely driven by the sudden shifts brought on by “work from anywhere,” with people leaving some places and storming into other places. And in other cities, rents are not moving much at all.

The 30 Cities were rents dropped.

The median asking rent in November for 1-BR apartments fell in 30 of the largest rental markets, compared to rents in November 2019. In 19 of those markets, rents fell by 5% or more year-over-year, topped by double-digit declines in the usual suspects, plus in a couple of new suspects, Buffalo and formerly red-hot Nashville. The Oil Patch also has a number of cities on this list.

And it’s not just the expensive markets were rents are dropping, but also in some of the cheapest, including Akron, Wichita, and Tulsa:

The 25 cities with the Cheapest 1-BR rents:

In one quarter of the largest rental markets, the median asking rent for 1-BR apartments was $850 or below. These are the lowest-cost cities to rent in among the 100 biggest markets, and some nice cities too, and they would be great for some folks that are now working from home.

The table below shows the top 100 cities, with 1-BR and 2-BR median asking rents in November, in order of 1-BR rents from most expensive to least expensive. It also shows year-over-year percent changes in rents. You can search the list via the search function in your browser. If your smartphone clips this 6-column table on the right, hold your device in landscape position: