Office occupancy plunged by the most in Dallas. In San Francisco, where it had already been rock-bottom, it dipped into the single digits. 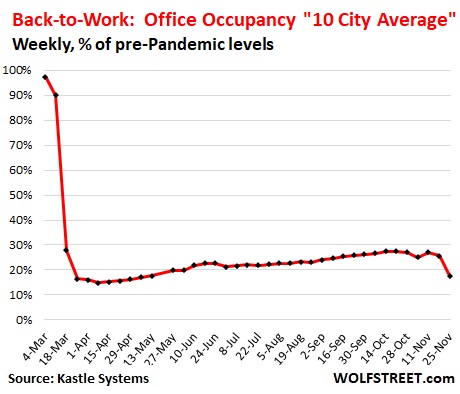 This data is not primarily a measure of employment – though it also captures layoffs – but a measure of the impact of work-from-home on office occupancy. For example, instead of 1,000 people working in a particular office building as they did before the Pandemic, fewer than 200 people might be working in that building now, with the remainder working remotely and a few having gotten laid off.

Kastle’s “Back to Work Barometer” for the 10 largest metros – the chart below – tracks in percentage terms how daily office occupancy has developed since before the Pandemic. The green lines depict the metros with the highest office occupancy rates.

The office occupancy rate in Dallas had been over 40% in recent weeks, meaning that occupancy was still down by nearly 60% from pre-Pandemic levels, but that was the best of the 10 metros. It’s at the top metros – Dallas, Houston, and Austin – where the occupancy rates have plunged by the most in the week through November 25 from the prior week, with the occupancy rate in Dallas plunging by over one-third, from 40.3% in the prior week, to 24.2% in the week through November 25 (chart via Kastle Systems, click to enlarge): 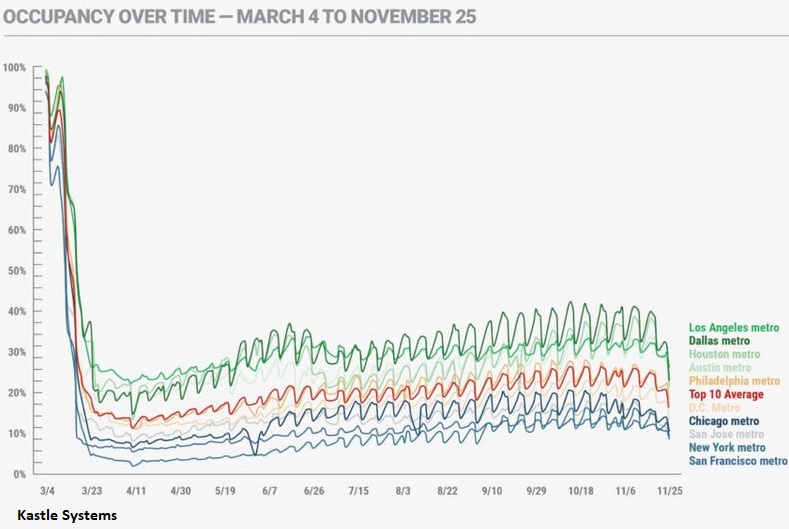 Now San Francisco’s Financial District has died down further. This is tragic for the small businesses in the ground-level spaces, the restaurants and cafés, the gyms, barbershops and hair salons and retailers. Customers have evaporated. Many of these businesses have thrown in the towel. Landlords are in a holding pattern. It doesn’t even make sense to put up a vacancy sign.

At the edge of San Francisco’s Financial District is the Embarcadero Center – five office towers, two hotels, and a shopping center that once had over 125 stores and restaurants, a gym, and some movie theaters. The shopping center is essentially dead and the movie theaters remain “closed till further notice.”

But in San Francisco’s parks, particularly along the Bay, there are lots of people – a lot more than before, according to my own observations. They’re exercising, playing with their kids, sitting out in the sun, strolling. So there is life in the City. But it’s not in office towers. Many of these people are taking a break from working at home to get out of the house for a while and get away from the computer and from Zoom meetings and clear their head and perhaps meet up with some friends or colleagues. But office buildings – and the commerce that depends on them – have become near-lifeless.

The iconic “New York by Gehry” 76-story tower in Manhattan with 899 apartments had an occupancy rate of 98% in 2019. By September 2020, the occupancy rate had plunged to 74%. Roughly 234 units of the 899 units were suddenly vacant! Read… Vacancy Rate at Iconic Manhattan Tower with 899 Apartments Hits 26%: This Shows How Fast & Massive the Exodus Has Been

134 comments for “The State of the American Office: Suddenly Emptying Out Again Under the Second Wave”