Never a dull moment in the land of consumer stimulus and heavy trucks.

Boom and bust cycles are guaranteed in this business. And now, this is the Weirdest Economy Ever, powered by the $3 trillion the Fed threw at the markets, and by $3 trillion in government stimulus and bailout spending, and by a huge shift to work-from-home and learning-at-home that required all kinds of spending on laptops, network equipment, office chairs, desks, and, well, hot-tubs, and powered also by huge shifts on what consumers actually spent their money on.

Spending shifted from services, such as plane tickets, hotels, gyms, haircuts, manicures, rent (encouraged by eviction bans), and mortgage payments (made possible by forbearance), to stuff. And ecommerce is booming, and this stuff needs to be transported, much of it from overseas, and so imports are booming, and all this stuff has to then be shipped by truck or rail, and so all heck has broken loose in the container shipping business.

Trucking companies, which had cut their equipment orders to the bone during the two-year-long freight recession, are now grappling with the notion of equipment shortages. And by September, they were ordering large numbers of class-8 trucks that haul the goods across America. And in November, orders for class 8 trucks exploded to 52,600 orders, according to FTR Transportation Intelligence, matching the prior two historic records of July and August 2018: 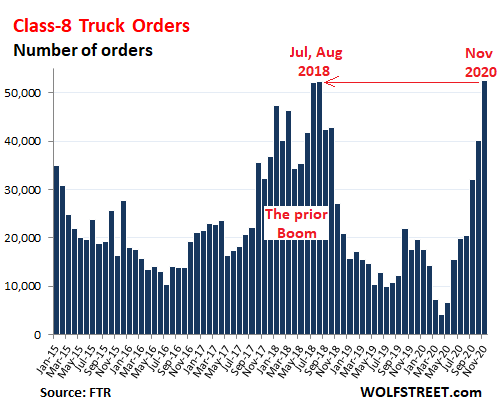 “The tremendous volume reflects several large fleets placing their requirement orders for the entirety of 2021 to lock up build slots, which they perceive could be in short supply next year,” FTR said in the note.

Truckers are dealing with the current flood of consumer-oriented freight. And they expect the industrial-oriented freight, which is still lagging, to hopefully pick up soon.

“Fleets are placing big orders anticipating needing more trucks throughout next year,” FTR said. This boom in orders was triple the number of orders in November last year, the biggest year-over-year percentage gain (199%) in years. This chart of percentage changes from the same month a year earlier also depicts the whiplash-inducing boom-and-bust nature of the industry: 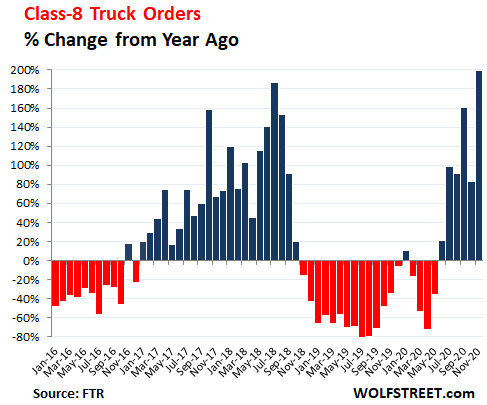 Throughout the freight recession and the ensuing plunge in orders for heavy trucks that started in November 2018, truck manufacturers have been eating through what was in mid-2018 a record backlog that then became very thin. Truck manufacturers responded with plant closings and layoffs, as hundreds of trucking companies, including some large ones, collapsed into bankruptcy. But that is like so 2019 and early 2020. Now is the boom.

“The huge November orders mean that Q4 will be a fabulous one, regardless of what comes in for December, and that portends well for the expected increase in production early next year,” said FTR’s VP of commercial vehicles, Don Ake.

But this stimulus money that arrived in consumer bank accounts or was used to pay down credit cards is starting to run low, and there are already signs that consumers have tapered their splurging on goods.

And now everyone is praying for more stimulus money with which consumers will buy more goods that have to be, or already have been, imported from China, Mexico, Germany, and other countries, so that they will have to be transported from ports to warehouses and fulfillment centers around the country, and from there to consumers and brick-and-mortar stores. Because without new stimulus, consumers — millions of them still without jobs — might just refuse to prop up on their own the Weirdest Economy Ever.

Stimulus and extra unemployment insurance dried up. But 16% of “proprietors’ income” in October was PPP money & Pandemic farm aid, and that too is drying up. Read... The State of the American Consumer: Free Pandemic-Money Runs Low