Five reasons to “worry about faster inflation.” It’s “a greater danger precisely because it’s no longer perceived as such.”

“Given how completely financial markets have come to expect low inflation and interest rates, and how much support those expectations are providing to bond and stock prices, an upside surprise could prove nasty,” says former president of the Federal Reserve Bank of New York Bill Dudley, in a warning about how markets are ignoring the rising risks of inflation.

Companies have been raising prices, and they have been getting away with it. I’m not talking about prices at the gas station or grocery store which bounce up and down, but prices for things that are more stable, particularly services, where 70% of spending takes place, such as broadband services, shipping rates, and the regular highflyers, such as healthcare. Rents on a national basis are mix of plunging rents in some cities and surging rents in other cities. There has been inflation in goods too, including used-vehicle prices which have spiked by 15% since June,

Many of the restaurants that remained open raised their prices to deal with the additional costs and the decline in seating capacity during the Pandemic, and people are willing to pay those prices to support their restaurants. This happened across other industries that have cut capacity, triggering surging prices despite a decline in demand.

Companies themselves are now reporting surging prices-paid in their part of the economy. This is particularly the case with services-oriented companies, where most of the economic action takes place. They’d only experienced a brief pause in price growth in March, and prices didn’t actually drop – they just stopped rising. But in April, prices took off. And for November, the ISM Services PMI for prices paid jumped to 66.1 (values above 50 indicate rising prices compared to the prior month, a higher value means prices rose faster). It was the eighth month in a row of price increases (above 50). And it matched the two sharpest month-to-month price increases since 2011. 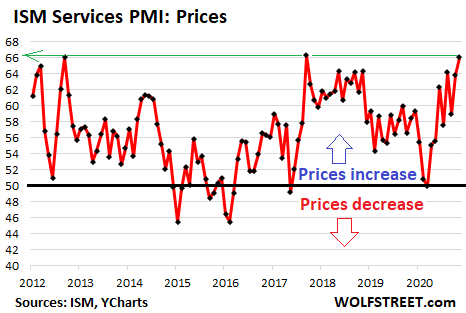 These are prices paid – the costs of these companies are rising and are pressuring their margins, and they’ll want to pass those higher costs on to the next one in line.

But neither consumers nor markets see inflation. Least of all the Fed.

In surveys, consumers remain calm about future inflation, though they face higher prices every day. Treasury market metrics of inflation are somnolent as well about the potential of future inflation. And Fed officials, in their Economic Projections, don’t see inflation (as measured by core PCE) reaching 2% until 2023.

So now, Bill Dudley is stirring the pot with an editorial on Bloomberg: “All told, inflation might be a greater danger precisely because it’s no longer perceived as such,” he says.

“And given how completely financial markets have come to expect low inflation and interest rates, and how much support those expectations are providing to bond and stock prices, an upside surprise could prove nasty,” he said.

After April 2021, the low comparison basis of April 2020. Inflation had dipped in March and April by 0.5%.  But since April, the core PCE price index that the Fed uses has already risen by 1.3%. Next April and going forward, the low points of 2020 “will become the new basis for comparison, and year-over-year measures of inflation will jump,” Dudley says.

Consumer spending pattern shift back to normal after vaccines. Consumer spending has been upended and distorted during the Pandemic, with spending on some goods and services surging to new records, while many other service providers, such as the travel industry and restaurants and bars and hair salons, got crushed. In the second half of 2021, assuming that the vaccines are functioning, people will start doing the things they’d stopped doing, including more travel, and these industries “will probably regain pricing power as demand recovers.”

“Sharp price increases might even be needed to balance demand with the available supply, which the pandemic has undoubtedly diminished,” he says. Think capacity cuts among airlines, hotel and restaurant closures, and the like. If there is more demand, it will meet with capacity constraints, and companies will jack up prices.

These price increases “are unlikely to be offset by price decreases in areas that probably will see less demand, such as online streaming (Netflix) and videoconferencing (Zoom),” he writes.

Lacking or misallocated capital investment. “When the crisis period ends, capital will not be allocated to its most productive uses: Many expansion projects and investments have been suspended and new demand patterns will likely emerge post-pandemic,” Dudley says.

And then there’s the issue that the hardest hit sectors – restaurants, airlines, etc. – have shed the most employees, and those workers have moved on, “making it difficult for businesses to find the labor needed to expand. Some businesses, such as restaurants, will simply have disappeared, reducing the capacity available to meet resurgent demand.”

The Fed will let inflation run hot. The Fed has switched from a target of 2% inflation – meaning not more, not less – to a goal of an undefined average of 2% inflation, with periods of above-2% inflation to make up for periods of below-2% inflation. “This means they’re unlikely to respond to any inflation uptick until they expect it to be both persistent and sizable,” he says.

“Fiscal orthodoxy has shifted” – more deficit spending. There has been a huge policy shift toward big fiscal deficits, starting with massive tax cuts two years ago, which caused the federal deficit to blow out even during the Good Times, followed by the massive Pandemic spending, which caused the deficit to explode. And it appears that there are at the moment not a lot of concerns about the deficit and debt in Congress, as “fiscal orthodoxy has shifted.”

As a result, “the government is much more likely than it used to be to support the economy with added spending” to offset shortfalls in demand. And “the government probably won’t want to remove fiscal stimulus as quickly as it did after the 2008 financial crisis (a move that led to a disappointingly slow recovery).”

There is a chance, however, that Republicans in Congress will become instant deficit hawks once again the moment their guy leaves the White House. And if they retain control over the Senate, they could stifle those fiscal stimulus efforts. A possibility that Dudley sees as well.

So he concludes that “inflation might be a greater danger precisely because it’s no longer perceived as such.” And that for stock and bond prices, this “could prove nasty.”

Well, OK then. Another warning about asset prices, on top of a pile of warnings about asset prices. And so far, markets have blown them all off. Which seems to be precisely what Dudley is getting nervous about.

129 comments for “For Stocks & Bonds, Upside Surprise of Inflation and Interest Rates “Could Prove Nasty”: Dudley”