Never mind the Pandemic or the huge blob of corporate debt that even the Fed publicly fretted about before the Pandemic, only to do everything it could to fatten up this huge blob of corporate debt even further during the Pandemic. And never mind the credit risks – the risk of default and bankruptcy – that this corporate debt poses. And never mind that entire over-indebted industries saw their revenues collapse. Come to mind airlines, cruise lines, mall retailers, mall landlords, restaurant chains, hotels, hotel landlords, movie theater chains, or of course the entire shale oil-and-gas sector. And just don’t worry about the risk of inflation and the existence of inflation. Just never mind any of this, because, I mean, it just doesn’t matter: Junk bond yields have dropped to a record low.

To wit: the effective yield of the ICE BofA US High Yield Index, which tracks US-traded junk bonds across the junk-bond spectrum, fell to 4.61% at the close on December 3, the lowest in history. As bond yields fall, bond prices rise: 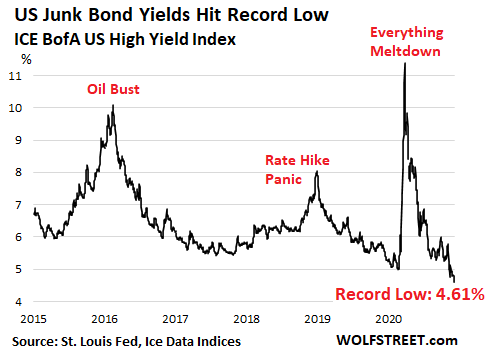 The surge in yields back in 2015 and 2016 was largely the result of the shale oil-and-gas industry getting ripped apart by the Great American Oil Bust. The price of WTI crude oil had plunged from $110 a barrel in mid-2014 to below $30 a barrel in early 2016, triggering a wave of defaults and bankruptcies. The Fed, which had just started raising rates in December 2015 with its first tiny rate hike in a decade, started worrying about contagion and halted the rate hikes for a whole year, during which the junk-bond market began to settle down.

Then in 2018, as the Fed was raising interest rates and unwinding QE, junk bonds started quaking in their boots again. The headliners were the brick-and-mortar retailer meltdown, the oil-and-gas sector, media companies, and lots of others that just had too much debt. Yields spiked in mid-December, when the Fed raised rates despite hopes that it would back off. But then the Fed also started backing off its guidance for rate hikes in 2019, and in July 2019, it embarked on rate cuts, and the junk-bond turmoil settled down.

In September 2019, another corner of the credit market blew up, this time the repo market, and the Fed piled into repurchase agreements, in addition to another rate cut, to keep some big mortgage REITs and hedge funds that had massively borrowed in the repo market from imploding and spreading messy stuff around Wall Street. But the repo market blowout had not impacted the junk bond market, which watched from a distance. And by early 2020, junk-bond yields were in record-low territory.

Then in March 2020, the Everything Meltdown caused junk bond yields to spike, with the ICE BofA High Yield Index more than doubling in a month, from a record low yield of 5.02% on February 20th to 11.38% on March 23rd.

And the Fed threw everything it had at it to bail out the investors and speculators holding those bonds. This included a purchase program of corporate bonds and bond-ETFs, including junk bonds and junk ETFs, that had been touted as a $700-billion program, when in fact, the Fed ended up buying just $13 billion in corporate bonds and bond ETFs. It stopped buying ETFs in July and has been buying just a trickle of bonds. The program is set to expire at the end of December.

So the junk-bond market goes from blow-up to Fed bailout to blow-up to Fed bailout. This goes back further. During the Financial Crisis, the junk bond market blew out royally, and froze up, and the Fed unleashed all its fury to settle it down, which included numerous bailout programs – an entire alphabet soup of programs – and years of QE. The chart below shows the longer-term perspective of the ICE BofA High Yield Index: 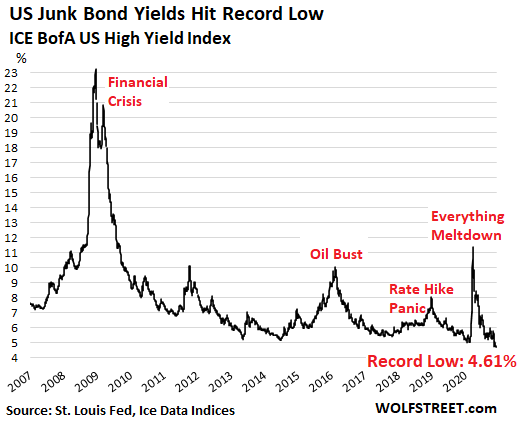 Every time the Fed bails out the credit markets – and the investors that hold and trade that paper, and that speculate with that paper often in highly leveraged complex trades – it causes more corporate debt to be built up. Instead of allowing corporate debt to be shed via bankruptcies and debt restructurings, at the expense of those investors, traders, and speculators, the Fed is creating an environment of free money that exhorts companies to borrow even more. And then the even greater debt hangover bogs down the economy during the Good Time while everyone is waiting for the next blowup so that the Fed would rescue them again, turning the whole thing into a Fed-managed paper exchange.