Retail prices of used cars & trucks spiked most since 1969 despite lower sales and plenty of supply. Wholesale prices, after biggest spike ever, are already falling.

Prices of used cars and trucks have been on one heck of a crazy ride since the Pandemic started, with the market freezing up in March and April, and then heating up, with prices soaring but with demand and sales volume still not back where it was before the Pandemic. This – what would normally be contradictions – makes you shake your head.

Retail prices of used cars and trucks in September soared 6.7% from August, the biggest month-to-month jump since February 1969, according to the Consumer Price Index for September, released today by the Bureau of Labor Statistics.

This brought the three-month jump (July, August, September) to 15.1%. I checked the data back to 1984, and this was by far the biggest three-month jump. Even during the Cash-for-Clunkers program – when a whole generation of serviceable and affordable used vehicles were taken out the back and summarily shot to boost new vehicle sales during the Financial Crisis – the three-month price increases topped out at 9.2% at the end of 2009: 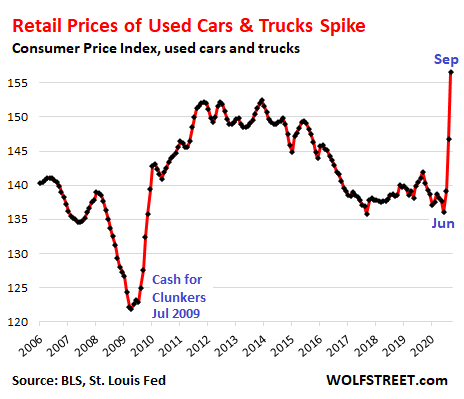 And what’s even weirder is that this three-month record-breaking blistering-red-hot increase of the CPI for used vehicles occurred even though used vehicle retail sales volume in those three months remained below the levels a year earlier, according to estimates by Cox Automotive.

But wholesale prices have turned the corner.

A few days ago, we looked at used vehicle wholesale prices – based on industry data, not government data. The entire used vehicle wholesale market has been on a roller-coaster ride where auction prices in late spring and summer spiked into the stratosphere in a manner never seen before, with wholesale prices of pickup trucks skyrocketing an astounding 26% from a year ago, according to J.D. Power. But then prices topped out in August. On a weekly basis through early October, wholesale prices have declined nearly 5%, though they still remain above Pandemic levels.

There is plenty of supply – with rental car companies now trying to defleet, as their airport business is still just a small fraction of what it used to be.

The vehicles that Hertz was trying to unload were stuck in bankruptcy court for the summer, but a settlement with creditors was reached at the end of July, and then in August, some of those 200,000 or so vehicles started heading toward the auctions. The plan is to sell all of them by year-end. The arrival of the Hertz units in August may have been one of the reasons for the downward move in prices starting in late August.

Wholesale supply was 26 days at the end of September, higher than the normal 23 days, according to Cox Automotive. This supply does not include vehicles that are sitting on a lot at a rental car company or leasing company, waiting to be sent to auction. And there is a lot of that.

When will the decline in wholesale prices show up in used-vehicle CPI?

Wholesale prices started losing steam, on a weekly basis in late August, and on a monthly basis, in September. So if the lag remains roughly the same (two months), we might see the first declines in the used vehicle CPI in November.

There is plenty of retail supply on average across the US.

At the end of September, there were 42 days’ supply on dealer lots, just a tad lower than average (44 days), according to Cox Automotive estimates for dealers across the US.

What you will find when you shop at dealers in your area is another story that might not match national averages, depending on numerous factors, including how much competition there is, what the dealer is willing to do, and what vehicle you’re looking for. What you will find may range from over-abundance to shortage. And this will also impact pricing.

So keep your eyes open and shop around. These are truly crazy times, not only for consumers looking for a deal on a used vehicle, but also for dealers struggling to make sense of these historic distortions.