This stimulus economy is producing the weirdest effects.

This has been an amazing sight: The used vehicle auction market’s descent into the deep-freeze during March and April, in terms of volume and prices, and then the phenomenal spike in prices into the summer, and the reversal starting in late August and accelerating in September and early October.

In the week ended October 4, auction prices for vehicles up to eight years old declined 1.2% from the prior week, the seventh week in a row of price declines, according to J.D. Power data, released this afternoon. Its weekly price index is now down 4.8% from the peak of the price spike in mid-August, but remains substantially above pre-Pandemic levels:

From a different and long-term point of view, the monthly Manheim Used Vehicle Value Index, which tracks auction prices and is mix-, mileage-, and seasonally adjusted, fell in September after a magnificent spike over the summer.

A month ago, in its August release, Manheim, the largest auto auction house in the US and a unit of Cox Automotive, had noted that values were rising at a “decelerating pace” in the first part of August and then began backtracking in late August. In September the index fell 1.6% from August, but is still up 15% from a year ago – a stunning historic collapse-and-spike: 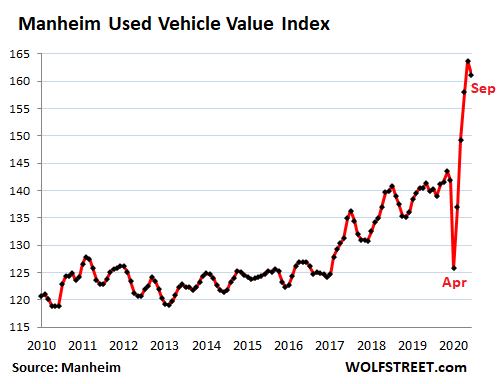 In terms of Manheim’s “Three-Year-Old Index,” it fell 2.9% in September. Manheim Market Report (MMR) prices fell at “an accelerating pace over the four full weeks of September”; in the last full week of September, it declined 0.9%, “the biggest weekly decline in 22 weeks.”

The chart below, via Manheim’s October Presentation, depicts the Three-Year-Old Index for past years, and in bold purple for 2020, in terms of how prices changed from week 1 of each year (=100%), with prices generally declining later in the year. But 2020 has been a spectacular outlier, though the decline now too has set in: 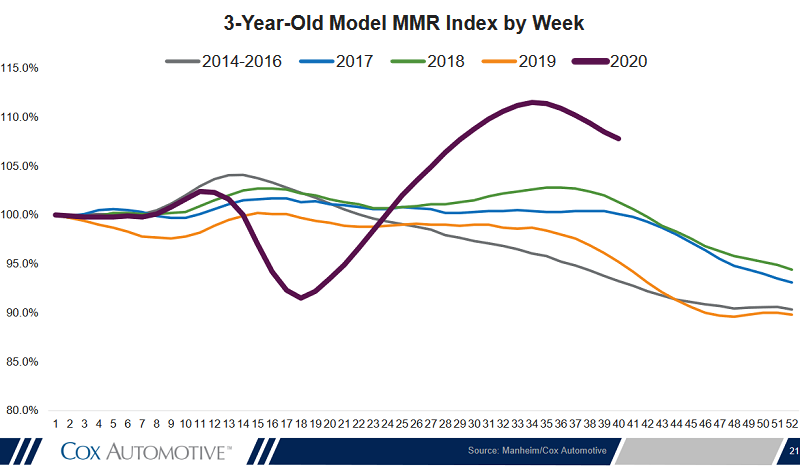 As a sign of our times, Manheim reported that at its auctions, 87% of the vehicles were purchased on its digital auction platforms – “Dealers are choosing digital over physical,” it said. And overall auction attendance, fired up by the surge on its digital platform, has grown by 5% from the pre-Pandemic weeks in 2020 to an average of 87,900 per week in weeks 22-29.

But the beginnings of recent price declines are no match at this point for the price spikes in prior months. All major vehicle categories showed year-over-year price increases in September. Used pickups have been red-hot for months and on a year-over-year basis, were up nearly 26% compared to September last year – astounding price distortions! 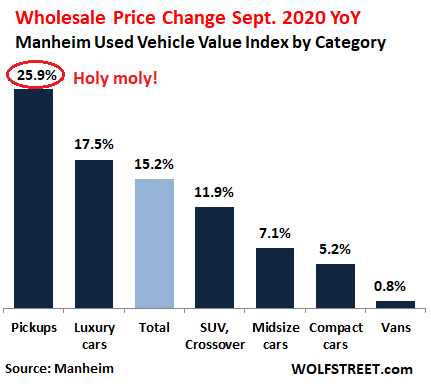 During the Good Times, in an average week, over 110,000 vehicles up to eight years old were sold at auctions around the country, according to data by J.D. Power, a market research company focused on the auto industry. These auctions are where vehicles from rental car companies, leasing companies, other fleets, repossession companies, and the like are sold to auto dealers. The wholesale market underpins not only the used vehicle retail business but also the new vehicle retail business.

During the worst week in April, volume collapsed to just 18,000 vehicles and dragged prices down with it. And then auction volume and prices whiplashed the other way. Prices continued to spike into August, but weekly auction volumes began tapering off in late June and have since been substantially below pre-Pandemic levels: 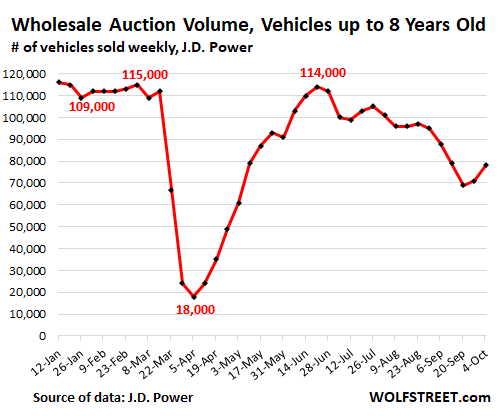 This turmoil in the wholesale market is happening even as used vehicle retail sales by auto dealers following the freeze in March and April have not yet come back to last year’s level. In September, at a seasonally adjusted annual rate (SAAR) of 20.2 million vehicles, sales were still down 2.5% from September last year, according to estimates by Cox Automotive, after having been down about 2% year-over-year in August.

So it’s not really sudden pent-up demand on the retail side since retail sales are still trying to claw back to pre-Pandemic levels and haven’t quite gotten there yet. The pent-up demand and stunning overshoot in prices occurred on the wholesales side.

Some of the wholesale pricing craziness over the spring and summer has been filtering into used vehicle retail prices. Even the Bureau of Labor Statistics, which produces the infamous Consumer Price Index, came up with a stunner.

First, I want to point out that its CPI for used vehicles in June, despite some fluctuations over the years, was still flat with 2003 though used vehicle prices might have surged 50% over the period. How this disconnect also happened with new vehicles is explained by my F-150 Pickup and Camry Price Index which totally crushed the CPI for new vehicles.

But in its latest CPI report, the Bureau of Labor Statistics said that used vehicle prices in August soared by 7.4% since June, the largest two-month price spike in the data as far as I could see going back to the 1990s.