Will Social Security Be There for You? Yes, but…

The Social Security Trust Fund – officially the Old-Age and Survivors Insurance (OASI) Trust Fund – closed the fiscal year 2020 at the end of September with a balance of $2.81 trillion, the second highest fiscal-year close, behind 2017, up by $6.8 billion from a year ago, and up by $10 billion from two years ago, according to figures released by the Social Security Administration. The Trust Fund has vacillated in the same range since 2016, after growing substantially over the past decade.

The Trust Fund invests exclusively in special issue Treasury securities, of two types: $2.797 trillion in interest-bearing long-term special issue Treasury securities and $14 billion in a short-term cash management security, called “certificates of indebtedness.” These securities are not publicly traded, and so their value doesn’t change from day to day with the whims of the market. The Trust Fund purchases them at face value, and the US Treasury redeems them at face value.

By contrast, a bond mutual fund that holds marketable Treasury securities must “mark to market” its Treasuries on a daily basis (producing a gain or loss).

By investing exclusively in Treasury securities that are not exposed to market whims, the Trust Fund follows the most conservative – meaning, low-risk – strategy possible.

According to the 2020 Trustee Report, 54 million people drew Social Security retirement benefits at the end of 2019:

The Disability Insurance (DI) Trust Fund is separate from the OASI Trust Fund, and is not part of this discussion here. But just to note: In 2019, it paid benefits to 10 million disabled workers and dependents of disabled workers.

During 2019, 178 million people paid into Social Security via payroll taxes. These contributions, together with interest income from the securities, generated income of $1,062 billion. Total costs of the program were $1,059 billion. A $3 billion surplus. That was for fiscal 2019.

The Trustee Report for fiscal 2020 – the 2021 Trustee Report – is not yet available, but we know already that the Trust Fund grew by $6.8 billion this year. So far so good.

For now, the Trust Fund is benefiting from millennials having entered the workforce and gaining earnings power as they move up in their jobs. But there is also the drag on the Fund of the boomers who’re now between 55 and 75 and are transitioning into retirement in ever larger numbers. For the past few years, the equation has been in balance – with millennials and boomers being both huge generations. But it will gradually change, and when it does, it will show up as a downward slope to the line in the chart above.

The effective interest rate earned by the securities in the Trust Fund has been declining for years, particularly after the Financial Crisis, when the Fed used QE to force down long-term interest rates. And the Fed’s current interest rate repression will show up as lower interest income in future years.

In September, the weighted average interest rate earned on the securities was 2.53%, still higher than current Treasury yields, thanks to long-term securities that carry the higher interest rates of yore. But since 2009, it has fallen by about half. And at current interest rate policies, the declines will continue. 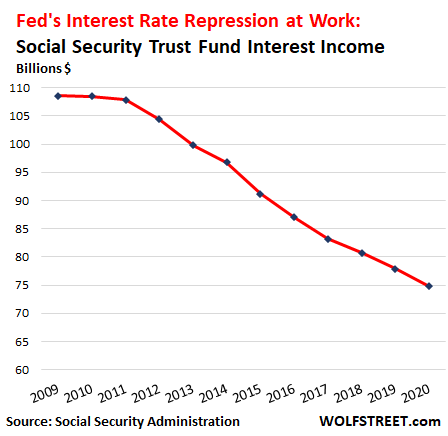 The monthly Social Security payments are adjusted for inflation via annual “Cost of Living Adjustments.” These annual adjustments are based on a formula that uses the “Consumer Price Index for All Urban Wage Earners and Clerical Workers” (CPI-W) in July, August, and September. The Bureau of Labor Statistics will release the CPI for September on October 13. The COLA for 2021 will be set after that. So, just guessing here, based on CPI-W in July (0.96%) and August (1.40%), and the upward trajectory it has been on in recent months, this COLA adjustment for 2021 may be in the 1.3% range.

Actual costs of living for retirees – or really for anyone – are going to increase far faster, depending on where they live, how they live, and where they spend much of their money. Even if the actual cost of living increases by only 1 percentage point faster than the annual COLA every year, after 10 years, 20 years, or 30 years, you’re talking about a serious deterioration in purchasing power of the Social Security payments. Inflation will eat more than retirees’ lunch.

There have been discussions underway for shifting the COLAs from CPI-W to a chain-type price index because they run lower than CPI-W, and therefore in small increments every year, inflation would eat even more into the purchasing power of the Social Security payments.

Someone might be barely able to squeak by on Social Security, and use their savings – if they even have any – to supplement their budget. But each year, this gets harder, and this retiree is going to have to cut back, and cut back, and cut back year after year…. Every time this shift to a chain-type index for COLAs comes up in Congress, there should be a deafening hue and cry from everybody, young and old, because it would weaken Social Security as a safety net.

So, Social Security will be there for you, but…

You can rely on the Social Security payments. But they will lose purchasing power. The purchasing power of the payments will diminish every year, year after year, because the COLAs are not enough to cover the actual increases in the cost of living.

This is just a simple fact, and it’s not an accident, it’s purposefully built into the system. And this decline in purchasing power might shave 20% or 30% off your standard of living over the first 20 years of retirement. If it was tough to live on Social Security early on, it will be brutal after 20 years. And people need to add this into their calculations.

Hypothetical depletion of the Trust Fund.

Depletion of the Trust Fund doesn’t mean that Social Security will collapse or will be “broke” or whatever. It simply means either that workers will have to pay in a little more, or benefits will get cut, or both. Social Security has been fixed before. Raising the maximum amount of earnings subject to Social Security tax would be one way of doing it, and has been done before. And there are other ways. These adjustments will be made – as they have been in the past – well before the depletion date.

The story of the man who told me that Social Security would collapse before he could ever draw on it.

Over the decades, I have heard many predictions about the implosion of Social Security. But here is the one I never forgot because I was at an impressionable age. When I was a senior in high school, the dad of my sweetheart told me that Social Security was a “scam” and that it would blow up before he could ever use it. He was a CPA and had an accounting and tax firm. He passed away a few years ago, after having collected Social Security every month during his retirement. And now his wife is collecting his Social Security survivor benefits. Social security outlived him, and it’s going to outlive me too.

But Social Security was never intended to provide adequate retirement on its own. My solution is to put money aside while working, and work as long as possible – way past retirement age, especially if you have something interesting to do. Look at all these old politicians: They’re all fired up, they’re having a blast, and they’re not about to let go of that much fun, nor of the income from it, unless someone kicks them out. And I too intend to do that – keep working being fired up and having a blast at my evil WOLF STREET media mogul empire until my brain freezes over.

As after the last crisis, fueled by ultra-cheap money, they’re taking financialization of the housing market to the next level. Read… The Big Boys Are Back: Financializing Single-Family Houses