And this is just for April, the very beginning of the Pandemic’s impact on housing.

The onslaught of delinquencies came suddenly in April, according to CoreLogic, a property data and analytics company (owner of the Case-Shiller Home Price Index), which released its monthly Loan Performance Insights today. And it came after 27 months in a row of declining delinquency rates. These delinquency rates move in stages – and the early stages are now getting hit:

Transition from “Current” to 30-days past due: In April, the share of all mortgages that were past due, but less than 30 days, soared to 3.4% of all mortgages, the highest in the data going back to 1999. This was up from 0.7% in April last year. During the Housing Bust, this rate peaked in November 2008 at 2% (chart via CoreLogic): 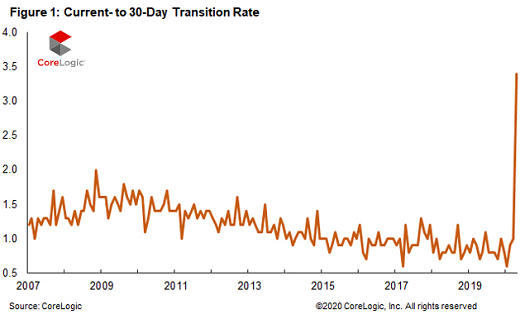 From 60 to 89 days past due: As of April, this stage had not yet been impacted, with the rate remaining relatively low at 0.7% (up from 0.6% in April last year). This stage will jump in the report to be released a month from now when today’s 30-to-59-day delinquencies, that haven’t been cured by then, move into this stage.

Serious delinquencies, 90 days or more past due, including loans in foreclosure: As of April, this stage had not been impacted, and the rate ticked down to 1.2% (from 1.3% in April a year ago). We should see the rate rise in two months and further out.

The overall delinquency rate rose in every state. But there were some real hotspots, in terms of the percentage-point increase in the delinquency rate in April, compared to April a year ago:

The worst hit metros are tourism destinations and New York City where the most devastating and deadliest outbreak of the Pandemic in the US occurred. These are massive increases in the delinquency rates in April:

“With home prices expected to drop 6.6% by May 2021, thus depleting home equity buffers for borrowers, we can expect to see an increase in later-stage delinquency and foreclosure rates in the coming months,” CoreLogic said in the report.

CoreLogic expects to see “a rise in delinquencies in the next 12-18 months – especially as forbearance periods under the CARES Act come to a close,” the report said. To what extent the delinquencies deteriorate further depends largely on the labor market, and on unemployment, and that remains a horrible mess at the moment.

The time for deals on new vehicles has arrived. Read… Moving the Iron amid Sagging Demand: Tesla Cuts Price of Model Y, after Cutting Prices of Model 3, S & X, as Other Automakers Offer Record Incentives.