The time for deals on new vehicles has arrived.

Tesla fired its latest salvo to stimulate demand for its vehicles. But it is not alone; the entire auto industry is now cutting record deals to move the iron in face of sagging demand. 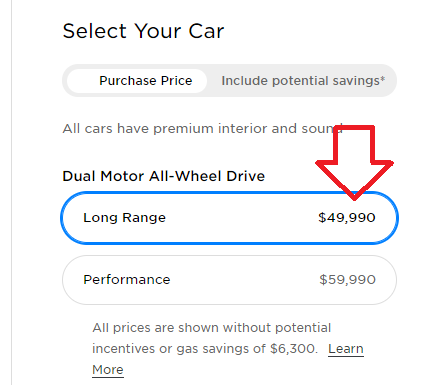 The Model Y is Tesla’s hottest newest model, in the hot category of crossovers, and yet, price cuts are needed to stimulate demand.

Tesla has now cut prices on its entire lineup. At around May 27, Tesla cut the price of the Model 3 by $2,000, and the prices of the Model S and the Model X by $5,000. The price cut of the Model Y shows that the brand-new hot model in the hot crossover category is getting pulled into the maelstrom of sagging demand by US consumers for new vehicles.

Like all automakers, Tesla has to move the iron, and for Tesla, cutting prices is the way to do it. Tesla makes price cuts by quietly changing the price on its website.

Since Tesla doesn’t have franchised dealers that can make their own deals – the retail system that all other automakers are locked into by state franchise laws – Tesla’s posted price is the price buyers pay.

Other automakers rely on incentives that take several forms, including cash rebates to consumers, incentives for dealers to be passed on to consumers, perhaps, and subsidized finance rates. And these incentives in June have hit a record for any month of June.

In June, new car and truck sales in the US were up from the deep-freeze of the prior months but were still dismal. Based on estimates by the Bureau of Economic Analysis, new vehicle sales were down 27% from June last year, the fourth month in a row of steep year-over-year declines: 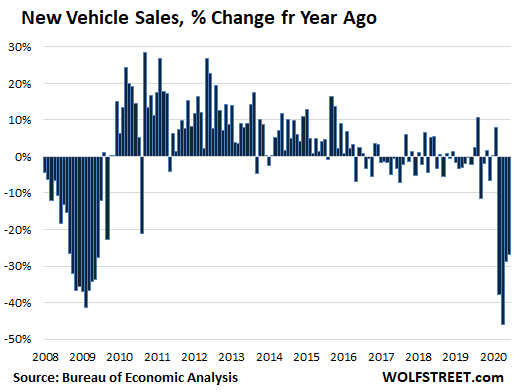 The largest automakers no longer report actual monthly deliveries, so estimates for monthly sales are all we have. But for the second quarter, deliveries were dismal. Tesla doesn’t report US deliveries at all; it only reports global deliveries, and only on a quarterly basis.

And despite Tesla’s Gigafactory in Shanghai that sells prodigious numbers of new vehicles to Chinese consumers, and that wasn’t operational last year, global deliveries in Q2 fell 5% compared to Q2 last year. Based on this math, US sales must have plunged.

Part of the reason for the 27% year-over-year drop in total new vehicle sales was the 69% year-over-year collapse in fleet sales, according to Cox Automotive. Sales to rental car companies are usually the largest fleet segment, but in June, they collapsed by 95% year-over-year.

Rental car companies have been crushed by travel restrictions. Hertz Corporation filed for bankruptcy at the end of May (along with its US and Canadian subsidiaries Hertz, Dollar, Thrifty, Firefly, among others), followed days later by the bankruptcy filing of Advantage, the fourth largest rental-car company in the US.

Rental car companies have cancelled just about all orders that could be cancelled. The last thing they’re going to do – as they sit on a million or so vehicles that are uselessly parked in rented parking lots across the US – is buy more vehicles.

Auto dealers were open in June, but retail sales of new vehicles in June were down 17% year-over-year, according to Cox Automotive. So there was a recovery in June from the deep-freeze of the prior months, but not enough of a recovery.

And the battle of the incentives and price cuts and deal-making is raging to move the iron. Not all vehicles will have fat incentives – such as fast-selling vehicles – but other vehicles have super-juicy incentives.

Tesla’s price cut of the Model Y looks steep for a supposedly hot model in a hot vehicle category. It’s a sign Tesla is now no longer exempt from sagging demand in the US market where hype and true believers alone don’t cut it anymore. And Tesla is using the classic automaker method — offering deals — in order to compete and move the iron. Every car will be sold eventually if you cut the price enough.