The Chapter 11 bankruptcy filing of Hertz Corporation and its US and Canadian subsidiaries Hertz, Dollar, Thrifty, Firefly, Hertz Car Sales, and Donlen – but not its subsidiaries in Europe, Australia, and New Zealand – on Friday May 22 threatens to make a royal mess of used-vehicle wholesale prices, as creditors may take possession of their collateral and dump hundreds of thousands of vehicles on the wholesale market starting in late July, pushing down wholesale prices further and creating further valuation pressures and bigger losses for Hertz creditors, the entire rental car industry, and leasing companies that also have to dispose of their vehicles.

This is the scenario the industry has been dreading for the past 10 weeks or so, when the distant likelihood of a Hertz bankruptcy suddenly became front and center. Hertz has already laid off about 20,000 people, or about half of its global workforce, it said in its bankruptcy press release.

On April 29, Hertz disclosed that it had missed a lease payment on part of its fleet. And this is where it gets interesting, in terms of financial engineering and corporate complexity.

Hertz, which runs the second-largest rental fleet in the US behind Enterprise, owns its fleet in two types of setups: as “program vehicles” and “non-program” (or at-risk) vehicles.

Program vehicles are purchased from automakers under repurchase or guaranteed depreciation programs, where automakers agree to repurchase the vehicles at a set price; or they guarantee the depreciation rate until the vehicle is repurchased or sold at auction. These program cars are more expensive for Hertz. But they have two benefits for Hertz that would now be sorely needed: They shift the risk of the vehicle’s value to automakers; and they allow Hertz to get out of units at preset prices, giving Hertz flexibility in cutting its fleet when it needs to without taking losses.

If Hertz decides to shed some of those vehicles, they’ll show up at the auctions, adding to the supply of used vehicles. But it’s the automakers that will have to take the losses.

The remaining 71%, or 400,000 vehicles, were non-program at-risk vehicles. They’re owned outright by the company, and it carries all the risks.

But wait… here come the “bankruptcy-remote special-purpose subsidiaries” and $14.5 billion in rental-vehicle-backed securities.

Hertz leased these 400,000 vehicles from entities it created and owns – such as Hertz Vehicle Financing II LP, a “bankruptcy remote” wholly-owned special-purpose subsidiary of Hertz. These special-purpose subsidiaries are not part of the bankruptcy filing. But they have securitized these leases of the at-risk fleet into $14.5 billion of asset-backed securities (ABS) as of March 31.

These $14.5 billion in ABS, which are also not part of the bankruptcy filing, are held everywhere, from pension funds to hedge funds and bond mutual funds. The 400,000 vehicles are the collateral.

On April 29, Hertz announced that it missed making the payment on its vehicle operating lease to its special-purpose subsidiary. Thus, the cash flow to the special-purpose subsidiary collapsed, which then cannot pay the holders of the ABS. Hertz was able to negotiate “short-term relief” with the holders of the ABS at the time, it said, but was “unable to secure longer-term agreements” to reduce the payments.

The ABS holders now have a right to foreclose on the vehicles and sell them at auction. But they have to wait for 60 days. So this scenario would commence toward the end of July.

Hertz will likely try to work out a deal to where only part of the fleet is liquidated that would downsize the fleet to a large extent, but leave enough vehicles in the fleet to meet the collapsed travel demand.

Vehicles lose value constantly, even when they’re parked, and dragging this out means even bigger losses for the ABS holders. And they know that too. When those vehicles are suddenly being run through the auctions starting in late July, they will put downward pressure on wholesale prices, further increasing the losses. 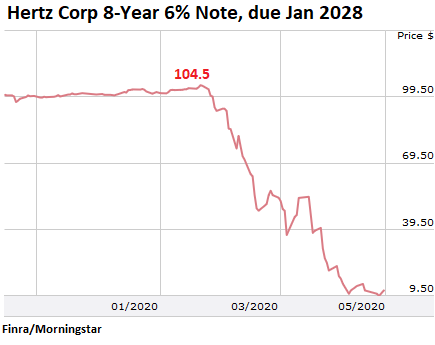 The bankruptcy petition listed $24.4 billion in total debts, including trade accounts payables, and $25.8 billion in assets as of March 31. Much of the asset book values are based on vehicle values. But wholesale vehicle prices dropped 12% in April, according to Manheim, the largest auto auction house in the US. There has been somewhat of a partial recovery of prices in early May, but those Hertz vehicles are hanging dreadfully over the market that is just now starting to unfreeze.

Hertz listed numerous unsecured creditors in its bankruptcy petition, such as lenders, vendors and suppliers. These are the largest five:

The pandemic was what knocked Hertz over the cliff. But it had been teetering near the cliff for years, burdened by its enormous debts and lousy operations.

It lost money in three of the last four years, totaling $447 million. But that profitable year, 2017, was only profitable due to a $902 million income tax benefit, while it had an operating loss that year of $575 million.

The stock market – other than Carl Icahn – has smelled a rat for years.

Competition in the rental car market is huge, not only from other rental car companies but also from rideshare companies. I have been reporting on Hertz’s travails and desperate actions since 2016.

Hertz has been a shitty deal for Carl Icahn from get-go. In August 2014, Hertz shares rose to $109 a share after he disclosed a big stake. And that was the peak. Shares have zigzagged lower, interrupted by huge plunges, each a buying opportunity. And Icahn, through his various entities, kept buying. In the bankruptcy petition, Hertz said that Icahn now owns a 38.89% stake, having bought at ever greater discounts all the way down.

On Friday, shares closed at $2.84. When Hertz disclosed its bankruptcy filing after hours, shares plunged another 36% to $1.82.

It is likely that Hertz will be successfully restructured in bankruptcy court while continuing to operate. But much of its fleet will be liquidated, some creditors will take sizeable losses, and existing shareholders will likely get wiped out.

Immense corporate complexity and the fifth CEO in six years.

On May 18, Hertz announced that it replaced its CEO, the fifth CEO since 2014. The company has made many efforts to restructure its operations but couldn’t pull it off. But it was able to create an immensely complex corporate structure.

The bankruptcy proceedings are going to be very complicated with many potential pitfalls along the way, given the company’s labyrinthine structure of subsidiaries, including those that are not part of the bankruptcy, such as the special-purpose subsidiaries that hold most of the collateral and issued $14.5 billion in ABS. 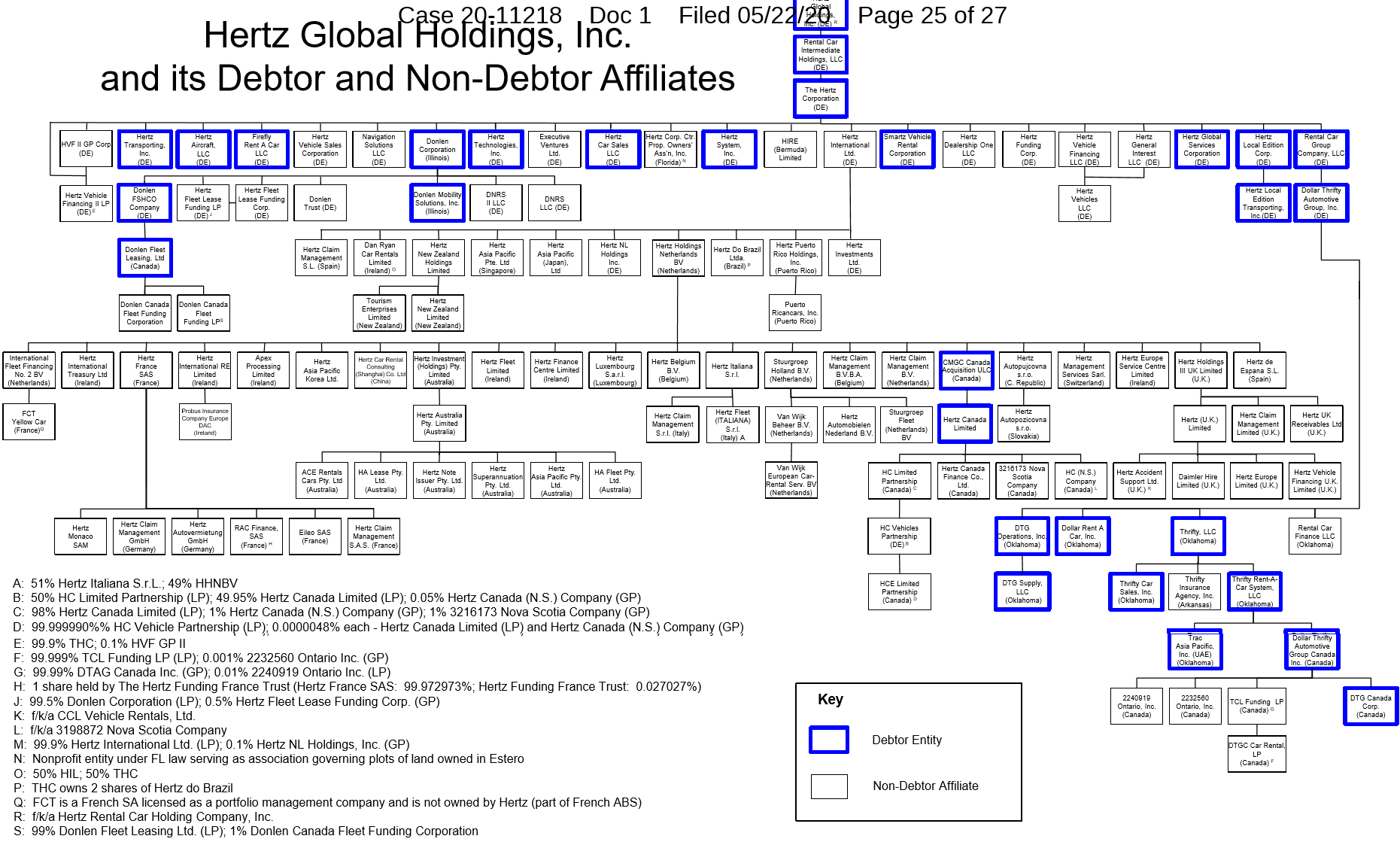 Hertz is a huge customer of various automakers, particularly GM, Ford, and Fiat Chrysler Automobiles. Before the bankruptcy filing, Hertz canceled any still cancellable orders to reduce the influx of new units. Non-cancellable orders may be cancelled in bankruptcy court. For automakers, fleet sales are going to suck this year – not just because of Hertz.

Hertz was ripe and ready when the pandemic hit.

Hertz’s debt problem goes back to its leveraged buyout in 2005, when ML Global Private Equity Fund (an affiliate of Merrill Lynch) and private equity firms Carlyle Group and Clayton, Dubilier & Rice acquired the company from Ford. In November 2006, while the getting was still good, they sold the heavily indebted Hertz via IPO to the public.

But 14 years is a long time, and if the company had tried to reduce its debt load, it could have, including by raising new equity capital by selling shares in follow-on offerings when its share price was still high. But it waited to raise equity capital until June 2019, via a rights offering of $750 million, by which time its shares had already collapsed to the $16-range. Icahn loaded up.

Hertz said that it has tried to obtain a bailout from the US government and from European governments, but that such bailout for the rental car industry “did not become available.”

So Hertz was ripe and ready, and when the pandemic crushed travel in general and demand for rental cars, Hertz popped.

In its bankruptcy press release, the company said that it had “more than $1 billion in cash on hand to support its ongoing operations.” But “depending upon the length of the COVID-19 induced crisis and its impact on revenue,” it may also need to raise additional cash via a Debtor-in-Possession (DIP) loan.

For retail buyers of used vehicles, this flood of pent-up supply suddenly hitting the market may mean that there will be some deals available. A Hertz fire sale will impact the entire market. Many of these units may go through auctions to be sold to dealers around the country. Hertz also sells its cars to used-vehicle dealers, brokers, and wholesalers. And it sells its cars directly to the public in its many retail stores, and it may try to stimulate sales by offering deals.

Now at least, price discovery can take place amid a more ample flow of vehicles. But the entire industry dreads a Hertz bankruptcy could cause lenders to liquidate its fleet. Read… Used-Vehicle Market Starts to Unfreeze, “Pent-up Supply” Looms