Now at least, price discovery can take place amid a more ample flow of vehicles. But the entire industry dreads a Hertz bankruptcy could cause lenders to liquidate its fleet.

The images are cropping up all over the Internet: Parking lots of temporarily shut-down stadiums and shopping malls densely packed with cars, SUVs, vans, and pickups. These are rental vehicles that rental car companies don’t know what to do with because they cannot rent them out because their travel market has collapsed. And some of them are off-lease vehicles that had been leased and whose lease expired. This is just part of the pent-up supply. The longer these vehicles sit, the more value they lose.

They need to be sold at wholesale auctions, but auction volume had collapsed in the second half of March and April because auctions were closed and then switched to digital channels, and dealers had shown little interest in stocking up as their own used-vehicle sales had collapsed. And the whole used-vehicle market sort of froze up. This glut of rental and off-lease vehicles is now waiting for the used-vehicle market to unfreeze. And this is beginning to happen.

By contrast, during the Great Recession, it was new vehicles that jammed up the pipeline, with automakers continuing to build and import vehicles while US consumers had gotten spooked and stopped buying them. Annual sales of new vehicles plunged nearly 40% from 2006 to 2009, before gradually recovering to surpass the total of 2006 eight years later, in 2014.

But this time, automakers have shut down their plants, and the supply of new vehicles has been cut off. What’s piling up is used vehicles from rental car companies and lease returns.

The numbers are huge. US rental car companies have been buying around 2 million new vehicles per year (1.9 million in 2019, according to J.D. Power). They keep them for longer than a year on average, so there are about 2.5 million to 3 million rental cars available to drive on average, with more vehicles in various stages of entering the fleets or being removed from the fleets, this being a constant massive flow of cars, normally. But the drain has gotten plugged up.

The drain being plugged up is a big issue because rental-car use has collapsed. Rental car companies need to shrink their fleets to be inline with demand. Cancelling new orders was the first step, and they already did that. J.D. Power estimates that rental car companies will purchase 1.05 million vehicles in 2020, down from 1.9 million in 2019. Now comes the hard part: selling a big portion of the fleet they have but don’t need.

Hertz is on the verge of bankruptcy. At the end of April, it disclosed it had missed a large amount of lease payments on its rental cars. Since then, it has entered into forbearance and waiver agreements with these lenders that give it until May 22 to come up with the money and a plan. Its cars, now parked at various parking lots around the country, are collateral for this debt.

At the end of 2019, Hertz’s US rental fleet was about 567,000 vehicles. Lenders don’t want to end up with these cars either, especially not in this environment where getting out from under them would be tough and painful, and they’re motivated to work out a deal that would keep those cars off their parking lots.

The entire industry hopes that a Hertz bankruptcy can be averted and that those cars don’t suddenly get liquidated by its lenders.

In the second half of March and in April, the used wholesale market essentially froze. The volume of vehicles going through the auction plunged, as many auctions were shut down and dealers weren’t buying. Prices took an all-time record hit. According to J.D. Power, weekly auction volume collapsed from the 110,000-vehicle range before the crisis to a low 18,000 in the first week of April. But auction volume has started to recover and in the second week of May reached 64,300 vehicles (chart by J.D. Power): 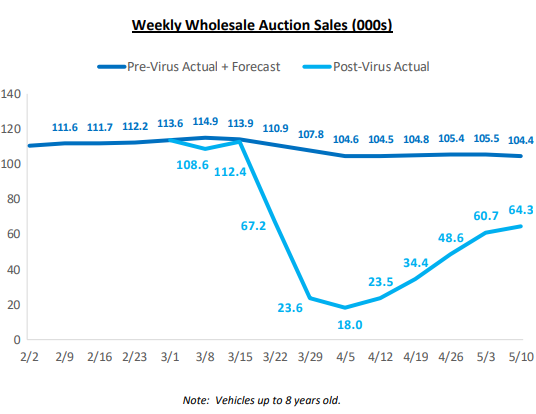 Manheim, the largest auto auction house in the US and a unit of Cox Automotive, reported in early May that used-vehicle wholesale prices, based on its Used Vehicle Value Index, had plunged 12.3% in April from pre-Covid February.

Amid signs that the used-vehicle market is beginning to unfreeze, Manheim reported today that in the first half of May, its Used Vehicle Value Index recovered a portion of the March/April collapse, but remained down 4.8% from May last year: 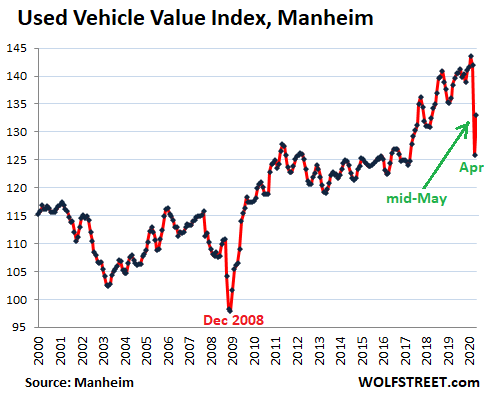 The year-over-year price declines in early May varied by segment, according to Manheim, with the top two on the list, the bread-and-butter units for rental car companies, getting hit the hardest:

Amid further signs that the market is unfreezing: Used-vehicle retail sales were down only 6% year-over-year in the week ended May 14, after having collapsed by 67% year-over-year during the worst days at the end of March, according to a Cox Automotive analysis of DealerTrack transaction volumes on a same-store basis.

New-vehicle retail sales were still down 31% in the week ended May 14, after having plunged as much as 71% during the last week in March.

From a different perspective, J.D. Power reported two days ago that its Used Vehicle Price Index for vehicles up to eight years in age plunged 14.3% in April from March and was down 13.5% from April last year. This index generally experiences a seasonal dip in April from March, but this drop was by far the largest on record: 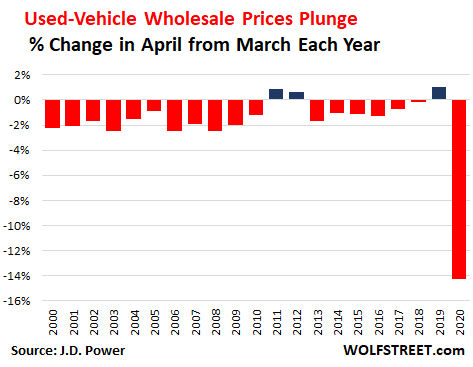 Now the pent-up supply of rental and off-lease vehicles is piling up, as evidenced in myriad photos of rental cars stuffed into parking lots of closed stadiums and shopping malls. These vehicle are waiting to go through the auction.

Total supply of used vehicles (from rental, off-lease, and trade-ins) was 1.17 million units in pre-Covid February, according to estimates by J.D. Power. Then as auction activity froze, supply plunged to just 645,000 in April. In May, supply is expected to jump to 1.21 million vehicles, in June to 1.43 million vehicles, and in July to 1.24 million vehicles.

And this assume that Hertz’s lenders aren’t trying liquidate its fleet during that time.

The surge in supply is composed of a big surge in rental and off-lease vehicles, offset by a decline in trade-ins due to lower retail sales. This scenario would increase supply by about 20% compared to pre-Covid estimates for this time of the year, and it would hit as consumer demand for used vehicles is expected to be soft. J.D. Power expects that this surge in supply, in face of soft consumer demand, will push prices down by 8% to 11% in June compared to its “pre-virus baseline.”

But then, going into the latter part of 2020 and into 2021, the glut of rental and off-lease vehicles will have been absorbed. And going forward, the supply from the rental fleets is going to thin out, as they have shed their excess units and have slashed their new orders. J.D. Power expects that this dynamic will eventually put upward pressure on wholesale prices into 2021, assuming that demand recovers.

This crisis is different from a typical crisis in the vehicle market in that it scrambled the supply of vehicles in addition to creating a classic demand shock. How all this will shake out remains highly uncertain in my opinion. But however this will shake out, now at least the market is unfreezing, and price discovery can take place amid a more ample flow of vehicles.

With tens of millions of people unemployed, even prime auto loans will get messy. Read… Subprime Auto Loans Blow Up, Get Very Messy