Hahahaha, that should have been the universal headline.

Tesla announced this morning – under enormous media hoopla and Wall Street hyperbole – that its global deliveries dropped 4.8% in the second quarter of 2020, to 90,650 vehicles. It doesn’t disclose how many of them were delivered in the US.

But this was the second quarter in which Tesla’s Gigafactory in Shanghai was operating and selling vehicles in China, the largest auto market and the largest EV market in the world. And auto sales in China overall are experiencing pent-up demand after the lockdown and a solid recovery.

Yet, all combined, including Tesla’s new production and sales in China, Tesla’s deliveries still fell 4.8% compared to the second quarter last year.

OK, there is the pandemic, and Tesla’s Fremont factory was closed for a while, and the decline in deliveries needs to be seen in this light.

But hey, as I said yesterday, Tesla “has become a supernatural phenomenon led by a guy who is regularly seen walking on water,” and so I expected more.

Since the Gigafactory came on line at the beginning of this year, and wasn’t shut down in Q2, the year over year comparison of both factories combined, even while the Fremont factory was partially shut down in Q2, should have blown last year’s deliveries away.

But the market doesn’t care about what I expected, and my admiration for Musk’s ability to get sales going in China. Some other folks on Wall Street pretended to expect even lower deliveries, despite the new Gigafactory, and Tesla was able to beat those lowered expectations, and Tesla’s shares soared 7% this morning to $1,228.

So here is my double-WTF chart of the year (updated today mid-morning) that proves beyond reasonable doubt that Tesla’s stock is a supernatural phenomenon despite the decline in deliveries and despite the disappointment in the Gigafactory (share price data via YCharts): 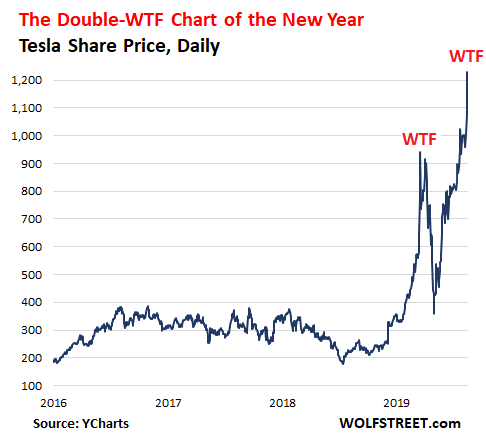 To mark this moment in the history of insane stock prices where a tiny automaker with a global market share of 0.5% and a big loss in 2019 became the most valuable automaker in the world. Read…  Double-WTF Chart of the Year Update: Tesla Becomes Most Valuable Automaker, Blows by Toyota

85 comments for “Despite New Gigafactory in China, Tesla’s Global Deliveries Drop 4.8% in Q2, Much Worse Than I Expected”