There is no recovery for office space. The number of people going to the office has declined over the past four weeks.

The explosion on the scene of work-from-home in reaction to the Pandemic, as measured by people suddenly not entering office buildings, can be tracked by collecting data from access control systems for offices, such as keycards, key fobs, and access apps. And that’s what Kastle Systems – which provides these types of access systems for 3,600 buildings and 41,000 businesses in 47 states – has done.

After the collapse in office occupancy – as people stopped going to the office in March and early April – there was only a slight recovery through mid-June. And then it all came unglued again, and in cities now grappling with a renewed outbreak, such as Dallas, Houston, and Los Angeles, a renewed decline from already abysmally low levels in office occupancy has set in.

From early March through early April, the number of people going to the office collapsed on average by -85%, according to the office access data tracked by Kastle. This ranged from around -70% in Dallas and Houston, to -80% in Philadelphia, to -90% in San Francisco and Chicago, and to a near-total -95% in New York City.

The return to the office, already stunningly slow, has reversed.

Work-from-home is now proving resilient, as is the virus. Since the low point of office occupancy in the beginning of April, there has only been a small rise in people returning to the office. But in late June, progress stalled. And in July, the occupancy rates started regressing in three of the 10 metros tracked by the index: Dallas, Houston, and Los Angeles.

The average of the 10 metros (red line) has dropped slightly over the past four weeks, from 22.7% in the week of June 17, to 21.6% in the week through July 8. I added the black horizontal line for reference.

The metro names on the right can be hard to read – so here they are from the top down: Dallas, Los Angeles, Houston, Austin, Philadelphia, Washington D.C., Chicago, San Jose, San Francisco, and New York (click on chart to enlarge): 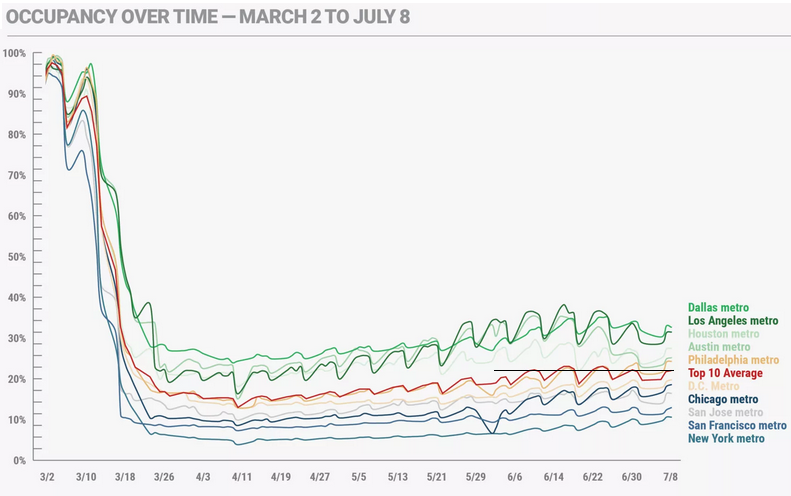 The chart above shows data per business day. On a per-week basis, which irons out some of the day-to-day fluctuations, the top 10 metros in the data are aligned similarly for the week through July 8. The average of the 10 metros, according to Kastle, shows office occupancy running at 21.6% of the pre-Covid era, down from 22.7% four weeks ago. The current rate represents a decline of 78.4% from the pre-Pandemic era. 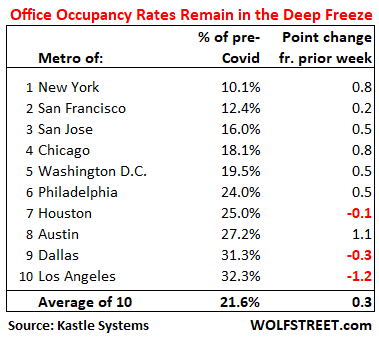 In its prior report a week ago, Kastle expressed its disappointment with the absence of progress in getting people back to the office:

“We originally thought late May would bring a meaningful return to the office, as occupancy started to tick up in Austin, Houston, Los Angeles and Miami, but then saw a brief decline as protests spread across the country and offices remain closed. Cities like Chicago and Philadelphia are now picking up, though Western and Southwestern cities continue to lead the nation in terms of reopening.”

This assessment — “Western and Southwestern cities continue to lead the nation in terms of reopening” — has now been obviated by events as Houston, Dallas, and Los Angeles are now grappling with renewed outbreaks. And office occupancy is dropping.

Work from home gets entrenched as an option.

Some of the factors that keep people out of their offices may be temporary, but there are an increasing number of reports that some of them are becoming permanent – that for at least part of the companies, work-from-home or work-from-anywhere is becoming a permanent feature and even a selling point for new hires, and a way to cut costs for the company.

Numerous well-known tech companies have made announcements to that effect, including Facebook, Twitter, Okta, and Box. Google, which has committed to huge office leases around the world, has switched to work-from-home during the Pandemic, but has remained ambivalent about using that strategy in the future. Apple, which completed its palace that needs to be occupied, and with its penchant for secrecy, will likely buck the trend of work-from-home for many of its jobs during the new normal times.

Many smaller companies have quietly and successfully switched at least part of their office workers to work-from-anywhere and are operating under a remote-first policy.

Credit Karma – now being acquired by Intuit – is, or rather was, headquartered in San Francisco in an office building where it occupies six floors. But in April 2019, it signed a lease for 106,000 square feet of office space in Oakland, and was going to move most of its employees over to the new site, starting in 2020, with some of the people continuing to work in its San Francisco office.

And the longer the Pandemic drags out, the more people and companies are forced to fine-tune their work-from-home methods, which will make work-from-home – or rather work-from-anywhere – ever more entrenched at least as an option, if not a primary choice for many. And the entire office segment of the commercial real estate sector is in for some major upheaval.

Shrinkage in survival mode instead of V-shaped recovery – that’s what airlines face. “It will be more than two years before we see a sustainable recovery”: Delta CEO. Read… Delta’s Passenger Revenue -94%. How it Plans to Stay Alive till “Demand Returns.” Confirms United’s Warning About Newly Waning Demand