Shrinkage in survival mode instead of V-shaped recovery. “It will be more than two years before we see a sustainable recovery”: CEO.

Delta Airlines confirmed today why Warren Buffett dumped his huge stake in mid-crash: Airlines are in an existential crisis, and there is no V-shaped recovery, according to Delta’s earnings report for the second quarter this morning, which was beyond dismal.

There were the huge losses. In the quarter ended June 30, Delta booked a pretax loss of $7.01 billion and an after-tax net loss of $5.72 billion. That translates into a loss of $9.01 a share.

These losses include $2.1 billion in write-downs of its stakes in Latam Airlines and Aeromexico, both of which filed for bankruptcy in the US recently, and in Virgin Atlantic Airways, which may go into “administration” in the UK.

Then there were the revenues, with a breath-taking plunge:

My “Updates from Ed.”

As a “frequent flyer” with Delta, and since the Pandemic broke out, I started getting periodic emails from Delta CEO Ed Bastian, titled “Your Update from Ed,” which generally dive into, among other things, safety in the new era (“face mask requirements,” additional sanitation procedures, etc.) and reminders to be tolerant of chaos (“As flight schedules continue to change, I know some of you are experiencing long wait times when reaching out to our Reservations team…”). I appreciate those previously unthinkable communication efforts.

Their purpose is of course to get me back on a plane. And like many people, I won’t unless I absolutely have to, and I don’t have to. And I can’t if I wanted to: Our trip to Europe this fall is cancelled since Americans, thanks to our ingenious handling of this public healthcare crisis, are now international pariahs under broad entry bans. My wife is still sitting on a ticket to Japan on United and can’t go without submitting to quarantine and other prohibitive requirements once she gets there, and she can’t get a refund, though she was allowed to reschedule the flight to an unknown future date without change fees.

And that’s the airlines’ big existential problem – the total collapse of their bread-and-butter passenger business. Delta had warned about its existential nightmare over a month ago.

Delta responded by radically slashing expenses and capacity – available seat miles were down 85% in the quarter. These efforts have cut its cash-burn rate to $27 million a day. That’s still $2.5 billion cash-burn a quarter.

To survive, Delta received $5.4 billion in bailout funds from the government, paid out in installments. It was able to extend maturities of $1.3 billion of loans to 2022. It was able to sell bonds and take on new loans. In total, including the government funds, it has raised nearly $15 billion over the past four months.

At the end of the second quarter, it had $15.7 billion in cash and short-term investments. Enough cash to last through most of next year at the current burn rate. But Delta will likely be able to cut its burn rate further and raise more funds, including the final installments from the government, and so the survival horizon might stretch further.

No V-shaped recovery, but planned shrinkage.

The business of flying collapsed in two weeks by 95% – the down-slope of the V – but has yet, four months later, to bounce back. TSA checkpoint screenings, which track how many people enter into the secured zones of airports, remain down 73% from the same weekday last year: 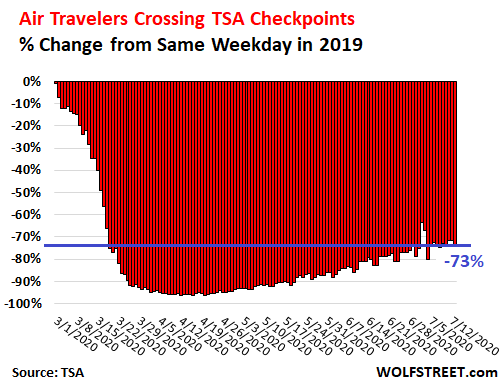 But these airport screenings are lagging indicators of ticket sales. And ticket sales across all airlines and all sales methods started dropping again as a result of the new large-scale outbreaks of Covid-19 in the US, United Airlines warned earlier in July.

Now Delta is singing the same song. This morning, CEO Bastian told the Wall Street Journal that the recovery had stalled, and that as a consequence, the flights that Delta had planned on adding in August will be cut in half, to just 500, providing some detail to Delta’s warning two weeks ago that it would cut the number of flights it had scheduled for August due to lack of demand.

In the quarterly report today, Bastian said, “it will be more than two years before we see a sustainable recovery.”

Delta’s goal for now is simply to stick around in much smaller form in order to still be there and be able to “succeed when demand returns,” it said.

Shedding these planes comes with shedding the people that fly them and take care of them. Today, Delta said it would “proactively manage headcount and rescale operations” via “voluntary separation and early retirement programs.” In late June, Delta said it would send WARN notices to nearly 20% of its pilots, notifying them of potential furloughs. On October 1, the layoff restrictions attached to the bailout funds expire, and then the involuntary layoffs can commence.

With an eye on October 1, and the 60-day-notice requirement for mass layoffs, United already announced mass layoffs to take place on or after October 1, and warned that the “increase in Covid-19 cases is negatively impacting industry demand.” Read… No V-Shaped Recovery for Airlines. Ticket Sales Slide Again. United Announces 36,000 “Involuntary Furloughs”