“Extend and pretend” works wonders for a little while. But with auto loans, it gets dicey in a hurry. And then what?

Nearly all current or former taxpayers below certain income levels received the $1,200 stimulus payment. For a couple, it came to $2,400. If they had kids, more money was added. These moneys arrived in bank accounts in April, May, and June. In addition, there are currently over 32 million people who claim unemployment benefits under state and federal programs. They not only get their regular unemployment benefits but also the extra $600 a week in federal funds. For many laid-off workers, this adds up to more than their wages. This money has been a godsend to people who were behind on their subprime-rated auto loans.

And there was another godsend: “Extend and Pretend.”

Many lenders entered into forbearance agreements with borrowers who couldn’t pay. Much of the publicity about forbearance has been on mortgages, but this also happened with credit card loans and auto loans.

Forbearance means delay in payments – the interest is normally added to the outstanding balance that is to be dealt with later.

There is another thing that happens with a loan in forbearance: It gets marked as “current” on the lender’s books, even when it was delinquent before. Forbearance agreements lower the delinquency rates. Borrowers don’t make payments. But lenders still accrue the monthly interest as income that they’re not getting paid now but hope to get paid later.

The reality is that the borrower has stopped making payments; but the accounting says that everything is hunky-dory. It is now a vast national version of the old banking scheme of “extend and pretend.”

This mix of stimulus money and forbearance has had a magical impact on subprime auto loan balances that are 60-plus days delinquent.

In Fitch’s update of the index for June, something very unusual cropped up. This is a highly seasonal index, where every year going back to at least 2004, April or May is the low point in the delinquency rate, and January or February the high point. And every year, June shows a significantly higher delinquency rate than April.

In April, the rate of subprime auto loans that were 60 days or more delinquent – instead of falling from March as it usually does – rose to 5.13% of total auto loan balances, the highest rate for any April going back to the 1990s. 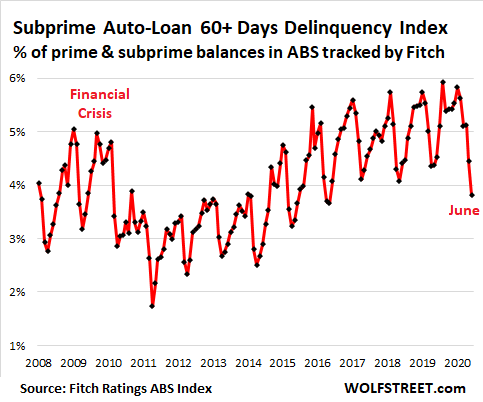 OK, let’s take a look at this phenomenon under the microscope.

The chart below shows a detailed section for the period from April 2017 through June 2020. The blue line connects the four Junes. The green line connects the four Aprils. Note the year-over-year surge in delinquencies from 4.35% in April 2019 to 5.13% in April 2020, the highest for any April in the data going back to the 1990s, and then, instead of the expected seasonal rise, the miraculous drop in June to 3.81%, the lowest delinquency rate since June 2015: 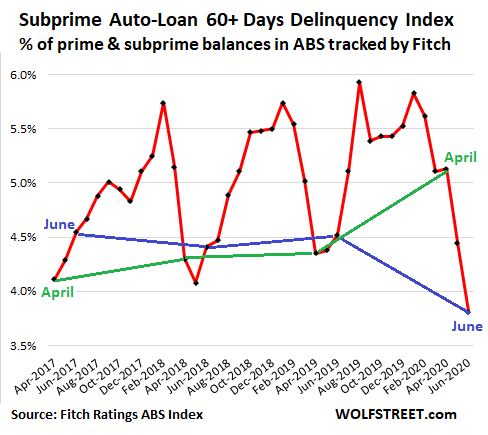 This is the miraculous result of stimulus money, the $600 a week in extra unemployment compensation, and forbearance, none of which are permanent features of our economic landscape.

Stimulus money eventually runs out, and the extra $600 a week expires at the end of July. Extensions or different versions might get concocted in Congress. But even those, if they happen at all, will end.

And “extend and pretend” can get stretched for a while, like a rubber band, but at some point, there is a reckoning. And with auto loans, it gets dicey in a hurry. Forbearance is just a delay, and during the delay, the auto loan balances grow as interest is added to the principal. With subprime auto loans, the interest rates are high, usually into the double digits, and the interest that is added to the principal adds up quickly. But the vehicle – the collateral for the loan – just loses value. With auto loans, lenders cannot play this game for long before they’re even more deeply in the hole.

Over the next few months, during the worst unemployment crisis in a lifetime, we might well see a further miraculous decline in the subprime auto loan delinquency rates, as auto loans in forbearance are market “current.” But then, when stimulus runs out and forbearance ends, it will come unglued with a vengeance.

The time for deals on new vehicles has arrived. Read… Moving the Iron amid Sagging Demand: Tesla Cuts Price of Model Y, after Cutting Prices of Model 3, S & X, as Other Automakers Offer Record Incentives.