Shares go to heck after the mother of all revenue-warnings, plunge 20% in two days, including 7% after hours. Its disclosure confirms Buffett’s decision to dump his airlines in mid-crash.

Delta Airlines came out with the mother of all revenue-warnings when it said in an SEC filing this morning that its revenues in the second quarter, ending June 30, would collapse by 90% compared to the second quarter last year.

In addition to the collapse of demand, it has “experienced significant ticket cancellations” (refunds are counted as negative revenues), and it has waved change fees, which used to be a big profit center, and it is giving out “other refunds,” and they all “have negatively affected our revenues and liquidity, and we expect such negative effects to continue.”

And it cannot predict the effects of this unpredictable future, not even the near-term effects. “The longer the pandemic persists, the more material the ultimate effects are likely to be,” Delta said. “It is likely that there will be future negative effects that we cannot presently predict, including near term effects.”

It added a slew of dismal data points and warnings, along with the hoops it has already jumped through and still needs to jump through to stay in business, including billions of dollars in help from the taxpayer. It was a doom-and-gloom report that not even a sworn doom-and-gloomer would have been able to imagine not too long ago.

Delta’s shares dropped 7.4% during regular hours, and another 7.0% after hours, to $29.40, after having already dropped 7.6% yesterday. It seems, some people knew yesterday what Delta would announce this morning. Over those two days combined, including after hours today, shares have plunged 20.3%.

Delta’s 90%-revenue collapse in Q2 came even as travel restrictions have begun “to ease,” it said.

In response to the collapse in demand, Delta has cut its capacity system-wide by 85%. As demand returns, it plans on rebuilding its flight schedule.

This is an industry-wide problem. According to the TSA, checkpoint screenings at US airports – a measure of how many people are getting on a plane – were still down 86.1% yesterday, compared to the same weekday last year. This has been inching up only in tiny increments. TSA checkpoint screenings over the Memorial Day weekend were down around 87%. During the worst days two months ago, screenings were down 95%: 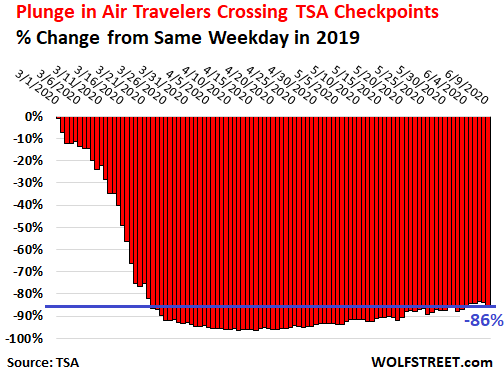 Only a “modest” demand recovery. And some demand destruction could be “permanent.”

Delta said that “we believe” that there will be a “modest continued demand recovery, particularly with domestic leisure travel beginning to return as states lift shelter-in-place orders.” But it expects international demand to “lag” domestic demand.

Demand issues could drag on as private and public sector employers have switched to work form home and are “otherwise dissuading or restricting air travel,” it said.

Conventions, conferences, big sporting events, concerts, and similar events “have been, and are continuing to be, cancelled, reducing the demand for both business air travel (which drives our most profitable ticket sales) and leisure air travel.”

And some demand destruction could be “permanent.” Delta said it cannot predict whether the pandemic “will result in permanent changes to our customers’ behavior,” such as “a permanent reduction in business travel as a result of increased usage of ‘virtual’ and ‘teleconferencing’ products and more broadly a general reluctance to travel by consumers.”

People may be “dissuaded from flying…”

Delta lists some reasons that may dissuade people from getting on a plane, including:

The mad scramble to stanch the cash bleed.

It is already implementing or is considering other cost cuts, “such as deferral of nonessential maintenance, capital expenditure reductions, voluntary early retirement and opt-out programs, hiring freezes, facility closures, deferral of pension funding, and compensation reductions.”

Alas, yup, all these cuts “could also negatively affect our service to customers, revenues and results of operations.”

But hey, this is survival mode. The goal is to reduce the average daily cash bleed “to zero” by the end of the year, it said. To get there, it expects to cut costs further, and demand will have to pick up.

The mad scramble to raise cash.

Delta has raised “more than $10 billion” since early March, it said. At a burn-rate of $100 million a day, as was the case at the end of March, this would have lasted a little over three months. At the burn-rate of $40 million a day by June 30, the breathing room lengthens.

This “more than $10 billion” in cash came from these sources:

Aircraft, “some engines,” and spare parts that have not yet been pledged as collateral amount to “$6-7 billion of unencumbered collateral” that could be used as collateral for more debt, to raise more cash.

Some of the “unencumbered” aircraft might also be sold and leased back. Since March 31, Delta has already raised $1.2 billion from such sale-leaseback transactions. These leases are a form of debt. Delta said it will classify them as “other noncurrent liabilities.” And they can get expensive. But hey, the only thing that matters at the moment is survival.

And it said that it still has borrowing capacity under its revolving credit facilities. The goal is to pile up as much cash as possible to get through this and worry about the mountain of debt later.

This is the most unpredictable future ever.

“Furthermore, not only is the duration of the pandemic and future correlative combative measures at present unknown, the overall situation is extremely fluid, and it is impossible to predict the timing of future material changes in the situation,” it said.

“It therefore is impossible to predict whether any such unknown future developments will occur in the near, medium or long terms, and depending on the duration of the pandemic, such negative developments may occur over the entirety of the event,” it said.

Warren Buffett sold all his airline stocks, including his huge position in Delta in mid-March, when everything appeared to go to heck in a straight line. This was an unusual move for him: Blood was on the tarmac, and that would normally have been a buy-signal. But he dumped his shares.

For him, the entire equation for airlines changed. For him, this wasn’t a short-term blip followed by a steep V-shaped recovery, but a long-term structural issue that would leave the survivors burdened with so much debt and so many uncertainties that the flight path to the new normal, whatever that would be, would stretch over years for the lucky ones. And Delta today confirmed those fears.

Never let a good crisis go to waste. US production of crude steel, #4 in the world, plunged 32% in April. India’s production, normally #2, collapsed 64%. Read... Crude Steel Production: China Blows the Doors off Rest of the World During Pandemic After Already Huge Surge in 2019

131 comments for “The Chilling Things Delta Said about the Airline Business, the 90% Collapse in Q2 Revenues, and Why Some Demand Destruction May Be “Permanent””