No one was prepared for a collapse like this. The data are all over the place. Two government agencies differ by 9 million unemployed. The jobs crisis bottomed in May. But “over 30 million” people remain without work. Making sense of the chaos.

Even Fed chairman Jerome Powell, in his FOMC-meeting news conference yesterday, expressed his bafflement with the chaos in the unemployment data being reported by two government agencies that differ by give-or-take 9 million unemployed, which is huge:

These are huge differences! I believe the main issue isn’t political meddling but that this collapse of the labor market was so massive and so fast with such huge numbers under such extraordinary circumstances, that the normal procedures for tracking unemployment essentially malfunctioned.

This includes seasonal adjustments that went haywire under those conditions, and I have switched to reporting not-seasonally adjusted numbers to dodge those pitfalls.

The Bureau of Labor Statistics, which reported the data last Friday, tracks unemployment via household surveys. It pointed out that those surveys could not be conducted as usual because of the pandemic. Plus, there was chaos over the category of “temporarily unemployed” due to the shutdown. These people should have been counted as “unemployed,” but were misclassified as “absent” from work for “other reasons,” and were not counted as unemployed. As a result, only 21 million people were categorized as unemployed, while according to the BLS, about 25 million people should have been counted as unemployed. You had to read way down into the report to get this.

Then there was the CARES Act, which provided gig workers for the first time with federal unemployment insurance. This Pandemic Unemployment Assistance program (PUA) is administered by the state unemployment offices, but they were not set up to process these PUA claims. Some scrambled to get it done, and others sank into chaos. As of today’s report, about 18 states are still not able to process PUA claims, including Florida.

These PUA claims are already huge: As of today, nearly 10 million gig workers receive benefits under it – one third of total unemployment insurance beneficiaries!

So it boils down to this:

State programs: The Department of Labor reported this morning that 1.537 million new unemployment claims, not seasonally adjusted, were filed under state programs in the week ended June 6. This was down a tad from the new claims in the prior week (1.6 million), but was still over twice the magnitude during the peaks of the prior unemployment crises in 1982 and 2009.

But many people returned to work, as restaurants, bars, retailers and other businesses re-opened. And so the number of people continuing to receive state unemployment insurance ticked down a tad to 18.92 million, not seasonally adjusted (from 19.29 million in the prior week).

State & federal combined: In total, 29.5 million people (not seasonally adjusted) continue to receive unemployment insurance under all state and federal programs combined. This is down from 30.17 million last week, indicating that despite a flood of new claims, more people are getting their jobs back than new people enter into the system.

The stacked chart below shows that the surge of the total number of insured unemployed under federal programs (red) and state programs (blue) combined peaked two weeks ago at 31.0 million and ticked down last week and this week, but remained catastrophically high at 29.5 million: 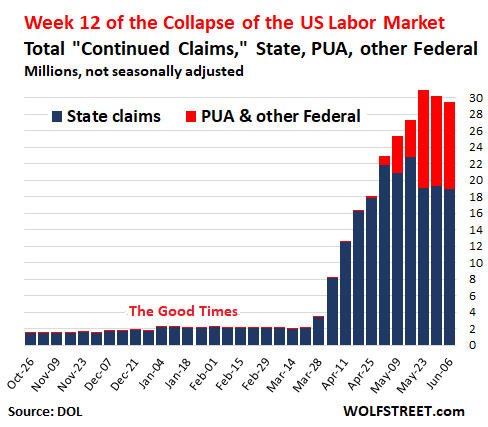 This total of 29.5 million of insured unemployed still understates by some amount the total number of people eligible to receive unemployment insurance because some of the PUA claims have not been processed.

And it understates by some number the total number of people who have lost work because some people who lost work don’t qualify for either state or federal benefits (not long enough on the job, etc.); and while they’re excluded from the claims data and don’t receive UI benefits, they’re still without work.

So there are three points I want to conclude with:

This unemployment crisis appears to have bottomed out in May. While many more people are still losing their jobs, and will continue to lose their jobs, others are being rehired, and the net total in terms of numbers of UI beneficiaries is now declining. This is the second week in a row that we have seen this overall decline.

It’s even worse than it looks. The total number of people who have lost their work – employees and gig workers – and who are still out of work must be above the 29.5 million insured unemployed because many people don’t qualify for any benefits. I don’t know where this final number is, but it is likely well above 30 million.

Until the Bureau of Labor Statistics (Friday’s report) gets its house in order and gets the chaos under control, the least inaccurate reflection of the unemployment crisis is the combined total of continued state and federal UI claims – the 29.5 million – with some number added for people who don’t qualify for either.

So when we say that “over 30 million people” have lost their work and are still out of work, we’re in reasonable territory – and this is at least 10 million unemployed higher than the market-moving shock-and-awe-nonsense from the Bureau of Labor Statistics last Friday.

Shares of Delta Airlines go to heck after the mother of all revenue-warnings, plunge 20% in two days, including 7% after hours. Delta’s disclosure confirms Buffett’s decision to dump his airlines in mid-crash. Read… The Chilling Things Delta Said about the Airline Business, the 90% Collapse in Q2 Revenues, and Why Some Demand Destruction May Be “Permanent”

80 comments for “A Word About the Chaos in the Unemployment Data: Week 12 of the U.S. Labor Market Collapse”