The 20 industries with biggest job losses & the 20 with the biggest gains. The unemployment rate would have been 16% if people had responded to the survey correctly, said the BLS; that would be 25.3 million unemployed. Abysmal.

The total number of jobs rose by 2.5 million in May from April, to 132.9 million jobs, following the April collapse of 20.7 million jobs and the March plunge of 1.4 million jobs. Over the past three months – the period spanning the collapse of the US labor market – employers reported shedding 19.6 million jobs.

This is based on the surveys of employers (“establishment surveys”), released as part of the jobs report this morning by the Bureau of Labor Statistics. The reference period on the survey extended through May 12th. Given the issues with the pandemic, the BLS noted that people were counted as “employed” if they were paid by their employer for any part of the pay period through the 12th, “even if they were not actually at their jobs.”

Below is a table of the 20 industries with the biggest job gains in May, topped by restaurants and bars which reopened in some places, construction sites where work resumed, and healthcare services providers as dentists and others resumed treating their patients.

The table is followed by a table of the 20 industries with the biggest job losses in May, topped by governments.

Industries with the biggest job losses. In the table below, note that the job losses at in the accommodation sector and at airlines were proportionately large, with job cuts in May amounting to about 12% of total jobs in April:

In addition to the “establishment” data, based on employer surveys, the BLS reported the results from the surveys sent to 60,000 households to see what the employment situation looks like from their perspective, which picks up the total number of employed, including gig workers, part-time workers, the unemployed, labor force, and the like.

The number of people with jobs, according to the household surveys, rose by 3.8 million people in May, from April, which includes gig workers and part-time workers. This rise came after the 22.4-million plunge in April and the 3.0-million plunge in March. All combined, over the past three months, the number of employed people has plunged by 21.5 million.

This brought the total number of employed people, including gig workers and part-time workers, according to the household surveys, to 137.2 million, the lowest since October 2002. April had been the lowest since July 1999: 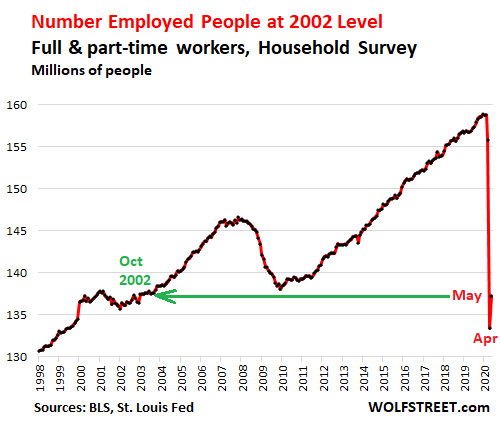 The unemployment rate, according the household surveys, fell to 13.3%, the second highest in the history of the data going back to 1948, after the record set in April (14.7%). 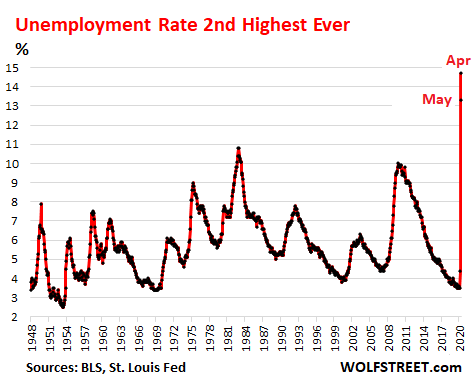 But there are actually 25.3 million unemployed, says the BLS

The unemployment rate would have been higher by “about 3 percentage points,” (so about 16.0%), if the surveys had been responded to correctly, according to a note by the BLS concerning the reporting chaos during the pandemic. This would raise the number of unemployed to 25.3 million (instead of 20.5 million), not seasonally adjusted:

As was the case in March and April, household survey interviewers were instructed to classify employed persons absent from work due to coronavirus-related business closures as unemployed on temporary layoff. However, it is apparent that not all such workers were so classified.

If the workers who were recorded as employed but absent from work due to “other reasons” (over and above the number absent for other reasons in a typical May) had been classified as unemployed on temporary layoff, the overall unemployment rate would have been about 3 percentage points higher than reported (on a not seasonally adjusted basis).

Which professions got hit the hardest in terms of unemployment rate? People in the services industries, including restaurants, retail, nail salons, barbers and hair salons, many healthcare providers, etc., that were shut down. The unemployment rate varies drastically by occupation, from 23.6% in services (includes retail and restaurants) to 5.1% in management, though all major occupations got hit during the pandemic:

The Employment-Population Ratio rose to 52.8% in May, the second-lowest rate in the history of the data going back to 1948, after the collapse in April (to 51.3%). This ratio is the percentage of people who have jobs compared to the overall working-age population (16 years and older). It includes full-time, part-time, and gig workers: 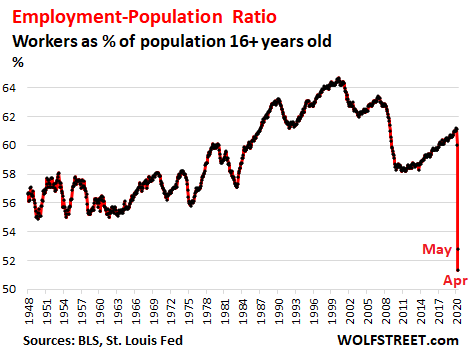 So it’s good to see that the catastrophic collapse of the US labor market has bounced off what hopefully was a bottom, as some people – particularly those working in restaurants, bars, and retailers but also in many other businesses – have returned to work, while continued job losses occur at other operations and hit other people. The overall job market remains in an abysmal condition, though slightly less abysmal, and has a long road ahead to full recovery.