OPEC member Venezuela has one of the largest oil and natural gas proven reserves in the world. It’s the 12th largest producer in the world. It’s still one of the top suppliers of crude oil to the US. Oil produces 95% of Venezuela’s export earnings. Oil and gas account for 25% of GDP. Oil is Venezuela’s single most important product. Oil is its critical source of foreign currency with which to pay for all manner of imported consumer and industrial products. But the price of oil has plunged 35% since June.

Venezuela was already in trouble before the price of oil plunged. The fracking boom in the US and the tar-sands boom in Canada have been replacing Venezuelan imports of crude to the US for years. The Keystone pipeline, if Congress approves it, will replace costly oil trains to move Canadian tar-sands crude to US refineries, making it even more competitive with Venezuelan crude. Shipments of crude from Venezuela to the US will continue to dwindle.

Currency controls have been instituted to shore up the Bolivar. But instead, they’re strangling what is left of the economy. Anti-government protests and riots burst on the scene earlier this year as the exasperated people couldn’t take it any longer. The scarcity of even basic consumer products such as toothpaste and toilet paper has now spread across the spectrum, including medical supplies. Next year, scarcity is going to be even worse. Venezuelan economist Angel Garcia Banchs worries that “what’s coming to Venezuela is chaos that will probably lead to barbarity and people looting.”

It doesn’t help the budget that the government sells its most valuable export commodity at heavily subsidized prices at home, based on a special though iffy deal: the people get cheap energy, and in return, hopefully, they don’t riot, or outright revolt. The hope is that the government gets to stay in power a little longer even as it is going bankrupt.

Yet social spending isn’t going to get cut, promised President Nicolas Maduro on state TV on Friday. “If we had to cut anything in our budget, we would cut extravagances, we would cut our own salaries as high officials, but we will never cut one Bolivar of the money that goes to education, food, housing, the missions of our nation,” he said.

And he did what others leaders around the world do when they run out of money and real options: he promised that he’d create a commission to identify unnecessary spending that then can be cut. The announcement was supposed to infuse confidence into frazzled bondholders.

Nor does it help that the government subsidizes even poorer countries, particularly its ally Cuba, which receives a gift of 100,000 barrels of oil per day. This gift amounts to an annual loss of revenues, depending on the price used to figure it, of several billion dollars.

As Venezuela is bleeding after decades of mismanagement, President Maduro Maduro told his exasperated TV audience that he’d send his economy minister to China. The hope is that China would come up with more money for Venezuela to burn. He talked of big development projects. Miracles are going to happen any day now.

On Monday, the price of oil bounced over $3 to $69.31 per barrel after the steep plunge last week. But it wasn’t nearly enough for Venezuela. It wasn’t even a drop in the bucket. Venezuela needs oil to double in price to get by. Some economists have pegged it as high as $200 per barrel.

So unless the price of oil soars in the shortest amount of time to a level that no economy can sustain without stalling, Venezuela’s government has some unpalatable options:

The markets are not amused. Tangled up in the turmoil reigning in the oil market, the country is headed for default at frightening speed. The chart below shows a whiff of a terrible reality: Venezuela’s probability of a sovereign default has jumped to 83.9%: 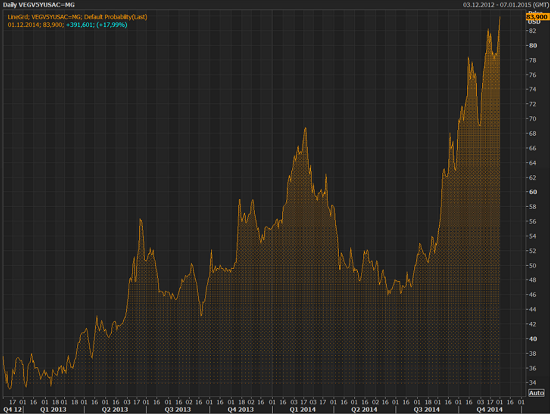 A sovereign default would be messy and very unpalatable for Venezuela. Stiffed and seething bondholders – by now probably hedge funds armed with a battalion of lawyers – would move to attach Venezuela’s valuable assets overseas, such as refineries and oil shipments. It will be chaos for Venezuela.

But this is what happens when a terribly managed economy with huge natural resources gets sideswiped by the shale revolution in the US and tar-sands production in Canada, and by Saudi Arabia’s desperate response to it.

Venezuela got hit by friendly fire, so to speak: OPEC’s decision, or rather Saudi Arabia’s decision, to maintain output at the current rate in an effort to bring down the price of oil to knock the wind out of the US fracking boom by making it unprofitable. And the bloodletting is spreading. Read…   Saudi Arabia Declares Oil War on US Fracking, hits Railroads, Tank-Car Makers, Canada, Russia; Sinks Venezuela

5 comments for “Oil War Pushes Venezuela Over Brink, Probability of Default Soars to 84%”