Holy moly, that was fast. Too fast. Desperate Fed rolls out biggest bazooka yet. 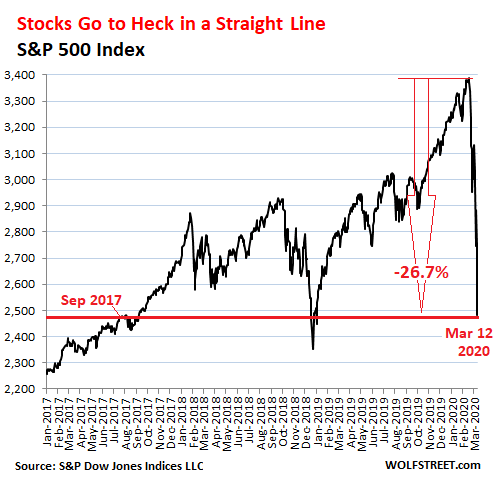 So, shortly before the market closed, I covered my short positions I’d taken out on December 30, when I shorted the ETFs SPY and QQQ, for reasons that I spelled out here at the time. I’ve had enough. This kind of volatility gives you a queasy stomach day after day. Here is what I got today:

To summarize the experience that came with having published for the first time ever a trade I’d made – a contrarian trade that I’d taken out near the peak of market euphoria when most folks thought I was nuts – I will quote from our illustrious and often hilarious WOLF STREET comment section.

A commenter asked a few days ago: “Wolf, how are your shorts?” – and among the replies was elysianfield’s who said laconically in my place: “Stained.” And that’s about the truest thing ever said.

Folks, looks like we’re in the middle of a crash. But nothing goes to heck in a straight line, as proven and documented beyond doubt by our 15 oz. WOLF STREET beer mugs that can be used as shot glasses on days like these, as has been suggested by our illustrious commenters.

More seriously, here is why I covered my short positions:

One, I’ve had enough. I hate shorting. It makes me nervous. The risk-reward relationship is out of whack. Many people consider it a despicable heinous act when you bet against them. And you’re mocked when it blows up in your face. Back in the day, I swore I would never short again. But then I did it anyway. Now I’m relieved I’m out of it.

Two, look at the chart. It shows the percentage change of the S&P 500 index compared to the prior trading day. Note the horrendous volatility, the violent bear-market-bounce days (green columns). We’re due for another bounce-day, and this one could be humongous: 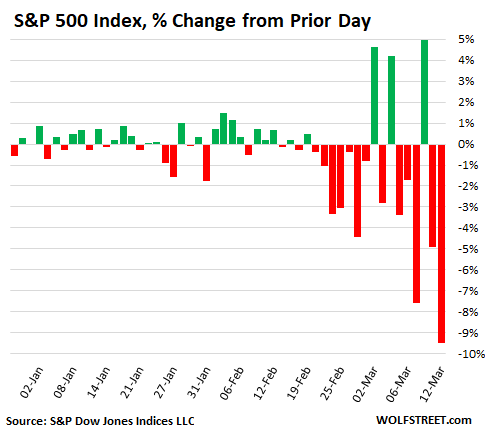 Three, the Fed rolled out its biggest bazooka ever. It announced today that it will use the repo market in a big way to try to support whatever needs support. In addition to the increases in its repos announced in prior days, this afternoon it rolled out its giant bazooka, which I will address in a separate article shortly. We’re now talking trillions of dollars.

So, while I was at it, I bought some of the worst beaten-down crap for a short-term trade that I hope to unwind over the next few days without getting drawn and quartered: The most beaten-down airlines, a sunk cruise-ship operator, a crushed automaker, abandoned hotel REITs, a crushed aircraft maker, a near-collapse shale-oil driller, a wrecked rideshare outfit, an internet furniture-retail cash-burn machine, etc. I would not want to have this stuff in a long-term portfolio at this point, but heck, the market is ready for a fake bounce.

Please don’t follow me in my footsteps. Watch the spectacle from a safe distance. I’ll try to entertain you with the results. And if you did do the same thing, and we both get our faces ripped off, please don’t blame me. This market is crazy: it was crazy on the way up, and now it’s unwinding in an equally crazy manner. And no one knows what comes next.

Of immediate concern is how much cash Boeing is burning due to the 737 MAX fiasco and now the coronavirus, and how much cash it can pile up to avoid a liquidity crisis. Read... Boeing Crashes: $43 Billion in Share Buybacks Turn into Existential Threat

161 comments for “Stocks Crashed. I Covered My Short Positions (SPY, QQQ) Because “Nothing Goes to Heck in a Straight Line.” Out of Spite, Bought Some Crap for a Bear-Market Bounce”