The Fed is going nuts trying to contain this.

Thursday early afternoon, during the chaos when the S&P 500 was down nearly 9%, what would turn into the worst single-day stock market sell-off since the 1987 crash, the Fed rolled out its fastest mega money-printer yet, after its smaller money-printers malfunctioned. It’s not going to be a long-drawn-out QE – though there is a component that is just that – but it’s going to be trillions of dollars, essentially all at once, front-loaded, starting today, though today fizzled already.

This is the Fed’s latest effort to bail out Wall Street, the cherished asset holders that are so essential to the Fed’s “wealth effect,” all repo market participants, the banks, and the Treasury market that suddenly has gone haywire. Lots of things have gone haywire as the Everything Bubble unwinds messily.

Last week, the 10-year Treasury yield had plunged toward zero during the stock market sell-off, which was crazy but in line with the logic that investors were all piling into safe assets, and early Monday morning it fell to an unthinkable all-time low of 0.38%.

But then, the 10-year yield more than doubled from 0.38% at the low on Monday to 0.88% at the highpoint on Thursday. That the 10-year yield spikes during a stock market crash is somewhat of a scary thought. It means that both stocks and long-dated Treasury securities are selling off at the same time. And that probably made the Fed very nervous.

For stocks, Thursday was the 16th trading day since the S&P 500 peak, and in those 16 trading days, the index has crashed nearly 27%. 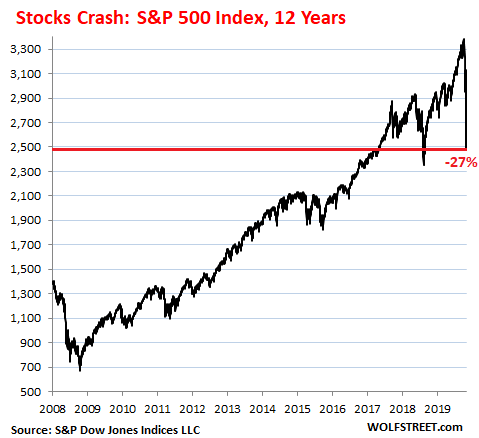 Late last week, demand for repos had increased. And earlier this week, as markets came further unglued, the Fed shoveled more cash into the repo market.

These increases are reflected on the Fed’s weekly balance sheet released today. Repos soared from $143 billion two weeks ago to $242 billion, nearly back where they’d been on January 1 ($256 billion). Note how the repo balances had been declining from the beginning of the year, dropping by 44%, until the stock market began to crash and the Fed opened the vault: 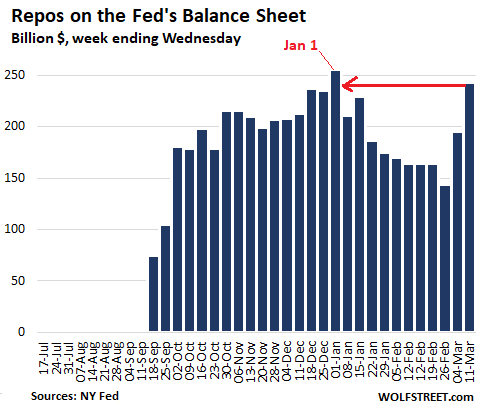 And it didn’t work. So Thursday morning, the Fed threw more cash at the market:

And stocks just continued to crash.

So the Fed rolls out its fastest mega-money-printer ever.

Thursday early afternoon, the Fed announced in a surprise shock-and-awe move that it will use the repo market in a big way to try to prop up and inflate whatever needs propping up and inflating. It will offer a series of $500-billion term repos at least through April 13, amounting to $4.0 trillion in new money over the four-week period.

On Thursday at 1:30 p.m., it offered $500 billion in three-month repos, to settle on Friday. But it fizzled: Of this offered amount, only $78.4 billion were accepted, perhaps because market participants weren’t able to come up with that much collateral that quickly or because they didn’t want that much cash.

This surprise announcement of the $500-billion offer caused the S&P 500 index to spike 6% in 15 minutes. But when it emerged that only $78.4 billion had been taken, it succumbed again.

On Friday, the Fed will offer $1 trillion in repos: $500 billion in three-month repos and $500 billion in one-month repos. That’s a heck of a lot of bucks to print in just one day. But no problem for the new mega-money printer. If anyone wants this much, it can print it.

This will continue in each week, the same procedure of $1 trillion a week plus all the other repos, through Monday, April 13.

If all these $500-billion repos starting Friday are accepted during the period, minus this Friday’s one-month $500-billion repo that will unwind on April 13, they would amount to $4.0 trillion.

In total, this would amount to nearly $4.5 trillion through April 13 that the Fed is offering to create to bail out Wall Street, repo market participants, the asset holders, the banks, and Corporate America. It would more than double the already re-ballooned balance sheet (currently $4.3 trillion). It could push the balance sheet to nearly $9 trillion by April 13.

This is apparently the price of trying to maintain the insane Everything Bubble that the Fed has created since 2009.

It may well be that there is neither enough collateral nor enough demand for cash to come anywhere near those amounts. Repos works differently than QE. Under these repurchase agreements, the Fed offers to buy securities, and if there is not enough demand for cash, or not enough collateral to cover this much cash, then the repo auction will be undersubscribed.

This was the case on Thursday, when the first $500-billion repo was way undersubscribed, with only $78.4 billion being accepted. The rest of the cash the Fed offered found no takers.

So that total amount of cash that will actually get poured into the system may only be a small fraction of the theoretical $4.5 trillion offered over the next four weeks. It may turn out to be just a guarantee by the Fed that there will be enough if there is enough demand for it, and enough collateral to cover it.

Holy moly, that’s fast. Too fast. Desperate Fed rolls out biggest bazooka yet. Read... Stocks Crashed. I Covered My Short Positions (SPY, QQQ) Because “Nothing Goes to Heck in a Straight Line.” Out of Spite, Bought Some Crap for a Bear-Market Bounce

226 comments for “As Everything Bubble Implodes, Frazzled Fed Rolls Out Fastest Mega-Money Printer Ever, up to $4.5 Trillion in Four Weeks”