A gigantic spike at the very end after two of the craziest trading days I’ve seen. Here’s how my trades went. But that’s it for me. I’m staying out of this market, it’s just too crazy.

Holy moly, that was fast and whiplash inducing. Today, the S&P 500 exploded higher by 9.3% to 2,711, nearly erasing yesterday’s 9.5% plunge, which had been the steepest plunge since the 22.6% DOW collapse on Black Monday in 1987, which had been the steepest in history. Today’s action was a classic bear-market rally. Even I could see it coming after yesterday’s plunge. “That was fast, too fast,” I mused yesterday, as the S&P 500 Index was going to heck in a straight line. But that is simply not possible, according to our proven-beyond-a-scintilla-of-doubt and utterly indisputable WOLF STREET beer-mug dictum: “Nothing goes to heck in a straight line.” 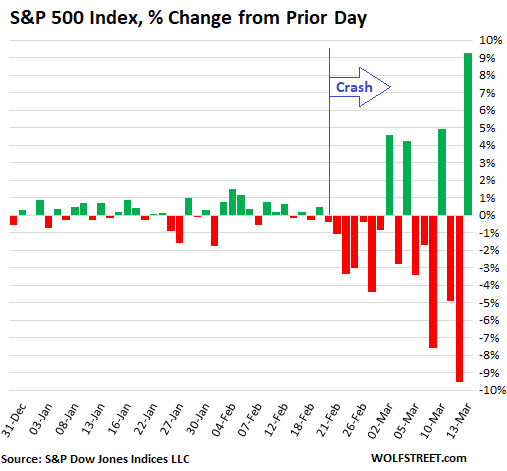 But these moves are not surprising, according to our beer-mug dictum: “Nothing goes to heck in a straight line.” And just when you think the beer mugs are wrong, the market snaps back violently and proves them right. During the Financial Crisis, as stocks were crashing, the violent one-day-wonder-bounces were a sight to behold, with several exceeding 10% — in the middle of a crash!

This is typical of most crashes, especially now with algo trading being dominant, and with stock markets being equipped with “circuit breakers” that are supposed to prevent that kind of bottom-fell-out-event that we saw in 1987 (-22.6% on Black Monday).

I consider today’s event a bear-market bounce that confirmed that we’re in the middle of possibly a historic crash, given the already historic volatility, the historic level of stock-market overvaluation in February, and the challenges facing the economy and businesses, of which we’ve only seen the first signs. So today’s bounce was not a good sign in my book.

And one more thing, over half of today’s jump came in the last 30 minutes of breathlessly frenetic and chaotic trading. It was completely nuts minutes before the close, with stock prices on my screen jumping all over the place.

After today’s violent bounce, the S&P 500 has now dropped 20% over the past 17 trading days and is back where it had first been in January 2018. 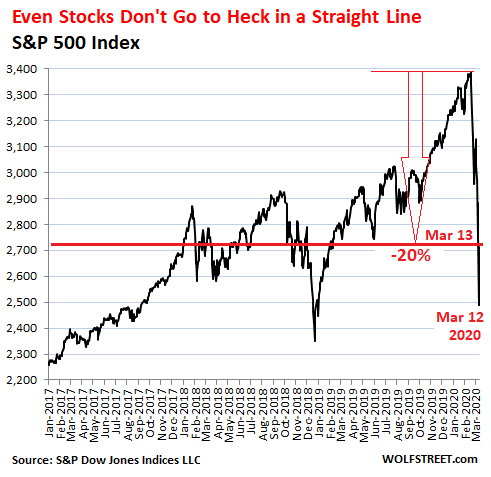 Like many human and algo dip-buyers  – no “Plunge Protection Team” required – I reacted in two ways to the historic plunge shortly before the close yesterday: One I covered my short position that I’d taken out on December 30; and two I bought, as I said, “some of the worst beaten-down crap for a short-term trade that I hope to unwind over the next few days without getting drawn and quartered.”

And I added, “Please don’t follow me in my footsteps. Watch the spectacle from a safe distance. I’ll try to entertain you with the results.” This afternoon, I unwound all those trades. So here we go with the results.

When I started selling, the market was up about 4%. At the close, it was up 9.3%. I missed much of that end of the frenetic spike because I wanted to make sure I got all this crap unloaded before the close. The worst piece of crap stock in my lineup surged over 70% in the last few minutes! And this reeked of manipulation.

Not everything was a win at the time I sold. It was chaos at the end. Ten minutes later, they would all have been the hugest winners. Yup a few minutes made a year’s worth of difference today, which is another sign of how nuts this market is. So these are the results:

So folks, the way I see it, we’re in a historic market. We’d been in a historic run-up through February, amid historic stock market euphoria, reaching historic bubble highs during a period of languid global growth. And now we’re already in a historic crash, in terms of volatility. We’re facing the bit-by-bit shutdown of parts of the economy not just in the US but globally, with governments and central banks lining up bailout programs for companies, homeowners, banks, and others. That’s how bad it is – unprecedented really.

And even if all this blows over by summer, the consequences will linger for a long time, and some shifts and changes will become permanent.

As me for me, I’m going to stay out of this market for now, because this is just too crazy for me. And I’m going to watch it from a safe distance.

The Fed is going nuts trying to contain this. Read… As Everything Bubble Implodes, Frazzled Fed Rolls Out Fastest Mega-Money Printer Ever, up to $4.5 Trillion in Four Weeks