Why are these trends so long and so big — both, up and down?

My early experience with silver gave rise to decades of observations that have formed my theory about the price cycles of gold and silver versus the US dollar. My first big loss – “big” only in percentage terms since I was just starting out – was with silver in the early 1980s. I did all the right things: I researched it; I bought physical silver; and I bought after it had crashed 70% from its spike. The spike had been caused by the Hunt brothers’ efforts to corner the silver market – manipulation of precious-metals prices being as old as the precious-metal trade itself.

Silver had spiked to over $45 an ounce. After it collapsed, I saw an opportunity. I bought at $14 an ounce in early 1981. Then I learned the meaning of “catching a falling knife.” Silver continued plunging to around $5/oz, for me a 65% paper-loss. It then experienced a surge of nearly 200%, to where I was, briefly, in the black, and euphoria set it. After which I learned the meaning of “dead-cat bounce” as silver plunged again. In 1984, I sold at $7 an ounce, my first-ever 50% loss. I annotated those events in this chart by Goldbroker.com: 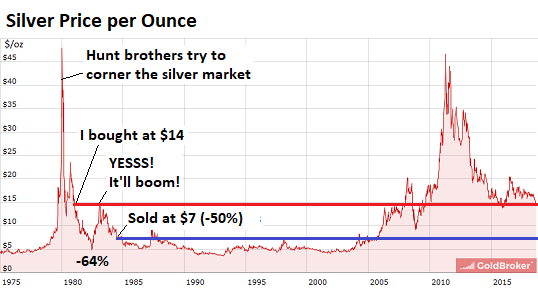 For me to come out even, I would have had to sell at the peak of the dead-cat bounce in February 1983. The next chance to sell at break-even came in early 2007.

Then came the epic rally that mirrored the handiwork of the Hunt brothers. After its collapse, silver is back where it had been when I bought after its collapse in early 1981.

This trade is denominated in US dollars, which has lost 65% of its purchasing power since 1981. So if I had held on to my stash of silver and sold today, in real terms, adjusted for the 65% loss of the dollar’s purchasing power… Well, you see where this is headed. The $14/oz I’d get today would buy only a small fraction of the $14/oz I put into the metal in 1981.

In addition, I would have never collected a dime in interest to compensate for the loss of purchasing power.

The only way I could have come out ahead is hang on to my silver until early 2011, then with perfect timing, sell at near its peak.

There are important and valid reasons to hold precious metals (PMs). Some of these reasons have little to do with PMs as a profitable investment or trade, but they’re beyond the scope of this discussion. I want to focus on why these enormous price movements – up and down – are special, why they last so long, and how a long-term investor might look at them.

It boils down to time – a long time.

As evident in the charts above, the large price movements take place over many years. There are huge brief bounces on the way down, and big brief drops on the way up. PMs are very volatile, and so there is a lot of money to be made betting short-term in both directions, a very risky game.

But for long-term investors, there is a different story: Uptrends are glorious and can last a decade. But once the downtrend sets it, it can outlast a normal investor’s time horizon. Gold stayed below its 1980 peak for 20 years years of pain and suffering, until 2001. The subsequent surge lasted a decade and was breath-taking and intoxicating. Then it all re-collapsed. Now we’re only seven years into the downtrend….

Why are these trends so long and so big?

PMs are not commodities like oil, wheat, or lithium that get burned, eaten, or used in industrial processes and products. In typical commodities, when prices surge, producers produce more to make hay while the sun shines, so to speak. When the price surges past a certain point, demand falls off and a glut sets in. Prices plunge below the cost of production for long enough to where some producers go under. Others cut back. Production drops. This happens even as the collapsing price causes demand to rise. Falling production and rising demand work through the glut, the market tightens, and prices recover.

But this mechanism doesn’t work with gold at all and works only in a limited manner with silver. The metals are not (generally) eaten or burned. There is little industrial demand for gold; and what little gold is used for industrial purposes is often recycled. There is more industrial demand for silver, but only part of the production goes into industrial demand, and some of that gets recycled. The rest is hoarded. Much of the gold and silver that has been mined over the past thousands of years is still above ground in form of gold bars, gold and silver coins, jewelry, utensils, decoration, art, sarcophagi, and what not.

The term “consumption” is used a lot in gold-and-silver lingo, but it’s a misnomer for gold. When investors buy gold, they’re not consuming it. They’re hoarding it. Same principle applies when investors buy silver to hoard it.

So even when the price collapses below the cost of production for the lowest-cost mines, and subsequently production collapses, the massive stash of gold that is already above ground doesn’t go away. And with silver, the supply being hoarded as PMs gives the market a lot of supply and flexibility.

This changes the pricing dynamics and lengthens the price cycles of gold and silver.  It is why prices can soar beyond all wildest dreams. There are no “rational levels” for the price of gold. Sky-high gold prices don’t impact the real economy: People are rebelling in the streets if they cannot afford to buy bread; but no one is rebelling when gold hits $2,000/oz. At the same time, there is no rational minimum price for gold, and the cost of production is irrelevant on the way down.

As we have seen from the example of the Hunt brothers, price manipulations are rampant in the PM markets. But they’re rampant in every other market as well, and in no market as rampant as in the vast credit markets, particularly the government bond markets, where central banks with the tools of monetary policy, such as interest rate policies and QE, openly manipulate yields and therefore prices.

So for investors who buy and sell gold and silver to make a profit, there is a rule: Buy low and sell high.

I tried to do this the first time and failed. If you fail to sell high, and you get sucked into the subsequent crash, you might have to wait a decade or two decades just to get back where you were in nominal terms. But in the interim, there is no yield to compensate you for the loss of purchasing power of the dollar. You’ll get screwed by two factors: The drop in price of PMs and by not being compensated for the loss of the  purchasing power of the dollar!

Traders can benefit from the volatility. But for long-term investors, it boils down to years and decades. They need to wait long enough for the downturn to play out and not grab a falling knife. The current downturn is only seven years into the down cycle. The last downturn in gold lasted from the end of 1980 to 2001. That’s 20 years!